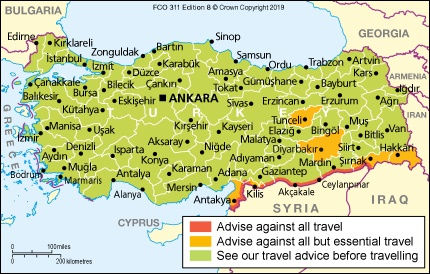 Do you have a family holiday to Turkey booked? We can imagine may of you do, as it’s a lovely destination for sun, sea and sand.

2.3 million people from the UK visited Turkey in 2018, and most of these people enjoyed a wonderful, trouble-free holiday. However, the UK government has updated their travel advice for travellers to Turkey and it is imperative that you are aware before you decide to travel. Government travel advice is very important as it takes into account situations that could potentially cause problems for UK citizens.

Turkey is carrying out a military operation in north-eastern Syria, which has led to tensions in border areas.

The FCO is advising against all travel within 10 kilometres of the border with Syria, except for the city of Kilis. They’re advising against all but essential travel to Sinark, Kilis (and Kilis City) and Hatay Provinces, as well as the provinces Diyarbakir, Tunceli and Hakkari.

The Foreign and Commonwealth Office (FCO) is asking that anyone visiting Turkey remains ‘vigilant’. This means that if you go to Turkey, you should be aware that there are increasing tensions in Turkey due to the death of Iranian General Qasem Soleimani in Baghdad on the 3rd of January. The FCO have stated that this means there is a potential threat towards ‘western interests’ and that the security situation could change with little warning, so holiday makers must be vigilant in crowded places popular with foreign nationals, especially during festive periods and cultural events, and also they should continue to keep updated with developments by following events via the media.

If travellers are in any provinces bordering Syria, the FCO advises that you remain extremely vigilant and check the media regularly for updates.

The FCO have released this statement:

“Terrorists are very likely to try to carry out attacks in Turkey.

Terrorist groups, including Kurdish groups, Daesh (formerly referred to as ISIL) and far left organisations, continue to plan and carry out attacks.

“Further attacks could be indiscriminate. Most attacks have taken place in the south-east of the country, and in Ankara and Istanbul.

While there is a potential that citizens from western countries may be targets or caught up in attacks, particularly in the major cities, attacks are most likely to target the Turkish state, civilians and demonstrations.”

Here is the key advice from the FCO:

Stay safe, everyone. If you have a holiday to Turkey booked and you think that it may be affected by this situation, please contact your tour operator as soon as possible for further instruction.