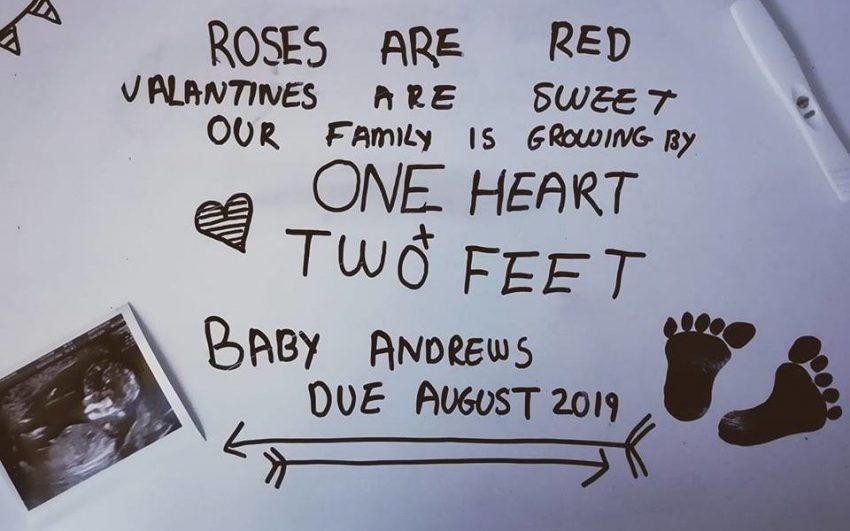 A Rather Unexpected Surprise

This last year has been a whirlwind with being pregnant and the arrival of our second daughter, Ryver, in June. After adjusting to 2 under 2, we decided to focus on building our life for the near future. Getting married, building a home, creating our careers.

Whilst life could be hectic at times, we finally felt balanced and like we had a handle on things. Then life threw us a serious curve ball…..

As all women know, it can take a while for hormones and your body to settle down postpartum. Especially after two close pregnancies. So everything was still a bit irregular and my perfect predictable cycles were a thing of the past. However, determined to avoid any surprises we did everything possible to ensure this year was baby free!

The human body is a weird and wonderful thing, with many PMS symptoms mimicking that of early pregnancy. It was certainly taking a while to get used to “non-pregnant” mode again after 2 years! I even took monthly tests to ensure we weren’t missing anything… It’s safe to say we definitely did not want another addition anytime soon. Thankfully even when things didn’t work to a schedule, those monthly tests gave us the reassurance we needed. Everything was on track!

During the last few weeks of December I started feeling a bit off. Just tired and not 100%. But having 2 under 2 can definitely cause all of the above, so I just brushed it off. Back in November we experienced a brief scare, but again, were reassured by a negative test and the fact that I had taken the morning after pill well within the allocated time frame. So with pregnancy off the cards, I decided to see if it settled down with some rest.

December soon arrived, I still wasn’t feeling right but the Christmas season is just plain exhausting. However, it had been two months now and with more negative tests and no clear explanation I decided it was time to head to the Dr’s.

After much explanation, they simply put it down to stress and children but said to check back with them if anything got worse. By this point I was starting to get the odd patch of nausea and we were both getting anxious having no answer. So we decided to take one more set of tests. What harm could it do?

Thinking nothing of it, I took the test whilst Rory was doing dinner. For an instant I felt sick to my stomach, then realised I had been looking at the wrong line. Laughing and relieved, I joked about it to Rory and said he could check if he wanted to but it was all fine. Not wanting to leave anything to chance he went to the bathroom to check the test for himself.

I then heard from the bathroom “erm Amy you do realise there are two lines on this right?”, I responded with laughter since he was clearly joking. I had checked it myself. Rory brought it out and held it in front of me “Look there are two lines..” he said. I couldn’t see it. Maybe if you super squinted and held it up to the light. But that was at a push. He was just being paranoid.

We spent the next hour squinting at it, holding it up to lights and trying to figure the damn result out. He was convinced it was positive, I was convinced it was negative. Nobody had a clue! So to solve matters I arranged a blood test at the doctors. Negative. So that ruled that one out! At somewhat of a loss as to why I kept experiencing cramps and pain the Dr’s scheduled an ultrasound to try and rule out any internal causes.

Sitting in the waiting room felt surreal, we were both anxious but more now to see what the real cause was. All the tests were negative so pregnancy certainly wasn’t on our minds. I had already had my appendix out, which really only left a few options.

We were called in, I took up that familiar position on the bed and tried my best to relax. It was at this point that our whole world was flipped on its head. From behind the monitor came a few questions “So all of your tests were negative? Including the blood tests? ” A silly question I thought. Obviously they were otherwise we wouldn’t be here… I answered with a curious “yes, why?”. “Because we have found the cause of all of your symptoms…” she said as she turned the screen to face us.

My stomach fell through the floor. Two words running over and over in my mind. Not again. Not again…. There on the screen sat a very familiar shape and blob flickering away…. “Seems like the tests were wrong. Congratulations, you’re approximately 8 weeks pregnant”.

Shocked was an understatement. All I could do was lay there and feel the panic rush over me. This couldn’t happen. This wasn’t allowed to happen. How could it happen when everything was so stacked against the odds….. It explained everything but still….. This wasn’t allowed to happen. Yet it was and just as we had done the first time we had to buckle up and deal with it. We couldn’t just bury our heads in the sand.

That evening we were both a bit dumbfounded. Not knowing whether to laugh at the odds or break down into tears. How the hell were we going to do this? Three under 2….madness. One particular question weighed massively on our minds. What the hell were our parents going to say?!?!

We would need a new car sooner than expected, there was the mountain of paper work to sign, appointments to attend and the looming threat of having to tell everyone I had somehow managed to get pregnant for the third year in a row…….

8 weeks already….That didn’t leave long for flu jabs, blood tests, booking appointments and scans…. With Ryver we had waited 6 long weeks. This time we got only 4. Four weeks to get our heads around things. Four weeks to figure it all out and prep for round 3. It’s safe to say neither of us was ready.

Endless amounts of questions, anxiety, stress yet joy and excitement occupied those last few weeks. Whilst this certainly is a shock neither of us were expecting, it by no means that this baby will not be loved or wanted. We know with time we will loose the anxiety and the excitement will grow. A parent’s love is an amazing limitless thing. We can worry about how we will juggle 3 under 2, how we will tell family, what they will think, but at the end of the day we can be reassured that we will love this baby just as much as we love the girls. Baby #3 will slot in just as nicely as their siblings in the last 2 years.

So here we go again. Buckle up for 24 ish weeks of pregnancy updates, scans and prepping for baby #3! Each week I will be releasing a pregnancy update onto the blog as well as regular bump pictures onto my Instagram so make sure to follow us over there! Who said life could ever be boring?!? Life certainly likes to keep us on our toes and it is clear who had the last laugh for 2019!

WRITTEN BY AMY KINGSTON FOR HER BLOG, GROWING UP WITH NATURE.