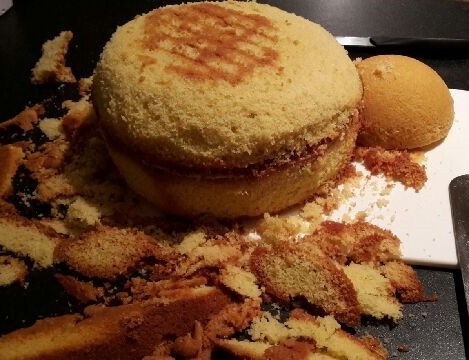 Bake Off? I Can Do That!

Before becoming a parent, I was fairly convinced that once I had my baby, not only would I become a veritable queen of crafts, but I would also make the instantaneous transition from incompetent cook to all round domestic goddess. Post birth and during our second week of dining on Doritos and grapes in the company of used muslin cloths and empty Twix wrappers, it became clear that this was not going to happen.  I’ll admit it, I felt wholly cheated. But I accepted it.

Then, almost a year later, without any warning and while watching The Great British Bake Off, I became convinced by some internal force that I, renowned burner of pasta and one-time corned beef omelette maker-extraordinaire, had baking skills on a par with a Bake Off finalist, if not, in fact, with Mary Berry herself.

Quite where this conviction came from, I do not know. I am no cook. I can just about make fairy cakes, and I was once so overcome with pride upon managing to make a Victoria Sponge that I cried. Despite this, as November approached, I knew that I had to begin thinking about making a cake for my little girl’s first birthday, and that the cake was going to be special.

This was not going to be a one tier cake with a smattering of icing and a few hundreds and thousands sprinkled on top. Oh no. This was going to be a show stopper piece. It was going to be an absolute marvel of a cake and why not?  People do it on Bake Off all the time, and I was a late blooming domestic goddess after all. How hard could it be? I was going to create a work of cake art, in the form of a bumble bee.

It goes without saying that the cake was going to be delicious. I would bake it in my newly purchased dome tins (which were quite pricey, but an artist needs her tools), ice it with artistic flair, and then display it on a cake board for all to admire. The bee would have wings, a little stinger, big eyes and cute antennae. And it was going to be a joy to make.

But here’s the thing. It turned out not to be a joy.

In fact, it was as far from a joy as undergoing root canal treatment while watching Topsy and Tim. If nothing else, I was grateful that it took only 4 attempts to reach an acceptable end result.

I vowed never to do it again.

So why oh why, after watching one episode of Bake Off, have I been revisited by the same internal force that stole both my time and my sanity back in October and November 2015? I’m already thinking about digging out the banished dome tins, and for a fleeting moment, even considered attempting to  create a scene from In the Night Garden in cake form. Am I mad? Quite possibly. But then people do it on Bake Off all the time. And I am a late blooming domestic goddess after all…..