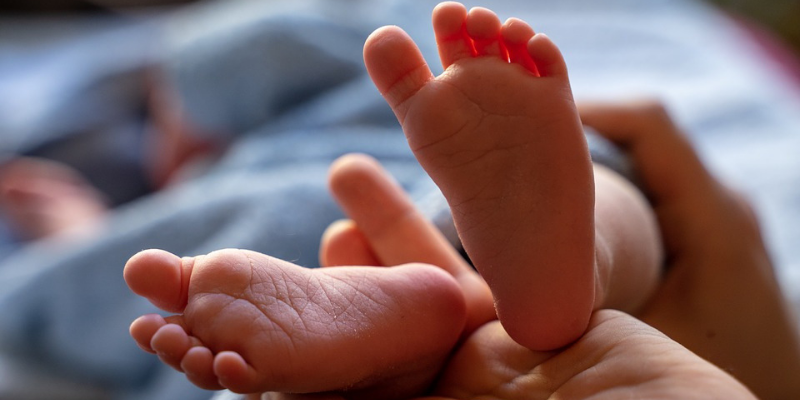 Once we got to Southmead, we were wheeled into a private delivery room in the maternity unit. Whilst the nurses checked Oscar over, I climbed onto the bed and just sort of sat there, still in shock from what had just happened. I was grateful the birth had lasted less than 5 hours but it all happened so quickly that I didn’t really get a chance to get my head round it!

I couldn’t believe I was now a mummy. That baby over there being poked and prodded was mine. Even with 9 months to get used to the idea, now he was actually here, it still felt so surreal.

Exhausted, both physically and mentally you would guess all I could think about was getting some rest but my adrenaline was still pumping and I wanted to tell everyone he was here.

It took Andy a while to get our bags together at Cossham and follow us back across town to Southmead, where we had been just 7 hours earlier. He later told me he has stopped at him mums for a toilet break (!) but I suppose he had gone my entire labour without one, or even a drink for that matter!

When he did arrive I was relieved to see him. A nurse came in and offered us tea and toast but I wasn’t hungry. I agreed to the tea but when it arrived, it may as well have just been hot water so I stuck to my Orangina instead. The fizzy tang was a godsend after hours of dry mouth thanks to the gas and air. Andy kept trying to feed me biscuits, grapes and sweets to give me some energy. It was so lovely how he wanted to look after us both.

We were told Oscar was ok now but his blood sugar levels were low and in new-borns can drop quickly so we needed to get them up or he’d be sent to NICU.

I tried to breastfeed him for the first time and was amazed when he latched right away. I don’t know if it was the adrenaline or extreme exhaustion masking the pain but I momentarily thought, wow that was easier than I thought it would be. Babies’ stomachs are so small he fed for a matter of minutes before the midwife handed him to Andy.

He was so tiny and screwed up. How did that just come out of me?! Oh yes, back to the second degree tear…

Whilst Oscar was having a nice cuddle, a doctor came in to examine the extent of the ‘damage’. She asked me to put my feet together, pull my heels close to me and drop my knees to the side so I was sat in a weird frog position. Uncomfortable to say the least.

She started by telling us she was at the very end of a 12 hour shift and that usually they prefer to stitch mums up sooner so the adrenaline acts as a natural pain killer. Great.

The examination hurt more than I expected it to. Really hurt. So much so, the tears came out again but this time Andy wasn’t even able to hold my hand for support. I just kept telling myself it will all be over soon then I can just enjoy my baby.

Once again, I found it almost impossible to stay still, even after the local anaesthetic was administered rather painfully with a needle (ouch!). Out came the stirrups. In was called a nurse to hold my hand. Out came the gas and air to help with the pain. I won’t go into too much detail here, you’ll just have to take my word that the pain was excruciating. One long stitch later and I was finally left in peace with the promise they’d be back shortly to check Oscar’s sugar levels again.

I decided to quickly take a shower to make myself feel vaguely human but first I had to do a wee in this cardboard hat. I guess they wanted to see how much I was passing and to check any blood. Either way, it didn’t sting to go, which I was nervous it would be. Andy helped me wash and get changed before climbing back onto the bed to finally take a minute to look at Oscar properly.

He smelt amazing and was so cute. I loved him instantly. After sending out a few texts, Andy and I exchanged looks – it was over and he was finally here. Relief. And with that, our little family was born.

After another heel prick test, Oscar’s blood sugars had dropped and hospital policy stated be had to take a sugar syrup, followed by a certain amount of formula to get them back up quickly. I really didn’t want him to. I felt like I hadn’t been given a proper chance to breastfeed him yet. I tried to put my foot down but ultimately settled on a sort-of compromise that he would have the syrup then I would try to express some colostrum and give that to him, then top up with formula. Ultimately I didn’t want anything bad to happen and know that something simple could have changed the outcome. He was so small and I just wanted him to be ok.

He barely took any of the formula and it was a weird relief, as if he would only be happy with my milk. On the downside, the midwife said she would have to test again shortly and if it hadn’t improved we would have to go through the whole thing again; heel prick, sugar syrup, formula. And again and again until he was stable. I kept trying to feed him so that wouldn’t be the case. Thankfully it worked and around midday we were moved to the ward, although we would have to stay in at least 24 hours to keep an eye on it.

The ward was hot and stuffy, not helped by the lack of an open window or fan and the fact everyone had their curtains pulled so there was no air circulation. The couple from Cossham were later wheeled into the cubicle next to ours. Small world. Turns out (from overhearing several phone calls) they had a big baby and ended up being transferred for an emergency c-section.

The next few hours passed in a strange blissful haze. The midwives were very helpful with breastfeeding advice and I quickly got used to having my nipples touched by complete strangers.

Soon, our mums both arrived to meet their new grandson. Granny Hindley brought micro nappies and tiny baby outfits. Never did I think I would have such a small baby so there was absolutely no preparation for that. 5lbs 2ozs. I was 9lbs 6ozs for crying out loud!

That first night was surreal. I was glad Andy could stay with us but the chair in our cubicle didn’t recline and the poor thing ended up sleeping on the cold floor, without even a blanket. I couldn’t really sleep, I just kept staring at Oscar. I could hear he was alive (the things that go through your mind when you’ve had a baby!) because he snored loudly. Bunged up with mucus he sounded like a little piglet. I loved it, so cute.

The next day was the hottest so far that year, or so it felt. Partners weren’t allowed breakfast in the communal room so whilst I ate some cornflakes, Andy sipped his coffee. Then, I sent him off to his friend’s house who lived nearby to eat, shower and rest.

Oscar’s one day check soon rolled around and I was relived to find the only concerns were potential minor tongue tie (turned out it wasn’t) and that one testicle hadn’t yet descended (it still hasn’t now at 12 weeks). No jaundice, plenty of fine, dark hair and a little red birth mark on the back of his neck. Practically perfect.

By this point I was so eager to go home. I took another shower, wheeling Oscar’s cot bed into the disabled bathroom to do so. This may be TMI but I successfully had a number 2 (not painful thankfully!) and I didn’t seem to be bleeding excessively. Maybe this wasn’t so bad. My tummy felt strange though and my centre of balance had certainly changed without my bump. I was sort of me again. But not me. A new me, where my sole purpose was to keep this little being fed, safe and happy.

After what seemed to be hours, we were finally given the green light to go home so I told Andy to come and get us – and bring the car seat.

In strolled the new daddy, car seat in hand, as well as the entire ISOFIX base! He hadn’t been able to work out how to remove the seat… I knew I had overlooked something in my preparation. A few ‘going home’ snaps taken, we were good to go.

Getting into our car and glancing into the backseat, we both took in the realisation that there was no professional help from here on in, we were on our own. I can’t describe the feeling of taking our son home that day and closing the front door behind us. It’s not like anything I’ve felt before but content, happy and in love will have to suffice.

Written by Daisy Pratt for her blog.