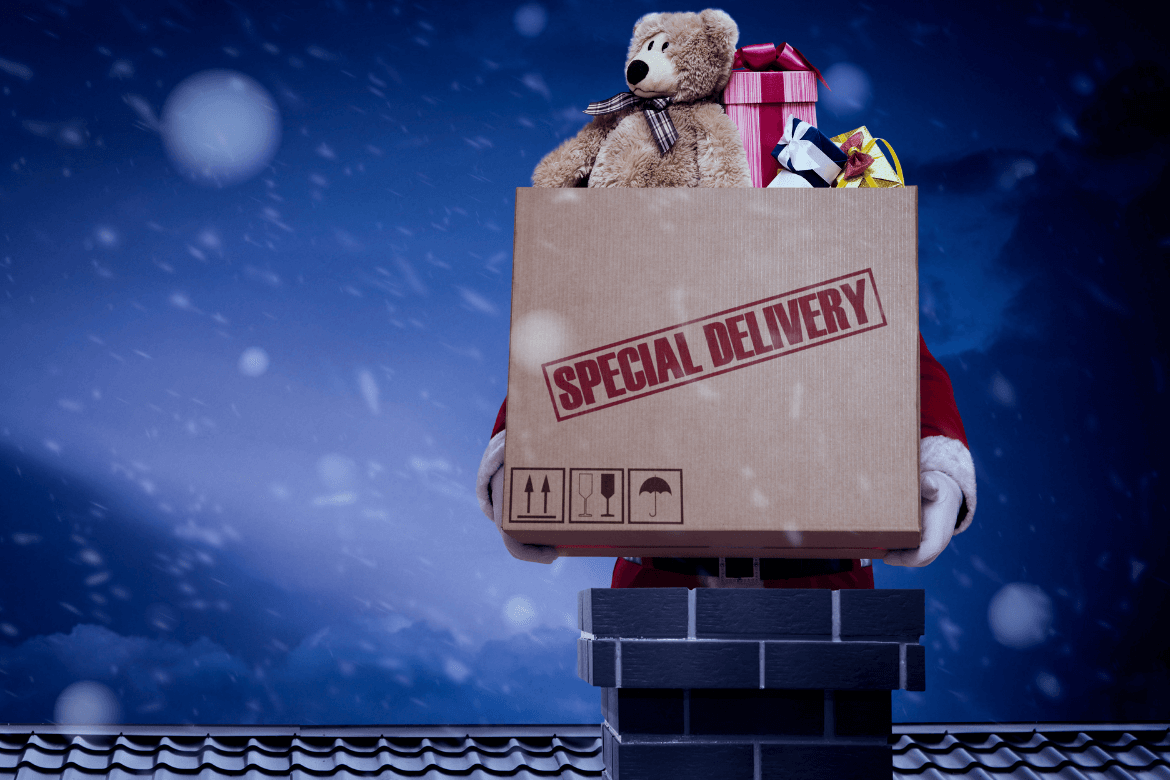 Christmas orders, the great escape and the Santa Claus

Well after last weeks parenting treat of little to no fights, everyone getting along and generally being happy and content, it was only a matter of time before a fresh batch of hell was waiting around the corner. Yup, Monday morning arrived and a new week began. And usually by Monday lunchtime, I pretty much know how the week is going to pan out.

It started off okay. Jamie and Lily got up, walked downstairs and both agreed they wanted porridge for breakfast. I made the porridge and let it cool while I made my first cup of coffee. I got the kids sat down at the table, served up the porridge and enjoyed the first (and usually only) point of peace and quiet in the day.

I sat down with my coffee..

“Mummy? Can I have some blueberries please?” Asks Lily.

I sat down again and raised the cup to my mouth when..

“Mummy? Can I have some orange juice please?” Asks Jamie.

And before I even get a chance to sit down again..

“Mummy? Can I get the Peppa Pig spoon please?

And before I know it, my coffee is stone cold. I’m hoping this is a common factor in every household with young kids. Piles of clean washing folded everywhere and half empty cups of cold coffee on every shelve and mantlepiece in the house.

And while I was in the middle of making my second cup of coffee of the day, the letterbox rattled and the post landed in the hall. Jamie and Lily dropped everything and then the usual race and scramble of who would get to grab the post first commenced. And cue the first fight of the day!

But no, nothing. I actually thought they must have knocked each other unconscious or something, as this was very strange. I peered around the corner and both of them were sitting in the hall floor with envelopes around them staring into a catalogue in silence. I walked over and lifted up the envelopes and glanced over at what had caught their attention and it was the M&S Christmas food book. I don’t think the toy catalogue held their attention for as long! If it were a toss up between toys and food with my two? Food! Always food! But great! This would buy me at least 20 minutes of getting jobs done.

And right enough, 20 minutes passed and apart from the odd gasp and “Oooooh look at that mummy!” there wasn’t a peep out of them. In fact, an hour later and they were still nosing through every page and then the pista resistance! The dessert section. Bingo! Another 20 minutes. In fact, the morning was taken up with oooooww and ahhhhing. Thank you M&S! I’m pretty sure that the makers of the food catalogue didn’t intend on their demographic being waist high and going to nursery but even Peppa Pig doesn’t hold their attention for this long!

The rest of the day was then spent playing Lego, Playdoh and nagging me on the odd occasion to rustle up a roast beef joint as a snack like out of the food book. Mmm as you do!

That evening after the initial disappointment that I served up fish fingers, beans and waffles for dinner rather than a turkey and ham with all the trimmings followed by profiteroles, they soon wolfed down their dinner and afterwards, decided to sit Daddy down on the sofa and show him all the delights in their new book!

The following morning, Lily woke up in bad form. She had slept through no problem but she was just in a bad mood and the terrible two’s strike again. After a morning spent of trying to win her round and keep them both busy to avert fights and melt downs, by lunchtime I was ready to have a melt down myself and decided to get them out of the house for a walk. It was absolutely chucking it down with rain but I figured if I was going to wait for a dry day to get the kids out, I’d be waiting a long time!

So, rain suits on, wellies on, hats on dressed for Niagara Falls! The walk was great and I just let them loose and jump and splash in as many muddy puddles as they wanted. They had a ball and loved every second of it. It wasn’t until we were almost back home and I stupidly began to think we had managed to win Lily round, when Lily realised where we were and didn’t want to go home. We had been out for over an hour and I was soaked, baltic and in need of a cup of tea so I wasn’t about to get into another debate with my two year old diva!

Before Jamie could even speak..

“Let’s go inside and we can have a snack and some juice?” I replied while trying to get the keys out my pocket with freezing cold hands.

I put the keys in the door, turn around and Jamie’s standing looking at me, no Lily.

I look over and Lily is frantically legging it passed the next door neighbours and away up the site as fast as she can go!

My heart sank into my stomach.

“Lily!! Come back here now!” I shouted. “Jamie go inside the house now.” While pushing him in through the door and sprinting up the pavement! The closer I got to Lily, the more I could hear her giggling, thinking this was all a big game! I grabbed her and carried her back to the house without saying a word while Lily was furious at having to go home. I got in the door and Jamie was sitting trying to get his wellies off and lily was just on the border of throwing herself on the floor about to go into full tantrum mode. But before she could even start, I knelt down beside her and grabbed her hands and said frantically, “Don’t you EVER run away from me like that again!

Lily was so shocked and the bottom lip started to go.

“Mummy’s very upset that you ran away from me.” I said while pretending to make my bottom lip go as well. I wanted to shock her and realise she had really upset me and I think it worked!

Lily looked up at me and put both hands on my face.

I actually could have cried. I don’t know if it was the scare, or the relief, or the cuteness overload from the little devil.

“Okay, let’s get all the wet clothes off and get a drink then.” I said.

After the kids settled down building a train track and my heart was beginning to return to normal with a cup of tea, I could hear the beginning of another ruckus.

“No Lily! That bit doesn’t go there! No! Leave it!  Noooooo!” Jamie shouts.

And the track falls off the table into bits. Jamie then pushes Lily. Lily then falls over. Lily then screams and grabs the food catalogue. Lily then tears a chunk of pages and launches the catalogue across the room.

“NOOOOOOOOOOO!!” Screams Jamie while picking up the devastation on the floor.

And Lily walks away.

An hour and a half of Jamie crying, some cello tape, glue, hugs and a promise to get another food catalogue later and Jamie was still utterly traumatised. Lily of course was delighted at herself for managing to get Jamie so wound up!

We eventually made it to bedtime and after getting Lily down, I got Jamie into his bed and sat down to read him a story.

“I want my food book Mummy.” He said starting to get upset again.

“Listen, you know that Santa is watching and he knows what desserts you picked.” I said trying to avoid another crying match.

“Don’t be silly Mummy, Santa is too busy sorted toys.” I got told like I was being stupid.

“Okay, well I know the ones that you wanted, so me and Daddy will get them then.” I said.

Then the crying stopped.

“You’re going to get them Mummy?” Jamie asked.

“Yes. Erm, you wanted the Christmas Colin The Caterpillar and the Reindeer Cake, didn’t you?”

“Yeah! And the snowflake and the chocolate ball and..”

“No you are only allowed up to two desserts because then there won’t be enough for everyone then.” I said thinking on my feet as I wasn’t about to spend £300 on desserts!

“Ok Mummy! Night night!” and he rolled over and snuggled down into the covers.

See? That’s the Santa ‘Claus’. He sorts the toys while all us mummies and daddies have to do is sort the food. Easy right?!