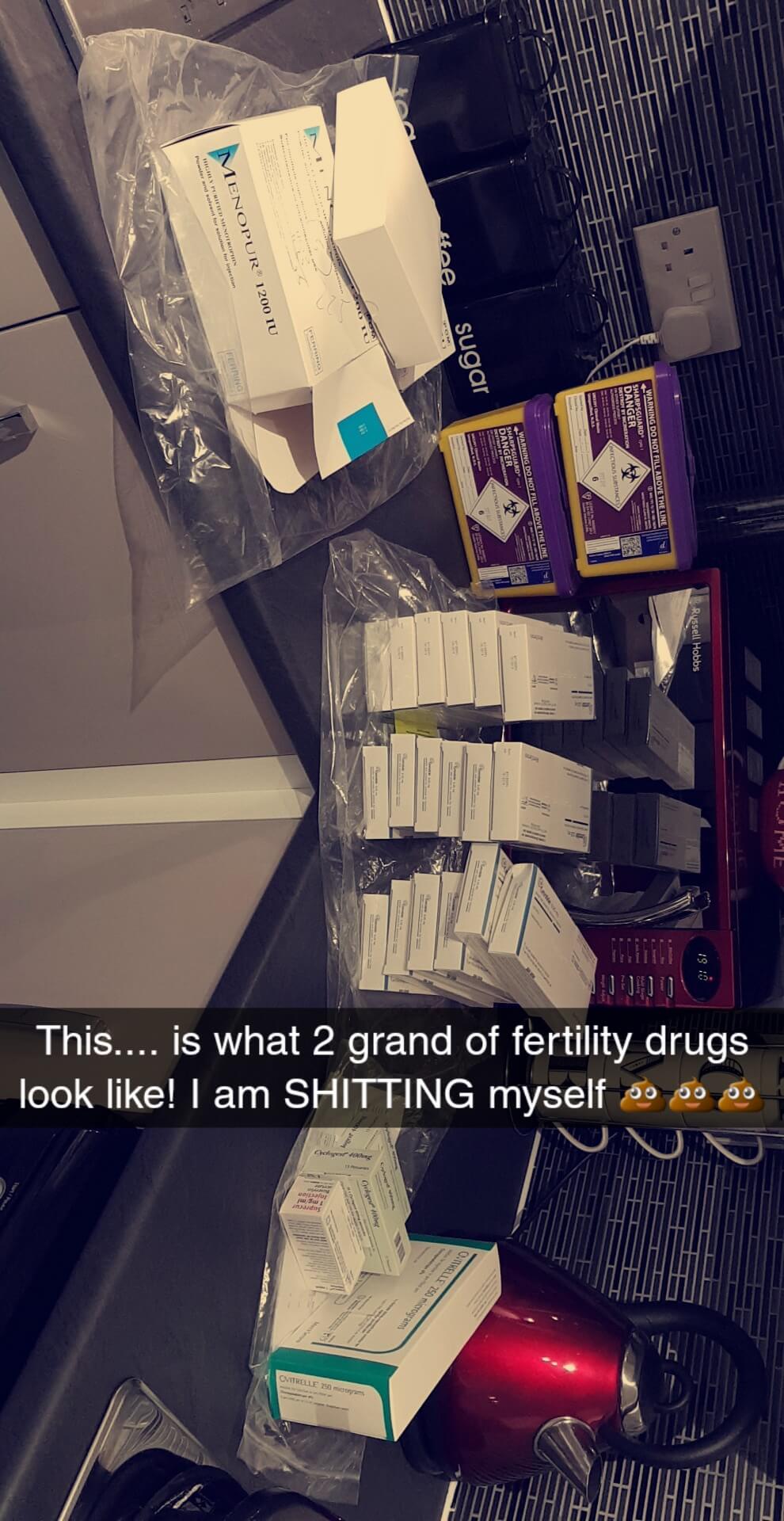 In 2018, we went through a absolute insane few months during our IVF treatment.

Looking back, I’ve realised that no one really talks about fertility issues and I guess like us, it’s mostly a very personal battle. Maybe there’s even an element of shame and fear as well. We had lots of support form friends and family every step of the way, but after finding some pics from our time going through it, I thought it be opportunity to share. Hopefully more people can understand that the journey to parenthood can be so different for lots of people!

After 8 years of no success on our own, and been given the bump by NHS with a diagnosis of “unexplained infertility”, we reached out to a private clinic. We started around June where all the prep work was done. Scans, bloods, testing, paperwork (SO MUCH paperwork), more bloods and more scans.

We were finally ready and from August, I started on a whole whack of drugs to kick start the old ovaries. Side effects weren’t so bad but nothing more daunting than having to administer your own injections. For a while I could NOT convince myself to deliberately hurt myself and it took me an extra hour before work every morning to give myself a pep talk.

Timing was massive and trying to fit a bit of social life around making sure you took injections on time was no easy task. Nothing makes you more paranoid than shooting up some oestrogen whilst in a pub toilet!!

We were in one of those typical situations where the man gets a wee cup and a private room; whilst the woman gets all the fun bits. Modesty goes right out the window when your doctors have seen more of your vag than you have! Nonetheless, I had someone pretty amazing to hold my hand the whole way not to mention a fantastic clinic who’s levels of empathy and care were second to none.

By the end of August, we went for step 1: egg collection. Now, my biggest fear in this world is being put to sleep along with surgical environments. I physically rattled my way through it and woke up after few hours to news we’d collected 22 eggs. We went home, me walking like I’d spent 3 days horseback, and got a call that evening to tell us 14 were viable.

Out of those 14, 10 were fertilised. Out of those, 7 were suitable for freezing.

MORE injections followed. By this point, you’re a pro. This went on for another week or so to prep for transfer. We went back and forth for bloods and scans, until finally it was transfer day, 29 October 2018. We were called when our little embryos were thawed and again timing was crucial. Sadly, one wee embryo wasn’t fit to come out of the arctic but 2 others made it just fine.

So, back into surgery we went. We watched on screen as 2 little spirits were fired back into their hopeful home. What isn’t talked about is that when the transfer happens, you can literally see a flash of white light on the internal scan as those little guys are put back. It’s pretty magical.

We choose to transfer 2 eggs, despite the recommendation from our clinic to be conservative, along with additional risks of twins, because it felt right. It’s important to note that transferring more than 1 egg does not necessarily increase chance of success. Same goes for the rating of embryos – usually rated A, B or C if considered viable. As my doctor explained, you could be buying a car and have 2 to choose from, one could be a bit beat up visually but a perfect runner under the hood. One could look brand new but have hidden faults. For us, we decided to go with both cars since we had been lucky with a healthy collection!

Step 3: the 2 week wait. OMG there’s nothing more torturous not being allowed to know if something you’ve dreamed about for YEARS has worked or not, for 14 whole days. I gave in!
I took a test from the 9th day. It was negative and I made myself sick over it but was told it was probably too early and to stay calm. Yeah…. Right!

We were back for…you guessed it… MORE BLOODS AND SCANS. And then waited on a phone call.

Now, there is NO GREATER JOY in this whole world than to be told, you’re finally pregnant with a little soon-to-be bubba that you’ve wanted like nothing else in this world. It soaks up every fibre of your being and leaves you completed ecstatic.

We had 7 nervous weeks with our 1 surviving embryo comfortably growing away. It was such a nervous time and we spent it not knowing what to think.

Heartbreakingly, this story didn’t have the happy ending we desperately wanted and it just wasn’t meant to be. I bled heavily while at work and rushed to hospital. Despite our clinic telling us there was a faint heartbeat, I knew deep down this wasn’t going to be our time. That heartbeat stopped on 4 December 2018, and as little as that baby was, she was always my first! To remember that tiny soul, we placed a plaque in a special place to mark our journey.

We were completely crushed when the miscarriage happened but from such a harsh negative, we took so much comfort in the fact that it HAD happened. This made the healing process so much more manageable. We were assured that statistics show those who fall pregnant, but miscarry, do have stronger chances in the next cycle than those who don’t fall pregnant at all. Despite our grief, we were so thankful for that much at least.

So that’s were the IVF journey halted for us after a miracle happened all on it’s own, come February 2019. Were I sat on the couch a year ago today in pieces, feeling like I was a complete failure and had let down my husband and family, I now sit here cradling my little man; knowing how precious he is but still not quite believing that we could ever be this lucky!

It also made us wholly appreciate that not everyone has it easy. Some are not so lucky to be able to even consider IVF and some may go through it for years only to experience failure after failure. Not only that but there are so many people who for lots of reasons, the possibility of  parenthood is not possible for them through no choice of their own. Its these people that my heart pours out to. These are some of the most maternal people with unfulfilled dreams, its gut wrenching.

The whole fertility issue comes with A LOT of judgement. The ignorance from those who think “there’s worse things in the world”, “population is already too big” or my personal favourite… “you should be adopting then”.

You can never point those words at anyone facing infertility not only because they’re fighting their own shame and feeling or failure, but also because that basic human instinct to procreate (as basic as breathing for some), is so strong that perhaps adoption is out of the question. Who’s to say that process is any easier anyway! Orphaned children are not the default responsibility of infertile couples, but my deepest respects to those who choose this for themselves.
Infertility comes coupled with lasting mental health issues and should always be treated with sensitivity and compassion above any sort of judgement or assumption.
Throughout our time TTC, I’ve found myself developing extreme anxiety as a result of feeling out of control. Despite the stresses of parenthood, this anxiety has lessened since having my son but I’m aware it’s something under the surface that I might always carry. My worst fear, that sparked the onslaught of panic attacks, was those “so when you going to start trying” questions. Its opened my eyes entirely on the simple GIFT of reproduction and the tenacity of those people who fight for their chance to be a mum or dad. It’s no easy feat for everyone, but truly deserved to those people who try the hardest.
Written by Emma Ritchie.
Tags