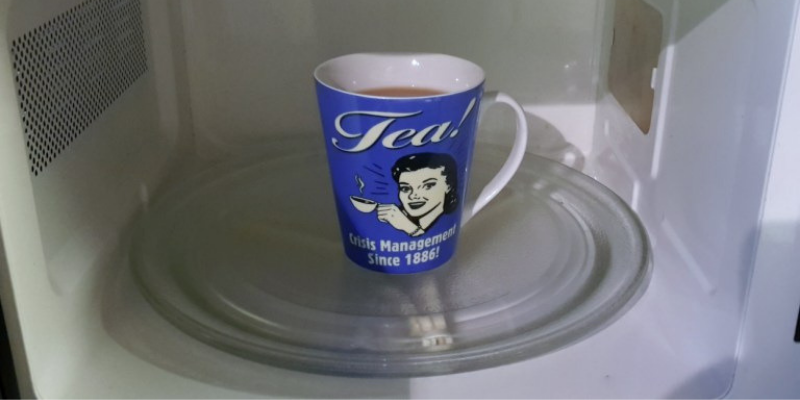 For The Love of Tea

I love tea. I’ve always loved tea. I love tea so much that when I left my last job, they bought me a teapot and tea bags (which I’m sure is because of my well-known fondness for tea, and not some sarcastic dig about how long I spent chatting in the kitchen).

The thing is, nowadays, I don’t get to drink much tea at all, and it’s not for the want of trying. I actually almost gave up daytime tea drinking a few months ago, until, out of sheer desperation and a blatant disregard for the health of my internal organs, I discovered the Art of Microwaved Tea.

Before I try to convince you why you should also consider embracing the Art of Microwaved Tea, let me just explain the tea cup travesties which led me to this point.

While ‘floating tea bag’ may sound like some kind of mystical zen-like yoga move, it is in fact anything but.  For a person charged with the care of a toddler, nothing symbolises the abject futility of making a cup of tea quite as well as the floating tea bag. If you don’t have time to remove the tea bag, you don’t have time to drink the tea. End of.

The floating tea bag can typically be attributed to one of the following:

The floating tea bag will create a stewed, industrial-strength lukewarm treacle-like beverage.  Aware of the pointlessness of attempting to make a further fresh cup of tea, many will proceed to imbibe the now vile liquid, sip by sip and wince by wince, because, at least it’s tea. Sort of.

And secondly, this one: The full cup (of false promise)

A lucky few embarking on the tea-making process will manage the whole shebang.  Tea bag out, milk in, the whole lot.  These oblivious fools will admire their work and look forward to their first sip. They are basking in the mistaken belief that this full cup of hot, caffeinated loveliness will be consumed in its entirety.  Initially, they do not even entertain the possibility that it will be a complete waste of water, milk and a tea bag.

However, as early as 30 seconds after adding the milk, when it becomes more than apparent that today was not the day to introduce a different breakfast cereal to their highly strung toddler, who is now three quarters of the way through a successful Houdini-like escape from his highchair, the same people will curse themselves for being very silly indeed.

This abandoned cup of tea will stand alone in front of the kettle for the remainder of the morning, a stark, miserable reminder of what might have been. In three hours it will be poured down the sink and the futile act of tea making will begin again.

Sound familiar? Please do not despair. I was in the same predicament until a few months ago, when suddenly, this began to happen:

I am now an avid follower of the Art of Microwaved Tea. Eventually, even the most determined tea-loving toddler parents will reach this point.  It just takes some longer than others to get there. A willingness to microwave your tea signals an acceptance that fresh tea is no longer something which is within your grasp, at least not during daylight hours. I don’t think it’s too unreasonable or dramatic to call this acceptance ‘Enlightenment’.

The Enlightened will make a cup of tea, fully aware that they won’t be drinking it any time soon. Typically, once made, it will remain on the kitchen bench for at least one hour, while they busy themselves with removing fragments of crayon or sticker from their toddler’s mouth, retrieving their toddler from the window sill or wiping an emulsified Ritz cracker from their sofa.

The Enlightened do not feel disappointment when they realise that their cup of tea is now cold and undrinkable. They simply pop it into the microwave for a few seconds, et voilà: a hot cup of tea.

It may be the case that having heated it up, they take just one sip before again leaving their cup of tea on the side to pick up the entire contents of their Tupperware drawer from the kitchen floor (again), to extract their toddler from beneath their dining room table in response to frantic screams of ‘stuck’, or to Google ‘how many crayons can a toddler safely eat?’ (just in case).

The tea will go cold again, but do they worry? Of course not! They simply microwave it for a second time and enjoy a further sip, before the next inevitable crisis occurs. They repeat this pattern for the rest of the day (or until they become ill).

The benefits to following the Art of Microwaved Tea are endless. For example:

What’s not to love? Join the Enlightened ones and start microwaving today! I guarantee you’ll never look back!*

*Unless you get really sick, then you may regret it. But for the love of tea, it’s worth the risk. Probably.