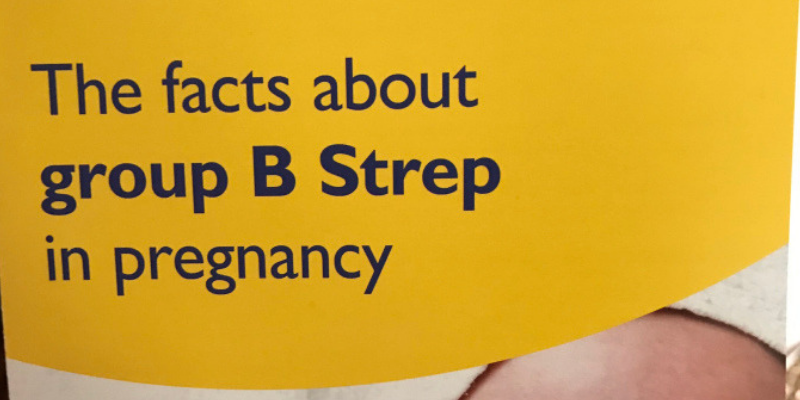 Group B Strep - What?

This week is Group B Strep awareness week and I’m sharing my experience of Group B strep and how this impacted my pregnancy, labour and daughter.

Group B streptococcal (GBS)is, apart from being a complicated medical term, a harmless bacteria which is found in the gut and the vagina. According to the NHS it is a very common bacteria and up to 2 in 5 people are carriers of the bacteria with no adverse effects. However, group B strep can be extremely harmful in pregnancy and if the newborn contracts the bacteria during labour this can be potentially fatal. For more information you can visit the NHS website here. The Group B Strep Support site (GBSS) also contains a vast amount of information and additional support. You can also order a GBS testing kit from them here online. The NHS in England do not routinely test for Group B strep in pregnant women despite it being so common and the severe risks to the newborn. I was extremely lucky that I was tested at 35 weeks pregnant but for different reasons.

When I was 35 weeks pregnant I had gone to lunch with some friends. I was very full at this point with my daughters head engaged in my pelvis and her bum under my ribs. I was suffering from a lot of pressure in my pelvis and the fact that I could no longer put my shoes on made me cry everyday.

Off I waddled to lunch and in the pregnant lady style I needed the loo as soon as I got there. I had heard of a mucus plug ( or a bloody show) and knew that if I lost this then that was a sign of labour but I agonised over how I would know and what it looked like. Well when I went to the toilet there was something in my knickers that hadn’t been there before and which I had never seen before. It looked very much like all the descriptions I had read of what a bloody show looked like but every pregnancy and labour is different so you can never be too sure. I took a picture (I know gross but it becomes important later) and rang my local maternity assessment unit (MAU) who advised me to go in and be checked.

No lunch and a mate date missed, off I went to the MAU. They completed the routine checks and monitored my babies heartbeat. After completing an internal examination the informed me that my cervix was not dialated and therefore what I found could not be my mucus plug. This is where the picture comes in. I showed it to the midwife and they said that it did look like a show but they weren’t entirely sure what it was. ( Great tip for any pregnant lady if in doubt take a picture)` It was at this point they informed me that they had taken swabs and would run some tests with the view to contacting me only if something came up. There was no mention at this point they would be testing for GBS, in fact there was no mention of what they would be testing for. I didn’t think anything further of it until I got a phone call a few days later.

The midwife explained the results had returned positive for GBS and I would need to come in and collect some paperwork for my maternity file and an information booklet. I had never heard of GBS before. Apparently the NHS in England will only test a pregnant woman for GBS IF they are testing for something else. When I arrived at the maternity assessment unit, they gave me the paperwork and information and stuck several bright yellow stickers all over my file which notified all who saw it that I was GBS positive. Was it that bad? Was it something I should be concerned about? The midwife explained not, that it was very common and meant that I would need IV antibiotics when my waters broke.

It was only when I attended a planned growth scan the following day that I was informed of the risks involved with GBS. The importance of ensuring that I came into hospital as soon as my waters broke in order to ensure I received the IV antibiotics to ensure they had sufficient time to cross the placenta and provide the required protection to my daughter through delivery and the period after, was highlighted. I was also informed it was very important that I made sure whoever was leading my care when I went into labour that they were informed of my GBS status. And that was it, nothing more nothing less. Still grieving for my Mum, I didn’t fully understand the severity of the situation should my daughter contract this bacteria from during labour and it is only now , after reading some horrendous stories of how some babies have lost their lives, that I realise how incredibly lucky I was not only to have been tested but that I did receive the antibiotics in time for my labour (only just).

When I was in labour they were unable to track her heartbeat with the stomach trace. As a result they had to attach what my husband described as an antenna ( which made me think that it looked like I was giving birth to a teletubby) and ultimately this caused an open wound on her head. An open wound in the presence of bacteria is not good. As a result of this she was administered IV antibiotics every 12 hours for 48 hours in total and thankfully she was fine. If we hadn’t have known I was GBS positive and this procedure was something they had to perform regardless in my delivery ,then the risk to my daughter with an open wound on her head was massive, it doesn’t dare thinking about. My daughters risk was increased further as she was born at 36 weeks and babies born before 37 weeks are at a higher risk of contracting the bacteria.The fact that we did know and therefore she was able to receive treatment as a preventative measure is fortunate for us.

I do not understand why the NHS in England do not routinely test for GBS, especially when it can prevent newborn babies from contracting a potentially fatal bacteria. You can choose to purchase a test online but why should this be the case? If GBS is as common as they claim then surely it makes more sense to test and prevent than wait and treat.

For anyone who has been informed they are GBS positive ,or for those who want to know more, visit the GBS support website. My GBS story is very common in that we experienced no adverse effects and my daughter was completely healthy. Not all GBS stories end this way and it is because of this that testing should be offered to ALL pregnant women regardless.