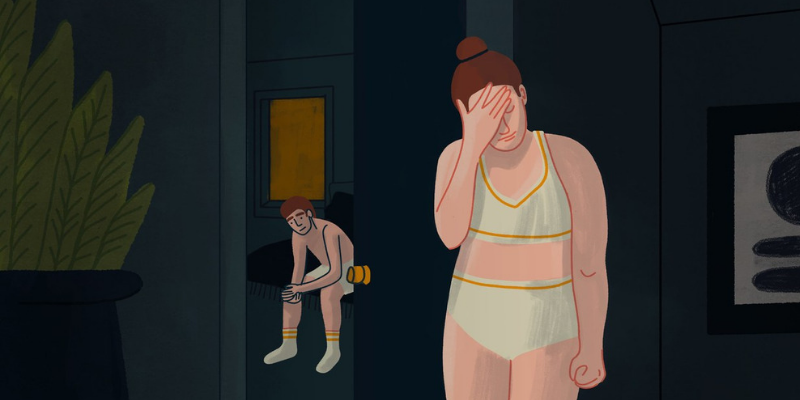 Labour PTSD - From Sex Lover To The Ultimate Prude

I loved it all and I wasn’t scared to talk about it nor would I ever take precautions to hide away the contents of ‘that drawer’. The drawer in question was often a struggle to get shut, overflowing with all sorts of magical lubes, oils and an assortment of wacky shaped toys.

In fact, sex is something I loved that much that I even applied for my previous job which I have been in and out of over the course of a good few years- working at Ann Summers. I can’t explain how much satisfaction I got for being paid to talk about all things on the naughty side whilst actually making a difference to people’s love lives.

And sex is, of course, what ultimately led me to having a baby which is pretty much nature’s aim when it comes to fitting the two pieces together and doing the dance.

Never in a million years would I have expected giving birth would have affected my libido the way it has.

The decrease in my sexual appetite had reached such catastrophic proportions that I actually found myself panic googling ‘just had baby will I ever have sex again’ along with things like ‘will my vagina ever feel normal’ and ‘has my babies head destroyed my sex life forever’.

I remember in the weeks leading up to my due date, I wanted sex constantly even though we could only have it if I lay like a beached whale propped up in my pregnancy cushion.

Carl, on the other hand, was completely put off in the last few days at the thought of his penis being in such close proximity to our Son’s head particularly when we got the news that the head in question was substantially engaged.

One night I actually said to him

“What will you do if I give birth and just completely go off sex?”

“When pigs can fly Ashleigh”

And we both laughed dismissively into the darkness.

The thing is, in the first few weeks I was particularly in the mood even whilst adjusting to the chronic lethargy and lack of sleep. We actually had very pleasant sex a few times in this period and then, out of the blue, my interest in it just diminished.

Kaiber’s head safely out of the way of his male anatomy, Carl’s sexual appetite came flooding back and he would have had it every time baby slept if possible.

He was fantastic at making me feel good about myself in all my postpartum, deflated stomach and dry shampooed glory too. Compliments and butt slaps galore leading me to feel obliged to jump into bed with him every time he initiated anything.

The first issue was the fact that I categorically, one hundred percent do not want to fall pregnant again so soon. I am determined that I want to enjoy having only Kaiber until he is at least three years old.

A Condom, pill and the good old pull out still wasn’t enough to turn off my during-sex thoughts.

‘I am so fertile right now’

‘Is that condom on properly?’

‘Shall we go double rubber?’

‘What if it splits’

‘Has the pill even kicked in?’

Not really a turn on!

Then there were the physical issues.

I’d lie there feeling sick and squeamish, increasingly aware of my episiotomy scar releasing phantom pains I couldn’t brush off, the scar I hadn’t braved looking at or touching yet.

I was suddenly vividly aware of all of the changes happening in my body and over thought it so much that I could feel every little one of those changes.

The sudden empty tummy that had been round and stretched for so long, the uterus shrinking, the milk continuing to come in.

The days went on and I was feeling worse and worse. The mere thought of him or myself for that matter having hands anywhere near down there made the blood rush from my head.

I was feeling faint when contemplating starting my pelvic floors and the jiggle (or toning) balls I had talked about, advised and sold to so many woman at work absolutely petrified me.

I would find myself reliving my labour in a hazy day dream and it would bring about panic attacks which were something I hadn’t experienced for the best part of a year.

Then there were the nightmares which were basically the same thing- a run through of my labour, waking me up in the most horrendous night sweats I had ever experienced.

The strange thing is, I didn’t actually find my labour that traumatising at the time (the contractions aside) especially when I compared it to horror stories from other woman so I was completely shocked to have had such a delayed reaction to it.

I brought it up with my doctor and she said I had minor labour PTSD, would you believe?!

Carl had said in passing that he thought I did but I really just did not know it was a thing. I thought it only applied to people who had been through major trauma and I said as much to them both.

Then I sat back and thought about it, realising that birthing a small human from your vagina is most definitely just that.

This was a bit of a turning point for me.

I’d been so embarrassed and actually ashamed for being terrified of sex due mainly to the fact, I think, that I was so open and enthusiastic about it before now.

It started to sink in that my body has changed dramatically as have I as a person and these changes take some adapting to.

I decided to have a good sit down chat with Carl about how I had been feeling and the way even thinking about sex made me sweat (but not in a good way) and he was so understanding but to be honest, I shouldn’t have expected anything less.

We decided to wait until I am ready so that I don’t feel under pressure and, although I am still struggling with the symptoms, the phantom pains and nightmares, I feel so much better.

Carl, bless his heart, has cooled down the touchy-feely vibes even if he sometimes cheekily grabs my bum but I’m okay with that.

It’s an alright bum after all!

It’s normal to not want sex in the months following labour. There is NOTHING to be ashamed about ladies. Our bodies have just brought life into the world and that is amazing. Take time to recover and most importantly talk talk talk to your partner, I can’t stress that enough.

Written by Ashleigh for her blog, The Mammy Diaries.

About Ashleigh Wood
A First-Hand View of Honest Motherhood through the eyes of a First Time Mammy. Documenting the highs, lows and all the in-between of this journey for anyone who is, has been or is going to be in the same boat and for anyone else who wants to come along.