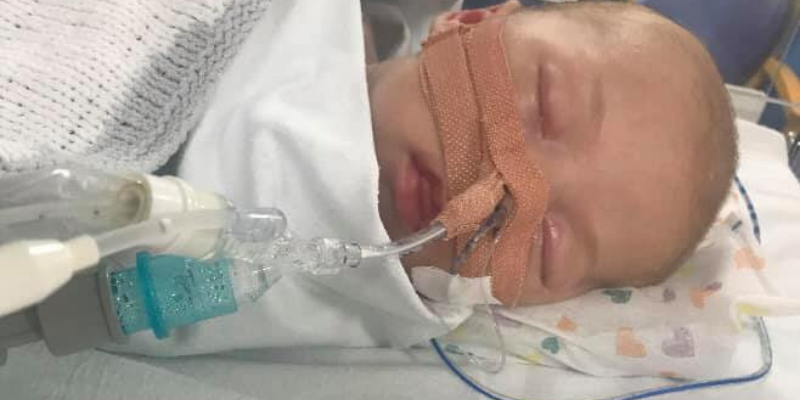 After much thought, I’ve decided to share some of Oscars story to raise awareness of the importance of knowing the signs and symptoms of Sepsis and Meningitis, and why babies should NEVER be kissed. If this post helps just one baby, then to me, it’s worth it.

He was taken to Resuscitation at Kettering General Hospital and within 20 minutes of arriving, had bloods taken, cannulas inserted, oxygen administered and was hooked up to 4 antibiotics and an antiviral medication.

Oscar was in Septic Shock.

Twice a minute, he would stop breathing, and the team would have to startle him to begin again. This went on for two hours, until he was put into an induced coma, intubated, and two paramedics and three specialists, from the critical care transport team, blue lighted him 104 miles away from home, to Royal Stoke University Hospital.

Oscar spent a week in Intensive Care; three of those days, completely unconscious and unable to breathe for himself.

Whilst in Stoke we could do nothing but sit and stare at our baby, unable to hold him, whilst test upon test, and countless medications were administered into his tiny body. We waited to hear if the Sepsis had been caught in time, or if it had started to shut down his organs… we were one of the lucky ones.

Six days and numerous suspected conditions later, Parechovirus Meningitis was confirmed. This had caused Encephalitis and Sepsis. There is no medication for this type of Meningitis.

Fast forward, and Oscar is now doing brilliantly, achieving everything we would expect of a 10 week old, but he still has a journey ahead of him.

The most common side effects of this type of Meningitis are hearing loss, Cerebral palsy and global developmental delays. None of which, we will know until he starts to grow and begins reaching/missing milestones.

This form of Meningitis is caught through direct contact with nasal secretions or saliva; KISSES, COUGHS and SNEEZES! The virus has little, to no affect on anyone over three months of age, and can live unknowingly in any one of us. However, under the age of three months it is critical.

Oscar had NO RASH, and NO TEMPERATURE.

Oscars symptoms that night were noisy breathing, paleness, and difficulty to wake.

There are a number of different symptoms that can occur with Meningitis and Sepsis, and I urge you to familiarise yourself with them, and to never ever second guess yourself if your instinct is to seek medical help.

The parting sentence from Oscars consultant in ICU will never leave me; ‘Kettering getting the medicine in to him as quick as they did, meant we could investigate the problem whilst he was still here, and not with a post mortem’.

Please educate yourselves and others around you to help eliminate the chances of this happening to any more babies.