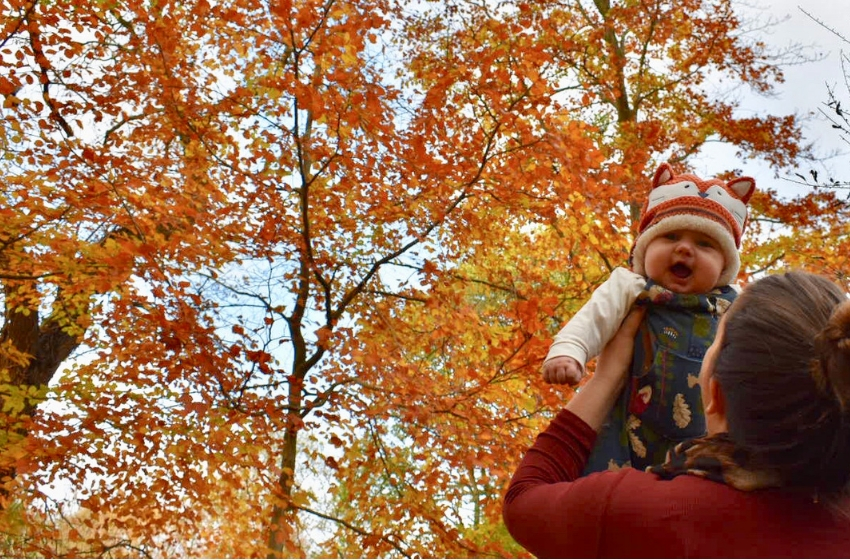 You’ve heard of the 5 stages of grief, right? Well, coming to terms with the end of my husband’s Paternity Leave seemed to me to be uncannily similar.

Of course, I was thankful that we had spent the most glorious first few weeks together as a family. Learning on the job as we went and discovering the highs and the lows of parenthood firsthand, together.

But those first weeks went by in a sleep deprived blur. Before we knew it, the day came for him to return to work, kissing us both goodbye as he left, I gulped back the tears. I was sad that the time had gone so quick and wished we could do it all again.

After the sadness of him leaving us sank in, next came the sharp sting of jealousy.

“Errr. Hang on a sec’” I pondered to myself. Off he trots to drink gallons of coffee at his desk all day – whilst I spend my day held captive on the sofa with a guzzling milk monster permanently attached to either one of my boobs, changing poop explosions to rival eruptions from Mount Vesuvius and most importantly doing anything and everything to make sure our son was happy and safe. ALL ALONE.

The stark realisation felt like it punched me in the face, that this is it now for me. This is my new life.

I was envious at the thought of him getting to have a leisurely shower every morning, and eat his breakfast in absolute solitude.

Whereas, I would be lucky to have a ten second dunk under the water and a bite of cold toast (washed down with an equally cold cuppa) accompanied by the dulcet tones of a wailing baby.

“Looks like I’m destined to be unkempt and survive off hobnobs for the foreseeable future….” Fuckity, fuck, fuckkkkkkk. “How is this even fair?!” I thought.

Next, came the overwhelming feeling of terror…

I was ever so slightly terrified at the daunting prospect of parenting solo. My anxiety slowly trickled in and I had racing thoughts filled with fear and dread. Crazily, I wondered what would happen to our baby if God-forbid something awful happened to me while he’s in my care…

Erm “WOAH, what if I collapse or fall down the stairs, or something?!” I hurriedly texted to my other half.

These thoughts soon subsided after a few reassuring replies from my husband. He said if I didn’t respond to his texts within 15 minutes he would send help.

For me – this was the moment when everything just sort of made sense.

After voicing every possible concern I had with the situation – I realised that this is my new job now – being a mum.

Those initial feelings of sadness, jealousy and overwhelming anxiety all faded away and were in fact replaced by a sense of smugness.

Of course, there’s no question that parenting is BEYOND bloody difficult. But in all honestly, it’s absolutely the most rewarding and special task I’ve ever had to do.

In actual fact, it turned out my husband was envious of me too.

He was jealous that I get to spend my days on maternity leave closely watching over our little boy, nurturing him, protecting him and helping him grow to become the best little human he can be.

It’s me who’s there to see him reach his new milestones first. I’m the one who is there for him first thing on a morning when he’s cooing to himself as he wakes up. It’s me who’s there for him last thing at night. When he’s hungry it’s me who provides his milk. I am the one who puts him down for his naps during the day. Me, who tries everything she can to entertain him. Little ol’ me, who takes him along to Baby Sensory classes every week (even if I’m late the majority of the time and have to slap on my make-up using the rear view mirror). Yep it’s me, me, me – who pretty much just lives and breathes our baby.

Sure, there are difficult days when I feel like I spend my whole life clock watching. Literally counting down the hours until my husband’s return… When the sound of his car pulling onto our driveway fills me with absolute joy. FINALLY – There’s hope that I can have at least half an hour to myself.

But there are also the days which are absolutely blissful. Where I feel a little sense of smugness that I get to spend my days at home with my baby son… Those days where we are having a morning walk together whilst everyone else is stuck in rush hour traffic. Or even those extremely rare days he lets us both have a lie in until 10am. And not forgetting those days where he cluster feeds and I get to binge watch whatever trash I want on tv.

I’m so grateful for maternity leave and to be a Mummy – I know that when my time comes to return to work I’ll look back on these days as the best of my life.

About Kloe Forster
I'm a first time mum - relying on copious amounts of tea, chocolate and a whole lot of Googling to get through parenthood...