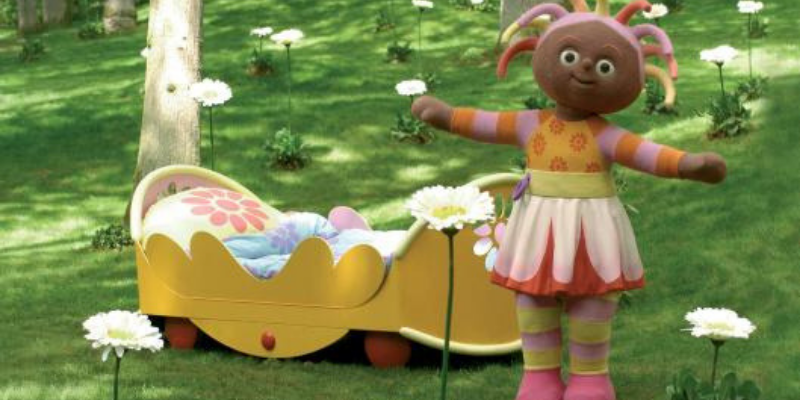 The Murder of Upsy Daisy

So your kid loves to throw their toys around. But it’s fun and games no more when it ends in a river.

Going away is always good. It would be a lie to say it’s not stressful and doesn’t involve an ill-equipped Virgin train, and endless torrent of steps and at least two meltdowns. But it’s worth it.

Things are going so well, and you’ve even waltzed away with a National Trust membership because well, you’re a mature and educated citizen now. Or so you tell yourself. it’s nice to finally be outside in a green space not convoluted with grey. We do some walking, take some photos- everything is chill. That is, until we encounter a bridge with a river flowing underneath. There’s nothing wrong with the river, just the crime that’s about to take place init.

I’m about to take a cute photo of my daughter holding her favourite Upsy Daisy toy looking over the river, but before I even get the chance poor Upsy Daisy has become victim to a homicide. She is lying face down in the river.

The murderer has finally realised the consequence of her action and is looking at me and her Dad as if we were the ones who catapulted the In The Night Garden resident into the water. She is now screaming at us and people are looking. “She did it” we reassure them. I’m sure my father would agree that this was payback for doing the same thing to his favourite specs 23 odd years ago.

There is nothing we can do. A few people told us we could always fish her out if we borrowed a rake (how?) But I’d rather not take home an Upsy Daisy with Weil’s disease. All that’s left for us to do is to call on the trusty Roman god that is Argos. We will just pretend that Upsy Daisy has gone shopping. Arielle will soon forget about her. Wrong.

We hit up Argos in the town centre and we have just got Arielle to calm down. The kind lady at Click and Collect goes round the back and presents me with Iggle Piggle. This can’t be right I think to myself. But there are no Upsy Daisies left. We give in and pass the imposter to our daughter who can see through the BS. She squints at the blue monster as if to say “you’re not making a mug of me” but accepts it as a side piece to her already frivolous collection. Oh dear. I am now 10 pounds down which wouldn’t matter so much if I wasn’t always a tenner down.

It’s now 10.00pm and we have only just managed to get Arielle to bed. We are exhausted. As if by the workings of a guardian angel, my phone lights up to tell me that there’s an Upsy Daisy waiting for us. Thanks Mum.

Written by Bryony Bathie for her blog, Mini Mummy.