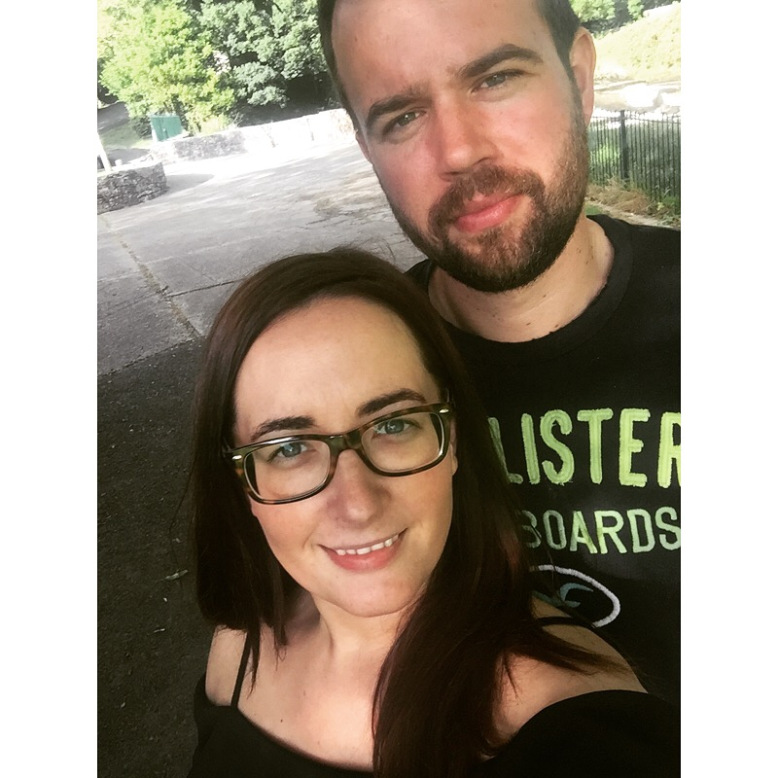 The Start of Our IVF Journey

This is me, my name is Sarah. And beside me is my wonderful hubby Darrell, who is always by my side through every little step of the way- even though at times I’m sure he feels like killing me.

We got married in May 2014, after being together for 7 years, and in January 2015 we decided to start trying for a baby. To our amazement, we got pregnant straight away, on the very first time trying. But unfortunately our joy was short lived, and we miscarriaged at 10 weeks. It was a horrendous time for us both, and our surgeon said it was one of the worst miscarriages he had even seen. I had two huge losses and in very public places, which was horrible, but when you’re going through losing a baby, you don’t care about anything else.

Little did we know that was only the beginning. After the miscarriage I caught a few infections and ended up being diagnosed with Strep B. What followed next was excruciating pain and abnormally heavy bleeding every single month with ‘AF’ and also intense ovulation pains to the point of having to go to hospital.

11th July 2016 saw the first of my operations to date. I had a laparoscopy, my fallopian tubes blew, a D&C and also an ovarian cystectomy. The pain afterwards for the next five days was unbearable. I couldn’t sleep, I couldn’t lie down, I had to sit up completely straight, and eventually I started to feel ‘normal’ again. When I had my operation my consultation told me that due to the infection I had after my D&C at miscarriage, by body was basically a mess, and full of adhesions. The operation took a lot longer than anticipated, and one of my fallopian tubes was completely blocked. Thankfully the cyst was removed from my ovary, and my ovary was still intact. The next 6 months would be the best time for me to fall pregnant…

By October 2016 I was back to being in excruciating pain again, and had developed another large cyst on my ovary – time for another operation. By this stage I was on the NHS waiting list for IVF and could not proceed any further without the operation. As time passed by, from one hospital appointment to the next, I began to wonder if I would ever feel some kind of normality again.

15th May 2017 I went for my second laparoscopy. This was to be a day procedure, however the adhesions this time where so much worse than before. I was to again have an ovarian cystectomy, however there was a large cyst on both ovaries (two for the price of 1), plus I had my left fallopian tube removed, and endometriosis was discovered. This has to be it now, surely I am on the mend, surely this gives me the best chance at becoming a mummy at long last?

After having being out of hospital for a few days I developed a throat infection from the endotracheal tube and was put on antibiotics for five days. I came of the antibiotic on the Saturday 29th May, and I was so unwell all weekend. What was wrong now? By Monday afternoon, I could barely walk, I wasn’t eating, I had lost a dramatic amount of weight and just wasn’t myself. I was rushed straight to A&E. I was tested for absolutely everything, and was immediately admitted to hospital for the next 10 days, fighting a severe infection after the operation, and where I spent my 3rd Wedding Anniversary.

Fast forward to 23rd December 2017, where we received the best Christmas present – we were top of the IVF NHS waiting list. This was our time! We had waited so long for this, we couldn’t believe it. We collected all our meds between Christmas and New Year and I started nasal sprays two weeks later.

I was quite lucky really. The drugs did take a week or so to settle but I really breezed through the sprays and the injections right up until the Trigger injection. I’m not going to lie, that morning getting ready to go to the hospital for egg collection I was a complete mess- a mixture of nerves and excitement rolled into one. I was sick before we left our house, and it seemed like the longest journey ever. This is the day we make a baby – we’ve wait for this for so long. So much pressure rested on this day. I had read up and asked others in my position about egg collection, but everyone has their own experience, and mine was a painful one. I got the IV pain relief (topped up 3 times) and also gas and air.

This is us just after the procedure. We only got four eggs, but we only need one, so I was positive – this IS going to work. We phoned up the next morning to speak to the embryologist and two of our eggs had fertilised – we had two little embies! That night we wondered how they were doing, and what would happen when we called the next morning. On day three after egg collection we had our transfer (ouch)! And both little embies were transferred back in. That was it. There was nothing more that we could do; it was just a waiting game from now on in. I was so positive it was going to work. I mean it had to right? I had taken all the meds, ate all the right foods, read all the books, watched ‘The Secret’, had reflexology, acupuncture… you name it, I did it. After only five days I started to bleed. I knew it could be implantation but for me, it just seemed too heavy and I knew that this is where it ended.

On 9th March 2018 we got our BFN (Big Fat Negative). I was inconsolable that day. I think I cried pretty much from getting up until I went to bed. But there was nothing I could do. My body had been through so much, and it just could not take anymore. After a few days, my positivity came back. There was no point in dwelling on it. I couldn’t let it take over my life. We had to take a little time off, re-evaluate things, and then figure out what to do next.

And that’s me pretty up to date. We are now waiting on our NHS notes to arrive any day now, so that we can start all over again with a private clinic.

I decided to share our journey on social media. I didn’t know how others would take it, but in the end I didn’t really care. I knew it was so personal, but it helped me, and I find it so therapeutic. Talking about it helps me so much, and I thought if I could share my story it might help others to open up and talk about their experiences too. And it has. I am so thankful that I have been shown so much love and support through my Instagram page (the_wandering_wilsons) and my little squares tell a real and honest story of how far we have both come, and how grateful we are to have each other, and be in such a positive place, ready for the next step.

Written by Sarah for her blog, The Wandering Wilsons. Original feature can be seen on IVFbabble.com.

About Sarah Wilson
Im Sarah, mummy to Efi, our little rainbow baby & IVF miracle. My blog and Instagram tells my stories of life through miscarriage, our fertility journey and IVF, into the crazy world of motherhood and everything that comes with it. Join me on Instagram @the_wandering_wilsons for all we get up to and Efis adventures.