The family bathroom is currently beginning to resemble a menagerie.

As well as the pouring pots, the submarine, the squeezy balls and the flashing starfish, we now have Noah’s bleedin’ ark to join the party. Not your standard toddler bath toy, you may question why I have a plastic zoo to entertain the Wrigglet during our nightly dunking. The answer is: Mummy had a tiger mum moment. Let me elaborate… 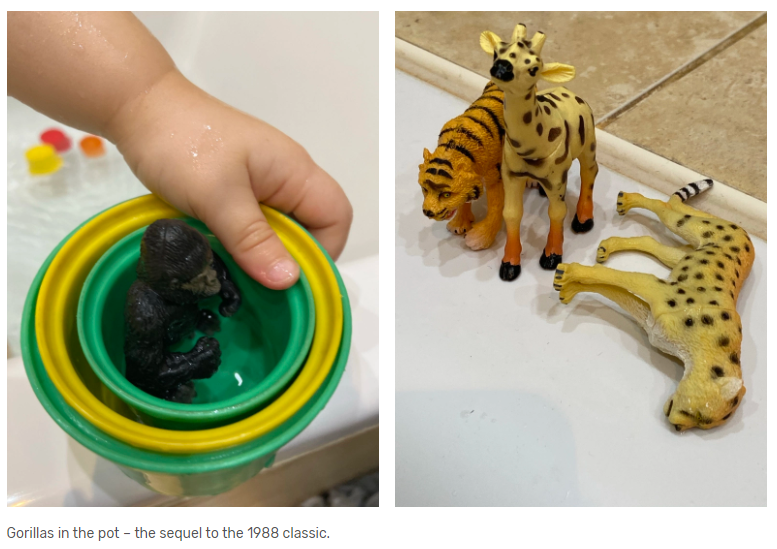 Tiger Mum was a phrase coined by a Yale professor, Amy Chua in 2011. She references what she sees as the fierce cultural expectations of Asian parenting where there is a strict emphasis on the academic. USA Today explain the ‘Tiger Parent’ is known for ‘putting excellence in academics and carefully chosen extracurriculars above leisure time. Parents are authoritarian and have high expectations. This is tough-love parenting where children are expected to respond to challenges.’

I’d say on a day-to-day basis I am very chilled out. We don’t go bonkers over screen time – if he wants to chill out with some Paw Patrol, he can. We go out and explore all that our location has to offer. We tackle crafts and puzzles. We do lots of physical stuff because little man needs it. We read books. But as far as his development goes – I figure he will do things in his own time. I will offer experiences but I am not going to push, push, push if he’s not ready.

As an ex-teacher, I have assessment ingrained in me. I have levelled the life out of little people for my entire career and compared one against another to group and plan and stretch and support. Yet with my own little man, I’ve just taken each day as it comes. When other babies were doing back flips and cartwheels, I patiently waited for Harry to start walking. When I saw, mostly girls, having proper conversations, I was still, not so patiently waiting for a ‘mumma’ (only impatient because it seemed that it was acceptable to say Dadda whilst just grunting at me – the one who does pretty much everything for him. The injustice!).

So it came as a bit of a shock to me, when I attended a review at his nursery, that I suddenly had a tiger mum moment. The Wrigglato (as he is affectionally named in our house) attends nursery one day a week. He started at fifteen months in the baby room and has now moved up through to the toddler team. When he shifted to the older toddlers, I was offered the opportunity to meet his key worker and discuss his targets.

The profile came out and I was able to share in some of the lovely activities he has carried out and enjoy hearing about what other people see in him. Elle then started talking about assessments. Now I know the Early Years Curriculum in the UK and how children are assessed as emerging, expected or exceeding against age-related expectations. Yet hearing my little two year old talked about in these terms felt completely alien! There was me saying as long as he is happy, healthy and making friends I’ll be happy, until Elle said that he was only emerging in his understanding of the world. It was at that moment the growl of the tiger was felt within me. ‘My child – but he’s a genius!’ I then got a grip and nodded and agreed. They see him one day a week. They have fifteen other children to assess. And he is only two – of course he will be emerging at some things.

I found my inner Dolphin Mum – she who “seeks collaboration, flexibility and balance.” This parenting style is further defined by the acronym POD. P for play and exploration, O for others and D for downtime, which includes rest, exercise and sleep. (USA Today) I was practically clapping my flippers as Elle went through the rest of the areas for learning where Harry was at an expected level of development.

Tiger mum then clawed at my shoulder. “How can he be emerging – he went to the British Museum last week. How many other toddlers have faced-off to a sarcophagus. Then there was the Science Museum this week – he is now fluent in friction and forces…” Then Dolphin Mum calmed the situation with the reminder that he will have plenty of time to jump hoops and discuss Mesopotamian culture, when he’s at university. It was just cool to count the toes of Greek statues whilst Mummy got to wonder why all the genitalia had been removed and drink good coffee.

Since the review I have once again chilled out. I did take a look at the age-related expectations in ‘Development Matters’ when writing this and I know there are bits he could be doing more of for example, pretend play, but I’m also confident that when it comes to ‘playing with small-world models such as… a train track,‘ he could probably write the curriculum thanks to Thomas the Tank Engine. However, I know not everything will be a strength for him. I am excited to see where he will excel and will support him in those areas he won’t. Let’s just hope he’s got his Dad’s maths skills!

The dolphin mum in me has suppressed the tiger. I will continue to offer experiences and just have fun in exploring learning. We have not discussed the scientific features of each animal family at bath-time but we are currently really enjoying animal wars. Gorilla currently has the most battle wins and has taken out giraffe in a range of brutal manoeuvres, including a tragic drowning. Perhaps next week I’ll swap the animals for dinosaurs and we can break Diplodocus in to syllables whilst phonetically spelling Tyrannosaurus with foam letters. No pressure Harry….