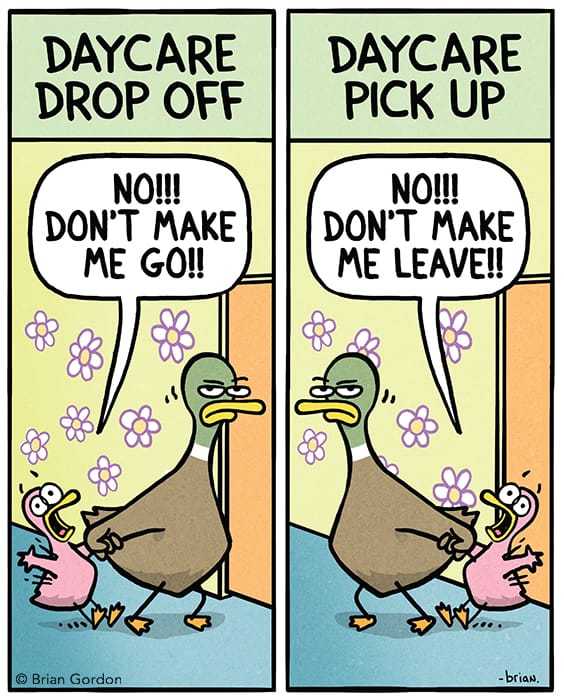 Before I had kids I just assumed I’d send them to whichever one was closest and that would be that, but there’s so much more to it than that.

Big one started a nursery setting at the start of the year. I picked it mainly because others I knew were sending their children there and although it wasn’t the closest, it was quite cheap and after the initial look around (I thought it was small but functional) I was happy to sign him up to start once a week. For the next 6 months, although there were a few issues and problems, there was nothing major that made me think, ‘Hang on, something isn’t right here’. Each week he happily ran in without a backwards glance.

This all changed 2 weeks ago after dumping him into toddler room without a proper transition. My happy confident boy now screamed at the door refusing to go in, floods of tears clinging on to me. When asking him if he likes nursery I got more crying and shaking his head shouting ‘no’. For anyone that has met my kid, they’d know this really isn’t like him and something must have happened there for him to react like this both weeks.

I made the decision to move him. But where to start? This time I thought I’d look around a lot of places. Although I used Ofsted and Fb recommendations as a guide, I’ve found visiting places is the best way to judge.

For each of the visits I took him with me and used his reaction to base my choices. This was hard as he seemed to enjoy anywhere we went! One of the places we went to he immediately ran off to play and didn’t even check I if I was there. It was lovely to see my old happy boy back.

So with him seemingly happy at most of them I then had to narrow down the choices…how do you do that?

Availability and opening times was one of the biggest things for me.

Prices – How did they compare to others, if they were more expensive, was there a reason?

The setting and resources – How were the rooms laid out, what toys were available, what outdoor things were there?

Amount of children – How many children were in the class maximum at any time?

The nappy changing, feeding and sleeping facilities – what was available to them? Are allergies taken seriously with food?

Security – How do people get in and out, how do they pick up children, is the building and garden secure?

One of the most important aspects was staff. Staff turnover, staff attitude and how staff interacted with children and parents. Communication between parents and staff is key to a successful placement to ensure the child is happy.

All that running through your thoughts is enough to make anyone’s head swim!

Eventually once you’ve managed to narrow the choices down, don’t be afraid to do a taster day before committing.

Big one will be starting a couple of settings to see how he gets on and hopefully will be enjoying the time again instead of being sad. I’ll keep you all updated on how he gets on!

Written by Shaz Rafferty for her Facebook blog, Zebra Mumma.