What it’s REALLY Like Having Two Children Close in Age

written by Bump, Baby & You

I knew once I had my eldest, Zachary, that it would not be long before I had another baby.

What are the benefits of having 2 close in age?

Firstly, we never got out of the baby stage; so we never got used to my eldest being too independent before being relied on again. We hadn’t long stopped middle of the night feeds, we were still being woken frequently through the night so we hadn’t started to get used to sleep again. We were still changing our eldest’s nappies, so now we just had double the nappy changes to do.

Make nappy changes on the go easier with this portable chevron changing mat.

The clothes are easily passed down.

Whenever my eldest outgrows something, and as long as it isn’t too stained or worn out, I always pass it straight down to Dylan. This is so handy. It works with shoes too! So Dylan is always good for clothes, he’s got more than me! My struggles are keeping on top of all of Zachary’s growth spurts. I just love passing clothes down and getting as much wear out of them as I can. As let’s face it, they grow out of them too quickly! We even now pass Dylan’s onto his cousin.

The toys have always been shared

It has been a blessing that they love the same toys. So for birthdays and Christmas, they both benefit from each other’s presents. They play so nicely with their toys and they always have. The gap in terms of toys has gotten less too, as when Dylan was a baby obviously they shared a lot less. Although, Zachary was always trying to snatch his dummy and play with it. Nowadays, they get the Minecraft figures or Pokemon figures out and have hours of fun together.

They have the same taste in TV programmes and films.

Again, they hardly have any arguments with the TV remote as they are both into the same TV programmes and films. Occasionally, our youngest Dylan will want to watch something a little ‘scarier’ such as Scooby Doo, but usually they are both happy taking it in turns and enjoying each other’s choices.

Save arguments over the TV with a DVD like this- the whole family will love it!

I mean, they do have their moments bickering and fighting and they do very much need some space from each other, but genuinely they are best friends. The love they have for each other is unreal. One morning, we were running late and I really needed to finish their pack ups, Dylan had done a number two and was calling for me to come and wipe his bum. Up steps his big brother, they had such a giggle but Zachary went above and beyond for him. He is always watching out for him, looking after him, grabbing him a blanket when he gets sleepy and helping him reach bits. In exchange, Dylan will take care of his big brother when he finds things overwhelming and scary as he is a bit tougher that way. I am utterly proud of them, and I am hoping that this special friendship and bond continues always.

They love playing together and with friends.

We are very lucky that some of their best friends also have siblings of similar ages, so when we meet up for play and park dates; everyone has fun and no one is left out.

It’s only been since I have been spending more time with my nephew, that I realise just exactly how much the boys entertain themselves. I try to join in, but their playtime is quite a special time for the two of them. They’re never lonely with each other by their sides. Whenever one is absent, the other feels it and is always asking for them. We do have family time together with a board game and stories in the evening, but when they play and watch TV, or doing their crafts, they are quite content with each other.

Playing matching is so much fun.

This one happens a lot less these days as Zachary finds it more embarrassing to match with his brother, but because they have a lot in common, they do still have the occasional same top. When they were younger, I just found them so cute when they were matching. A downside to this now though, is that their clothing size is so similar that folding and putting washing away is a pain as I’m unsure of who’s is who’s. 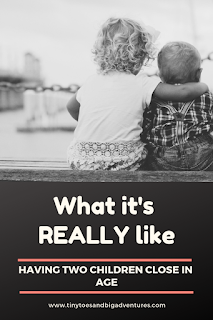 So, how do we cope with two close in age?

By keeping a cleaning schedule.

Keeping a cleaning schedule is a must for me. I usually spend half an hour a day cleaning the house and nothing more. By doing a little each day, however, I feel like I am keeping on top of it well. The best person to follow to help with a cleaning schedule is The Organised Mum Method. When I know what I am meant to be doing each day, I feel more organised and on top of it already.

By being organised all year round.

This is another key one. I am always looking ahead to what events are coming up, whether that’s a holiday, birthday, Halloween or Christmas. I can NEVER be too organised. I am always writing lists and planning the events and staying organised all of the time.

My blog post here shows how you can be an organised Mum all year round.

Taking a day at a time.

I’m going to be a bit of a hypocrite here and say that although I do stay organised all year round, it’s also essential not to get overwhelmed by what’s ahead and have ‘a day at a time’ attitude. One day will be rubbish, the next day may be even worse, but the following one may be amazing. It’s much better if you break it down one day at a time.

Sometimes I think the best thing is to let them have their sibling squabbles. Sometimes they need a rough and tumble fight. Sometimes they need to call each other names and lash out. They’re brothers, and frustrations and emotions build up. It’s only natural that this may get too much at times, so I do let them fight TO SOME DEGREE. I also know when enough is enough. I will always then be encouraging them to make up. Which they do quite easily. Half of the time, they are each other’s best friends and the other half, they bicker.

So, what are the downfalls to having two close in age?

See point above- as their clothes sizes get more similar, it is getting increasingly harder to even figure out who their ‘normal’ clothes belong to, let alone the matching ones. Several times Dylan’s ended up wearing Zachary’s and Zachary will suddenly come out with something clearly too tiny for him. It does get amusing, but also frustrating.

There are stages when it is hard work. Really hard work.

When Dylan was a baby and Zachary was a toddler, I was in constant demand. If one wasn’t waking me up, it was the other. Same for illnesses, at the toddler to child stage, one or the other had something up. Now their age gap somehow seems smaller, so they seem to be at a fairly even level. But definitely the first initial stage was very tiring. But on the other hand, I got it out of the way quicker.

Never going through a good stage at the same time.

This one may seem odd, and possibly just sheer bad luck for me. But, I swear that they can never be ‘good’ at the same time. Whether thats moment by moment, day by day or those horrid phases they go through. If one is being ‘good’ you can bet the other is going through a tough stage or day being a turd. That’s putting it frankly, but it’s so true. When the boys were a bit younger, Dylan was always the mischievous one- he’d be the boisterous one, break things, have meltdowns in public and be mean to Zachary and Zachary was always such an angelic child- they were very much like chalk and cheese (read more here). But then, when Zachary got comfortable at school, he started being rude, demanding, spoilt and just horrible and suddenly this mischievous toddler blossomed, and Dylan became the angelic one. I swear now, it changes constantly but they for some reason can never be good at the same time- unless they want something. Which leads to my final point.

They can gang up on me.

They can then really turn into the troublesome two. They team up and become the best of brothers, they ooze their brotherly love (read more here). I am the enemy and they must defeat me. But equally, if somethings in it for them- they can turn on each other.

So, as you can imagine raising two children close in age has been more of a walk in Jurassic Park then it has through a glorious summer’s day park. But is it worth it? Yes. And I would do it over and over again if I could. I miss the baby/ toddler days. I miss having them home with me. I would happily live these years all over again. But I have done the hard graft, now it’s time to enjoy my boys exactly how they are now and get excited about what’s to come in their future. I really do hope they continue to be each other’s best of friend. 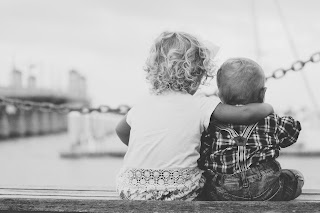 If you could relate to this blog post, then please do give it a like and a share on your social media. Also, pop a comment below; I would love to hear from you

WRITTEN BY GAYLEEN HODSON FOR HER BLOG, TINY TOES AND BIG ADVENTURES.

Are Your Friendships Healthy? Here’s How You Can Tell.