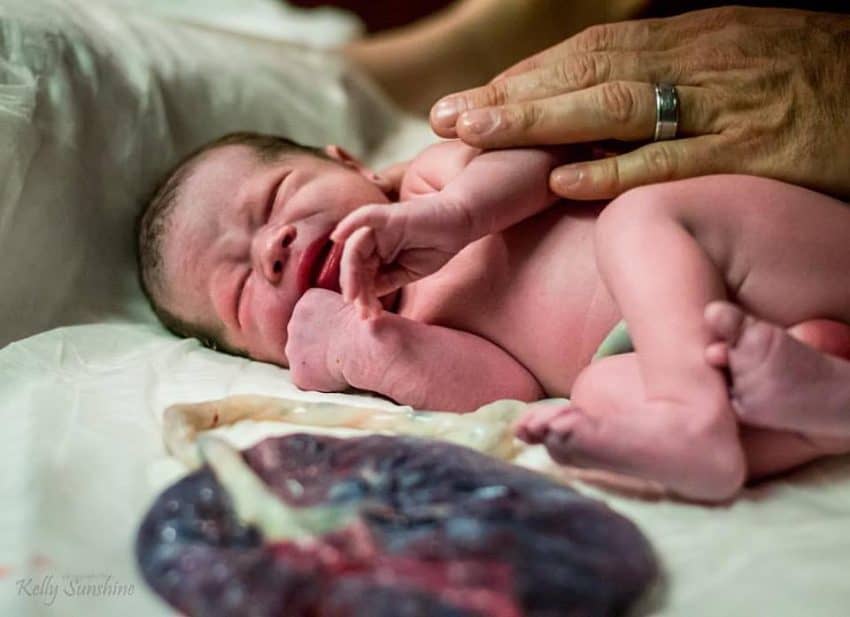 What IS delayed cord clamping and what are the benefits?

Pretty amazing, that’s what it is! Not familiar…? Check out this guide!

After your baby is born, the umbilical cord will continue to pulsate, and transfer blood, oxygen and stem cells to your little one until the cord has stopped pulsating.

Cutting the cord immediately after the birth has been standard practice for many decades, but recently scientific research has shown that it is detrimental for your baby as immediate clamping means your baby will miss out on a large amount of blood, around 214g which doesn’t sound like much but it makes a difference! This extra blood is at least a whopping 30% extra blood, if not more!

Increased iron levels in the baby up until they are six months of age, which benefits growth, and physical & emotional development.
An increased amount of stem cells, which helps with your baby’s growth and their immune system.

Babies who have immediate cord clamping (particularly boys) have also been shown to be more likely to:

In addition, an Australian study has shown that 100,000 premature babies could be saved a year by delayed clamping; the Australian study, which can be found in the American Journal of Obstetrics and Gynaecology, looked at data on nearly 3,000 births that took place before 37 weeks of pregnancy in 18 clinical trials.

The study found that around 9 percent of premature newborns died when the umbilical cord was clamped immediately after birth, whereas only 6.4 percent of premature babies whose cords were clamped after one minute died, which is a significant reduction of almost one third!

This research has resulted in recent changes in guidelines and practice supporting delaying clamping. Waiting until the umbilical cord has stopped pulsating and becomes white is starting to become standard practice in births where there aren’t complications where your baby needs a hasty transfer to supportive care. This means that you may be able to have delayed cord clamping even during an emergency caesarean depending on the category of emergency; I had an emergency caesarean with my son and they did delayed clamping as per the hospital standard practice, which I was SO pleased with!

Usually your midwife or obstetrician should be able to feel when this happens by touching the umbilical cord. If there is a medical reason as to why there isn’t time for this, then the midwife or doctor should wait at least 1-3 minutes after the delivery before clamping and cutting the cord.

The NICE guidance recommends that ‘umbilical cord clamping is delayed in all maternity units for at least 1-5 minutes in all babies unless the fetal heart is less than 60 bpm and not getting faster, at this point, for practical reasons, the baby may need to be taken away to get breathing support.’

What is the difference between delayed cord clamping and a ‘lotus birth’…?

The benefits of cord clamping are redundant once the cord stops pulsating as this means that the transfer of blood, oxygen and nutrients has ceased.

However, ‘lotus birth’ has been in the media a lot in the past year or so, due to an element of ‘trendiness’, and also ‘woo’, which basically means pseudoscience and a misunderstanding of the biological mechanism behind delayed clamping.

In laments terms, a ‘lotus birth’ is the practice of leaving a baby attached to the placenta by the umbilical cord until the cord dries out and snaps off – an extension of delayed cord clamping. The main purpose is to allow maximum blood and nutrient transfer… but this doesn’t happen once the cord stops pulsating, rendering the process pointless.

Scientifically, there are no benefits of lotus birth; in fact, experts such as The British Royal College of Obstetricians and Gynaecologists have warned that it carries a significant infection risk, stating;

‘If left for a period of time after the birth, there is a risk of infection in the placenta which can consequently spread to the baby.

The placenta is particularly prone to infection as it contains blood. Within a short time after birth, once the umbilical cord has stopped pulsating, the placenta has no circulation and is essentially dead tissue.

If women do opt for umbilical non-severance, the RCOG strongly recommends that their babies be monitored carefully for any signs of infection.’

However, some parents choose not to heed this warning and keep the baby attached for emotional and spiritual reasons.

Delayed clamping is awesome, but the benefits cease when the cord stops pulsating. If you live outside the UK, somewhere where delayed clamping hasn’t become standard practice, you should consider making it a clear desire on your birth plan due to the proven benefits that the extra 33% blood volume can have for your precious bundle. Isn’t science awesome?!

I hope that this is useful information! Tell us your thoughts on delayed clamping becoming increasingly standard practice for the NHS in the comments.