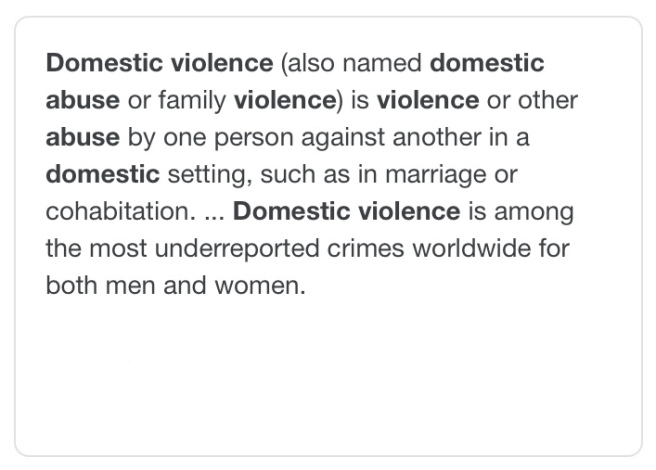 Bear and I live in a refuge and have done since June 26th 2017. I was scared and unsure about what to do next, I had so many misconceptions and I was blessed to be offered a place.

6 in 10 women will be turned away due to lack of bed-space. 1 in 4 women will experience domestic abuse in our lifetime. In the year ending March 2016, 1.2 MILLION women reported experiences of domestic abuse in the U.K. These are just the statistics of reported incidents and the actual numbers are likely to be much higher. So why, when the domestic abuse statistics are THIS high, is funding and support being cut, at times by half? When I left my hometown, my first port-of-call was Women’s Aid. I called incessantly with no response for weeks due to busy lines.

These charities are overwhelmed and under-resourced. Since 2010, this country has lost a massive 17% of its specialist domestic violence refuges—a regular occurrence for sheltered housing. A slap in the face for anyone experiencing domestic violence. For many women, the easiest option is to stay with abusive partners simply because they have nowhere else to go. Often cut off from family and friends, their only support system (whether financially or emotionally) is their abusive partner. They become dependant on the one person they need to be away from.

In comparison to some of the women’s stories I have heard and read, my own experiences were much less graphic. But matter nonetheless. My relationship was toxic, draining and unbearable for the most part. It took me 4 years to pluck up the courage to leave. I left my hometown, my job, my friends and everything I knew to start a new life; to make a better life for my son who is now 18 months old. Having experienced domestic abuse in some form since I was born, it was all I had known. If all you know of love is to be treated in this way, if all you know is heartbreak, in the sickest and most masochistic of ways it becomes comforting. Painful. Horrific. But comforting in its familiarity. Although, unsafe both mentally and physically, it’s all you know. And that is why speaking out is so important. Love is not control or coercion. It is not a slap in the face when you say something out of term. It is not obsession. And you deserve more than the way you are being treated.

The effects of experiencing domestic abuse are long-term and deep-rooted. The victim lives in near-constant fear of the unknown, fear of having nobody. Speaking for my own experiences, it’s hard to figure out what’s real—how do you know what ‘normal’ is when you have never experienced it? I had no sense of normality and I’m working hard to get that back. I question myself and I could write a novel with the self doubt stacked up in my head—I believed I deserved it because I did this or that, I believed I was wholly unloveable because I was told I would never be loved or that I could never find better. I kept it largely secret and never revealed the full extent of my experiences until very recently, almost a year on, because I didn’t want to believe that somebody I loved so much could treat me so appallingly. I turned a blind eye to the cheating I knew was going on, refusing to look into things or ask questions simply because I didn’t want to face the facts: I was always better than the experiences I had. And I always deserved more. I internalised my feelings and my pain because it was the easiest option and that was my coping mechanism and still is.

Abused women experience conflicting emotions; there is fear, anger, humiliation to name a few. We are not powerless. We are not weak, submissive victims—we are the opposite and moreover, we are NOT our experiences. We are NOT just another statistic. Making the decision to leave is terrifying. It’s unknowing and full of uncertainty, but it’s the start of a new life where you are in control of every aspect and you will never have to answer to another person. You will never have to justify something as menial as why you are choosing to wear a little makeup and a nice skirt to work. There is support out there, and laws are being amended and new ones added to make punishments for perpetrators worse.

Help and support in the U.K. and Ireland:

Learn More About Access To Support on the BBC Site Here

Written by Molly McMullan for her blog Life With Tristan.