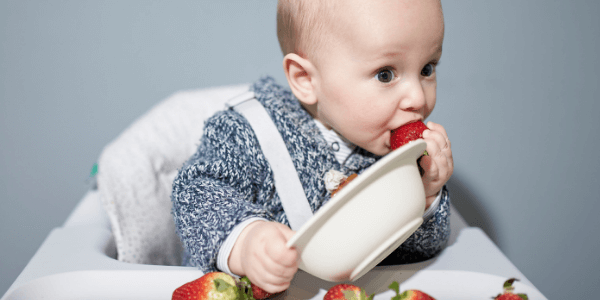 Disclaimer: this guide isn’t intended to supersede medical advice. You should always commence weaning an allergic child under the supervision of a medical professional – preferably a paediatrician or paediatric dietitian. This is just my experience and written to hopefully support parents of a newly diagnosed child. Please do not take this as medical advice and always speak to your GP or health visitor if you have any concerns.

Weaning is a rough road, especially when your little one suffers with allergies!

Dairy allergy/intolerance is more common than previously thought – between 1.9% and 4.9% of infants worldwide will have it. It is becoming more commonly diagnosed due to increased awareness – my son was initially diagnosed with CMPA, and later also diagnosed as having secondary lactose intolerance as a result of the damage to his digestive tract caused by the CMPA – luckily this is only temporary. However, milk allergies are thought to be undiagnosed due to GP’s being hesitant to refer, and passing the symptoms off merely as ‘colic’.

Once diagnosed at 4 months after 6 doctors appointments where I was reduced to tears and belittled for suggesting CMPA, we were begrudgingly referred to a paediatrician the moment I uttered the words ‘practice manager’, and lo and behold… I was right.

The prospect of weaning really worried us once we finally got Max his diagnosis, but now we know that with due care and observation, it can be done with relatively few issues. Obviously if your child’s allergy is life threatening then this may be an entirely different kettle of fish – Max’s isn’t, fortunately.

Here is my guide to weaning a baby with dairy allergies, based on our experience.

About LI and CMPA

CMPA and LI, interestingly enough, aren’t the same condition. CMPA is an allergy to the protein in cows milk, which can cross over into breastmilk. Lactose, on the other hand, is a sugar which we break down with an enzyme called lactase. A deficiency in production of lactase is most commonly the cause of lactose intolerance, but as I previously stated, CMPA can cause secondary lactose intolerance through damage, which is only temporary thank goodness! True congenital lactose intolerance in babies is very rare and seen as life threatening.

Very often, I see mums saying ‘just cut out lactose’ to mums who breastfeed newly diagnosed lactose intolerant/sensitive babies – this is incorrect. All mammalian milk contains lactose regardless of diet. However, this can be treated by lactase drops to break down lactose in baby’s belly. Sometimes babies who are only mildly lactose intolerant still thrive on breastmilk  – it’s a huge spectrum and totally a case of individuals.

My sons issues were diagnosed so late that we had already stopped breastfeeding by this point as we were told his symptoms were caused by a variety of different breastfeeding related issues which we now know to be incorrect, which is disappointing BUT we know for next time if the next baby has the same issue.

Typically babies go undiagnosed if they continue to gain weight which seriously winds me up. Babies with allergies can continue to gain weight! Max continued to gain but had severe reflux that medication did not touch, bad eczema that got infected, very distressing colic and gas that wasn’t helped by usual remedies, and surprisingly his hair all dropped out which is apparently a symptom too! He was also very wheezy and congested after feeds, another typical dairy allergy symptom.

His gastric symptoms were almost ALWAYS worse at night – which is pretty common with CMPA/LI babies as the excess gas builds up in their system as the day progresses, which some people don’t understand and can result in people being unfairly sceptical and not believing your child has an allergy despite the official paediatrican diagnosis, and  not seeing your child often enough or at the right time to make that judgement, not to mention their lack of medical qualifications or knowledge of the condition unlike the paediatrician who made the diagnosis.

Long story short, it was awful for my poor little boy. I had to fight to be listened to!

Very commonly, children can outgrow CMPA over time. Secondary lactose intolerance (the most common form) is also only temporary. Less commonly, a child will retain their allergy/intolerance, in which instance your paediatrician will provide you with prolonged support.

Here is a comprehensive list of symptoms to look out for.

Max was initially prescribed a formula called Nutramigen, which is hydrolysed, meaning that it contains a small amount of broken down dairy to build up a tolerance, but some allergy babies still struggle with it. We ended up on Neocate, which really helped, as it is totally amino acid based and free of any allergens. Tasted vile, smelled vile, and smelled even worse when brought up as reflux. I do not miss constantly smelling of Neocate and sour vomit! At around the 5 month mark, it became apparent that the maximum doses of omeprazole and ranitidine were not helping – he was constantly vomiting, so our dietician advised us to introduce small amounts of puree (no gluten) to line his stomach. All I can say is WOW. It worked wonders but I ask that mums don’t use reflux as an excuse to wean early off their own back without trying medication first or without seeking a paediatrician and dieticians help. Food is a last resort.

We were advised to start it earlier than 12 months as his allergy wasn’t life threatening. Different dieticians and paediatricians advise different start points all depending on the individual child. Some allergy babies won’t be able to do the milk ladder if their allergy is life threatening.

What is the milk ladder?

“The home reintroduction performed in children with mild to moderate non-IgE-mediated cow’s milk allergy can be carried out using a Milk Ladder. Parents should follow the Milk Ladder under the advice and support of a Health Care Professional (HCP), ideally their GP or dietitian.” Cows Milk Allergy Guidelines

With the approval of our dietician, we did it slightly differently as I did not feel comfortable with giving Max so much cake and biscuits! We started off items containing milk powder – Aldi baby porridge mixed with fruit, and slowly started adding small amounts to his lunch (mashed potato or scrambled eggs) over a period of few weeks to mimic the amounts he’d be consuming in the higher steps.

We then started offering a spoonful of yoghurt after his evening meal, increasing this slowly and carefully – all paediatrician and dietician led, yours may advise differently. Finally, we started adding full fat cows milk to Weetabix for his breakfast, which happened at around 9 months which is the point where he stopped accepting any milk to drink, be it Neocate, soy, cows milk, goats milk… he just wouldn’t drink it any more! We couldn’t force him to, so our team advised a multi vitamin and a carefully orchestrated meal plan to ensure that he was getting all the nutrients that he needs.

Max’s weight gain did slow a little when he refused milk at 9 months but has gone back to to the 75th centile for weight, and 99th for height by the point of his one year Health Visitor visit – she was very impressed considering he’d stopped drinking any milk at 9 months!

He is now one and only gets a runny bum if he has an excessive amount of dairy on top of his typical consumption. He has ‘mostly’ grown out of it. His skin and colic symptoms have vanished, his hair grew back, and his entire temperament is much happier. We were lucky in that we managed to complete the milk ladder quite early, so I wouldn’t advise that parents try the milk ladder without professional thumbs up and guidance as all babies are different.

Weaning before 6 months is not advisable unless there are medical circumstances mitigating this – and if it is led by a paediatrician/dietician. Health Visitors aren’t doctors, and if they feel that you should be weaning your baby before 6 months, they should be referring you to someone specialised in dietics.

We always planned to stick to Baby Led Weaning at 6 months, which went tits up when by 5 months his reflux became completely out of control, so our paediatrician and dietician advised a gentle transition onto puree.

We stuck to pure fruit and veg purees, due to gluten not being suitable for young tummies. We made our own, and used Ella’s Kitchen to ‘gap fill’ when we were out and about. Ella’s Kitchen does tend to contain lots of sweet fruit so be careful if you’re not wanting a baby with a sweet tooth!

Stick to this principle;

The milk ladder (above) states suitable foods to help follow this process, but the health professional supervising would be able to suggest alternatives if, like me, you think the food on the ladder is a bit unhealthy.

Alternatively, you can make your own;

You can find some AMAZING dairy free baby recipes here!

I hope that this guide has helped other parents who are still reeling from a recent CMPA/LI diagnosis. It’s not easy or fun, but it can be managed and isn’t the end of the world.

Thanks for reading! Love from Katie. Xx