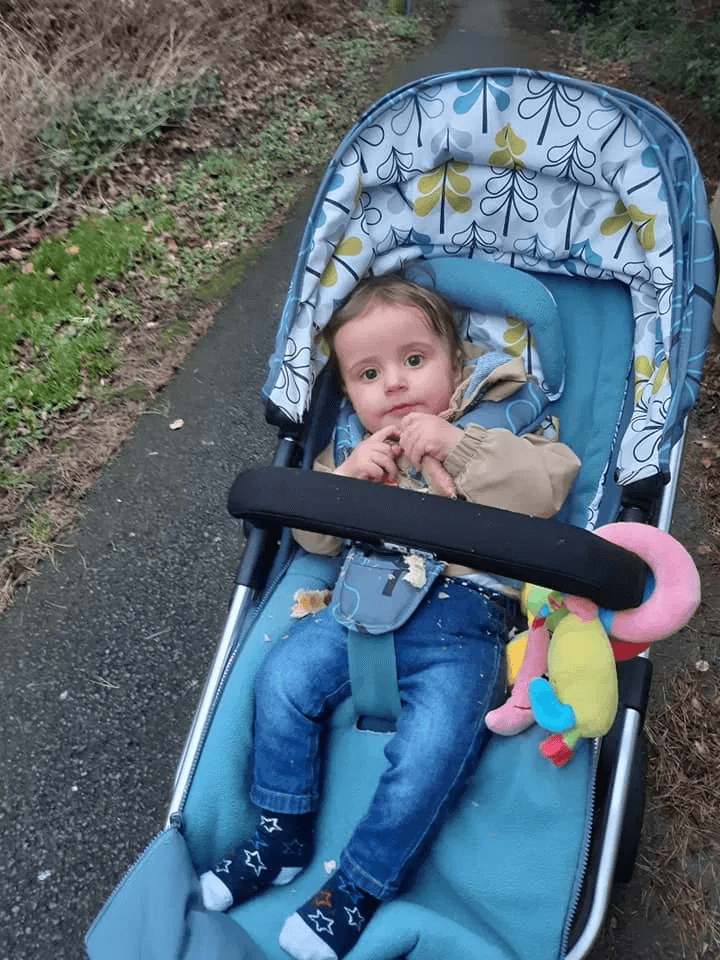 I Swore I'd Never Be 'That Mother' Yet Here I Am

Over time, we’ve sort of developed a little inside joke about how Kaiber will never be one of those ‘sausage roll babies’ which is pretty much as simple as it sounds to any outsider not in on the joke.

You see, here in the North it is a very common occurrence to exit a Greggs shop, turn a corner and walk straight into yet another Greggs shop. They’re absolutely everywhere and that probably has a lot to do with the fact that there’s not much us Northerners love more than a piping hot pasty and a cuppa to go on a rainy day with a pack of two stotties in our bag for a ham and peas pudding should we feel peckish when we get home. As the bakery chain continues to dominate our high streets so do the army of stroller-cruising, sausage roll wielding babies.

It started as an innocent observation but the more we used the reference, the more it became a euphemism for what we perceived to be lazy parenting. I know, I know.

As you read this I can almost guarantee that you’re one of the below:

Today was the day that I levelled up from beginner to intermediate as, yep, you guessed it, Kaiber was only just recognisable under a shower of soggy, golden pastry flakes as he wiggled a limp, grey sausage at passer-bys Ramsey Bolton style. This was by no means part of my plans for the day but in true unpredictable baby fashion, Kaiber decided to take a very rare early afternoon nap just as I was planning on making a move to leave (typical). Awaking from his slumber left us with not even four hours until bed time so I was left with no choice but to change him, boob him and throw him in his pram before rushing out to catch the bus. Ok, so maybe I am making excuses but regardless, the little man had to eat and we weren’t inundated with options in the crowded, sparse rural high street.

Watching my baby grin and show me the part chewed, barely warm processed meat handing from the roof of his mouth, I gulped down my pride and laughed along with the flock of old ladies as they stood around us.

I’ll hold my hands up and admit that this isn’t the first time that I have fallen from the grace of my high horse since becoming a Mother and I’m sure it won’t be the last. It’s very easy to cast judgment towards a person or situation that you’re yet to be in until the shoes are on your own feet and that’s never been so true to my own life as it is now Kaiber is getting bigger.

I swore I’d never let my baby be outdoors with no socks/shoes cosy toes or not. I would often glance at babies in pushchairs with nothing on their feet and think ohhh that poor baby.

Not poor baby, poor parent for finally having to call it a day and give up after replacing the footwear in question several thousand times before realising they are fighting a losing battle. Babies just really hate having anything on their feet. It starts with wriggling and kicking off their socks until they discover they can pull them off by hand and throw them out of the pram.

I am so grateful for the colder weather so I can disguise my baby’s bare little tootsies with blankets or his snow suit.

I swore that my baby would only eat good wholesome foods, fruit and veggies for BLW and then home cooked meals packed with healthy ingredients when he got a little older. We wouldn’t be caught dead handing our precious munchkin a baby crisp or heaven forbid a milky bar!

Preparation is key. I would meal prep, cut and prepare all of his snacks whilst making sure our cupboards were stocked with colourful goodness. Only the best for our little boy, right?

I do try my very best to ensure that the majority of foods he consumes are of the healthy variety but it gets to a point where it just isn’t sustainable or convenient to do so 24/7. It wasn’t just the sausage roll, I will admit. There has been plenty of quick-fix baby food meals when we’re pushed for time and can’t wait for him to play with and throw his dinner all over.

As for snacks.. well, let’s just say we’re no stranger to melty puffs and biscotti and OK, maybe there has been the odd milky bar. Don’t get me wrong, he eats his fair share of fruit and veg (avocado, melon and broccoli being some favourites) but there’s no harm in a frozen veggie waffle and birds eye fish finger either.

I’ve come to accept that as long as he has a full tummy and a smile on his face then I’m doing an alright job.

I swore my baby would be dressed in a fresh, adorable outfit everyday without fail, even if we’re having a lounge in the house day and then I realised just how messy the little creatures are.

I mean, after the third or fourth outfit change in a day it really is time to come to terms with the fact that onsies and vests are more practical annnnnd on a really messy day there is no shame in your baby crawling around in just a nappy.

With all the poop, pee, drool, food, sick and stains of the unidentified variety I now save the cute outfits for strictly going out purposes only and even then an early change is usually inevitable.

I swore my baby would never be crying in public, not on my watch. He would always be a happy little chappy and I would have the patience of a saint with all the time, energy and toys in my bag to ensure we avoided causing a scene when out and about.

I used to have this overwhelming fear of being stuck in a shop or on a bus and not being able to stop my baby from crying whilst everyone stood staring at us. It was something I was so terrified of it stopped me going out for quite some time.

The thing is, when you’re out you can’t tend to baby’s beck and call instantly all of the time be it a nappy change, milk, food or cuddles and let’s be real- sometimes babies just cry for cryings sake regardless what we do for them.

There’s only so much we can do when we’re out and shopping with our little ones can often be stressful enough without judging eyes making you feel like a terrible Mam. If it’s been a really long day out and I know my baby has had 110% of my time, energy and effort all day long I see no harm in him having a little cry whilst we wait for a bus and I take a breather and a gulp of water.

If Sheila and Dot want to stand whispering and staring my way in disgust then so be it. They haven’t watched my singing, playing, carrying and tending to all day nor will they be there to witness me holding and nursing him for the hour bus journey ahead.

I swore my baby would never watch TV until he was a lot older but sometimes I need to actually use the toilet or make him some food and that may be my only method of escape no matter how short lived.

He never watches much and I don’t have it on before bedtime, those I have stood strong about but I see no harm in a little here and there or having it on for some background noise.

I also swore I’d never watch anything that wasn’t strictly rates U whilst he was present but during cluster feeding and long nights I sometimes just need to watch something with brutal gore and violence, drug use, strong language and the occasional sex scene with visible boobs just to keep me sane.

Now he’s older and more aware I can’t get away with watching anything of that sort unless he’s snoozing on me but let me tell you, when he was a newborn we binge watched the whole of last years Love Island (don’t judge) and I made my way through Killing Eve, The Affair, endless Serial Killer Documentaries, my fair share of crappy Horrors and a few steamy love films.

I swore I’d never touch a booger with my bare hands like I’ve watched many a parent do before but sometimes when one of those things is blowing around like a flag on a windy day and you have no wipes you just have to swoop in and grab it.

It makes me cringe by all accounts, I’ve always had a thing against anything snot-related and it used to raise the hairs on my arms to even speak of them but now I’m a Mother I flick those things over my shoulder like a boss.

I swore Motherhood wouldn’t define me.

I was completely and utterly adamant that I would be an outstanding Mama but still be Ash too. Baby photos and status’ would not take over my social media nor would baby talk be the only thing that came out of my mouth. I would invest time and energy into myself.

Of all the above, this is the one I failed at the most.

Motherhood completely defines me and has taken up every ounce of my life, my relationships, my personality, my very being. It’s all I think about or do from opening my eyes in the morning to closing them at night.

And you know what?

I’m actually okay with that and with all of the other promises I failed to keep.

Yes, a sausage roll slinger was just one in a long list of things I vowed I wouldn’t be when I became a parent and I have just slung my first sausage roll but strangely it didn’t fill me with absolute guilt and self-loathing.

I looked at the mess in the pushchair and all over Kaiber and then I looked at how happy he was and I realised I’m doing the very best I possibly can. 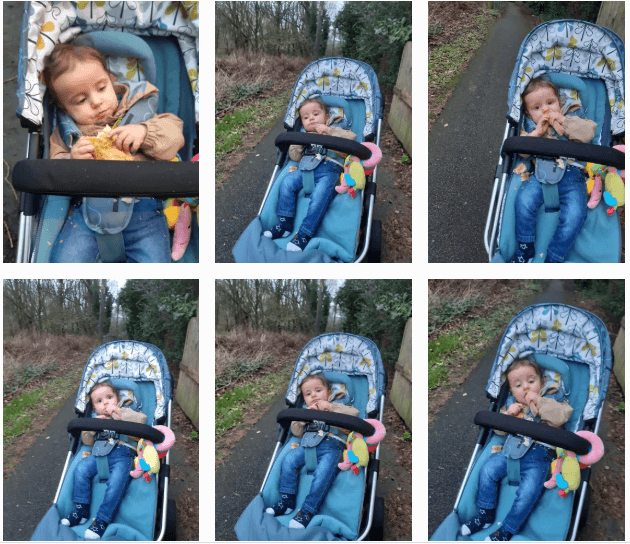