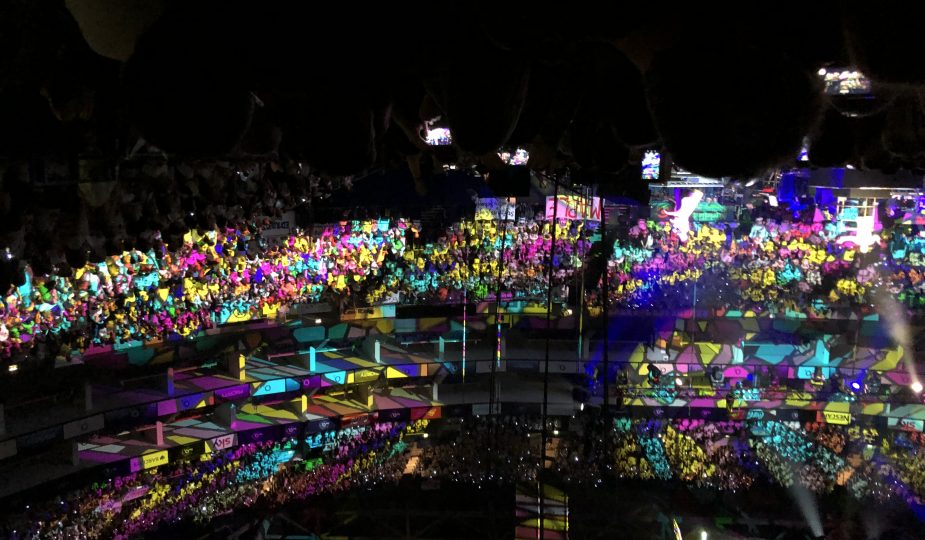 The Best School Trip EVER

Year 6 is a milestone year for kids. The last year at primary school. Preparing a move to a bigger school away from their creature comfort and safety. They also complete their SAT  tests. However, for one day at least, my middle boy got to forget all of that.

Finally it had arrived, after months of planning the day had come. The highlight of the school trip calendar. A trip to London. In fairness, he had been doing this trip each year since year 4, so the concept wasn’t new. It also wasn’t ‘just a trip to London’ either. Oh, it included us, the Parents too.

Each year, pupils from year 4 and above are given the opportunity to sing at the O2 Arena in London. It isn’t just them. Around 9000 children each night get to join the Young Voices Choir and form part the biggest school choir in the world.

Over a series of dates in London, Birmingham, Sheffield and Manchester the Young Voices Choir and selected stars from the music and dance world, join conductor David Lawrence and presenter Gigi Morley at major venues and perform to a bunch of excited and proud parents, together with members of the public at sell out arenas.

As school trips go, this is one both my boys have wanted to do. Not only is it an experience they will never forget. Its also a day off school and because of late arrival home they can skip the first part of the next day and arrive after first break. This was in fact my fifth consecutive O2 trip and the little lady is already keen to embark on her O2 adventures next year.

As parents, we not only get the chance to see our kids perform on stage at the O2, which in itself is

enough. We also get the opportunity of some guilt free, children free, time in London.

Mid morning on performance day, the parents, assistants and kids all congregate at school. Excitement fills the hall as parents and kids wait to find out which of the coaches they will be travelling on. We then convoy our way to London. Once there, the kids are taken off and the parents are set free.

Lets put that in context.

Parents, on a school trip wondering around London, without kids, for an entire day……. Amazing!

The kids are taken off by the teachers and assistants to get ready for the evenings performance. The have of course been rehearsing at school for several months. However, they now get to experience, the sound checks, dress rehearsals and lot’s of behind the scenes stuff. But, judging by my lads Instagram account, they do get a bit of down time too.

For our family. It was a little different this year. Due to my Dad’s health issues over the last few years he and my Mum haven’t been able to attend. Now that circumstances have changed, this year Mum was on the coach and raring to go. The little lady and the eldest had expressed an interest too. So, the kids Mum and her partner, would collect the other two from school and drive up to meet us in time for the start. Leaving myself and Mum with some Mummy and Son time.

I had a fairly good idea of what to do this time round. On arrival at the O2, we headed down to North Greenwich Pier and boarded one of the taxi boats you see zooming up and down the river. On board we grabbed a cheeky lunch time glass of wine and sat back and checked out some of the sights, at a leisurely pace.

Over the years, I have taken this trip and disembarked at various places. My favourite being Westminster, which, followed by a gentle stroll takes you past Trafalgar Square and into China Town. Or, a little further to Covent Garden. Both of which have amazing restaurants. Plus you get to take in some of the iconic sights too. Due to traffic, we wouldn’t have time for that this year. So instead we got off at Tower Bridge Pier. We wondered past the The Tower of London, before crossing the river and finding an Italian restaurant for a spot of late lunch. Leaving just enough time to return to the O2 to meet up with the other members of the party who had just arrived.

I’m sure some of you have been part of a Young Voices concert before and have experienced the atmosphere. To those that haven’t I will do my best to explain.

As the performance and the singing start and the light show begins, you are faced by a professional band, a conductor and 9000 children singing and dancing their little hearts out. It is breathtaking.

It is not only singing. This year they were joined by Urban Strides, a fabulous team of street dancers,

headed up by Andy Instone. These guys are nothing short of spectacular. They not only put on a show, they got the kids dancing and at one point Andy had the audience busting moves that I personally had thrown in a long time.

This years playlist of songs was jam packed with everything from The Kinks, The Cure, Duke Ellington and The Greatest Showman. Together with, songs from the featured guests.

Tony Hadley, who we all know as the lead singer of Spandau Ballet amongst his many other projects joined the kids this year. They were also joined on stage by the amazing Beau Dermott. The now fifteen year old that stole the

show on Britains Got Talent and was awarded the Golden Buzzer by Amanda Holden. Also joining them is another lady who my kids would have heard but probably not recognised, Sharlene Hector. For those that don’t know, Sharlene Hector is the lead vocalist of Basement Jaxx. Over the years she has also worked with Primal Scream, Paloma Faith, Mark Ronson and Blondie to name a few. All of which are part of our household record collection.

I can honestly say, I’m not sure what is cooler. My middle boy singing Gold with Tony Hadley at the O2 Arena, or my eldest lad saying to me ‘ blimey, he’s still got it, hasn’t he’ from the audience, aimed at Tony Hadley. Either way, I have cool kids. Tony Hadley, even made a point of telling the middle boy and his mate that they rocked, which made their day.

Tony Hadley, telling the boys they ROCK. Click and watch until the end.

The fact that all three of my kids knew who Tony Hadley was and they knew the words to his song Gold, is

clearly down to my tremendous parenting skills. In fact, I had already been given the heads up that he was in tonights show. During my lunch, I received a WhatsApp message with a picture of Tony at rehearsals together with the message,

The two hour show flies passed and before we know it, the Kids Mum and Partner were back in the car heading towards their house and the kids, Nannie and myself were boarding the coach back to school.

I am so thankful that our school takes part in this amazing experience. Over the years I have seen  pain, sweet and tears together with  the hard work that the teachers and assistants of our primary school put in. I assure you it doesn’t go unnoticed. I want to personally thank every member of every school that takes part. Because in turn, this allows our kids to experience something magical.

But mostly I wanna thank the staff at my kids school, because they rock!

The team at Young Voices are exceptional and if you haven’t experienced one of their concerts, add it to your to do list immediately.

Written by Ian Northeast for his blog Dad’s Delicious Dinners!