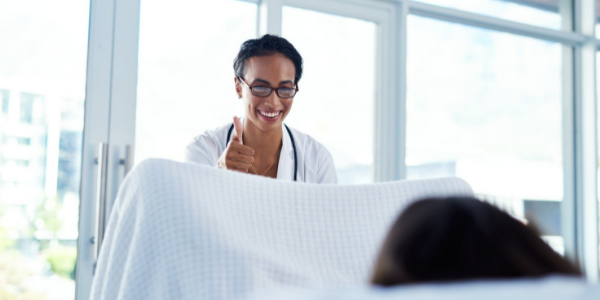 Some important news has broken for our Welsh mummies...

If you're due a smear and live in Wales, this news may affect you. The routine cervical screening interval in Wales has been now been increased from three to five years. Cervical Screening Wales announced this change due to the success of Human papillomavirus (HPV) testing in Wales.

The change affects those aged between 25 and 49, and where HPV is not detected in their test sample, following a recommendation from the UK National Screening Committee. This new change came into effect on the 1st of January 2022. Those aged between 50 and 64 in Wales already have a five year interval.

Smear reminder letters sent from the 1st January 2022 will advise patients that their next appointment will be due in five years under certain conditions, but women in Wales have been questioning what to do if their smear was due before the New Year, where they'd have been entitled to a three year follow-up, but have only been able to get an appointment or in touch with their surgery in January, only to be told it is now five years. In this instance, we advise speaking to your practice manager to ascertain whether the three year interval still applies.

'The HPV test we now use in Wales is more effective at identifying people at higher risk of developing cell changes which can cause cervical cancer. The evidence shows it is therefore safe to extend the time between cervical screening tests for people who do not have HPV identified.'

HPV is a very common virus that most of us will be exposed to at some point in life. In 99.8% of cervical cancers, various types of high-risk HPV are usually present which is why HPV is checked for in your smear sample. Wales introduced HPV testing in 2018, with around 90% of results showing no high-risk forms of HPV.

Annually, around 160 cases of cervical cancer are diagnosed in Wales, and in women under 35, it is the most common form of cancer.

'Testing everyone who attends for cervical screening using a test for high risk HPV will identify those at risk and prevent more cancers than just examining the cells alone. It is a really positive development that this more effective test will mean that women and people with a cervix, who test negative for HPV, now only need to attend their testing every five years, rather than three.'

If this affects you or others you know, please make sure to share it with them as it's very important information. Stay safe, keep up to date with your smear tests, and never hestitate to see your GP if you are concerned. You can read more about the symptoms of cervical cancer here.