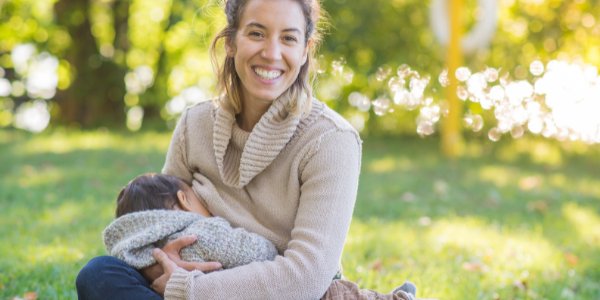 Taking photographs of breastfeeding mummies in public without their consent is to be made a crime in England and Wales!

The fact that it was ever even legal is a whole other debate... but this is a great move that will only serve to make the lives of the breastfeeding mums in our community easier, and added progress in the drive to normalise breastfeeding.

Justice Secretary Dominic Raab has told the press that the move will stop mums from being "pestered, whether it's for self-gratification or for harassment purposes", much to the joy of breastfeeding advocates and campaigners, many of whom have lauded it a 'victory for breastfeeding mothers'. The new law will form part of the the Police, Crime, Sentencing and Courts Bill going through Parliament.

Julia Cooper, a mum based in Manchester, began the campaign to make taking photographs of breastfeeding mumss illegal after her own awful experience in a local park in April 2021. She told the BBC;

"I sat down to breastfeed my daughter and I noticed a man on another bench staring at us. I stared back to let him know that I had clocked his gaze, but undeterred he got out his digital camera, attached a zoom lens and started photographing us."

Julia went on to say that she was 'completely shocked and devastated' by what had happened, but felt even worse after Greater Manchester Police told her that, shockingly, no crime had technically been committed and that there was nothing they could do to help.

"I just felt that was so wrong that we had been violated in this way and there was nothing the police could do to help. I was angry he felt just this right to capture what I was doing. It was disgusting. And I just felt so helpless, so I thought I need to do something about this."

Floored by her experience, Julia then contacted her local Labour MP Jeff Smith as well as his colleague Stella Creasy. Stella's own experience of being photographed in public when breastfeeding her child on a train helped to fuel the campaign to make this illegal, with Stella  telling the BBC it was a 'horrible experience that made me feel so self-conscious'. They took the campaign to the House of Commons and proposed an amendment to the Police, Crime, Sentencing and Courts Bill in June, calling for a change in the law to protect breastfeeding mums and their babies.

The new amendment will make a new criminal offence of "recording images of, or otherwise observing, breastfeeding without consent or a reasonable belief as to consent" and to be found guilty of this crime, the perpetrator "must be acting for the purpose of obtaining sexual gratification or of humiliating, alarming or distressing the victim", covering bases for mums who may be targeted in varying ways. Julia is delighed by the change, and has declared;

'It is a victory for breastfeeding mothers and it will provide the reassurance that we can breastfeed in public without strangers freely photographing and filming us as they wish. The law is on their side, the law is going to protect them and I am so pleased.'

Stella Creasy also welcomed the change, saying it "shows the law needs to keep up with the times, with people having phones and being able to take pictures and share them so easily'.
However, she also said that it shows the importance of having more mums working in Parliament to ensure that we have a voice where it is needed. Stella is also campaigning to bring more mothers into the government, which we think is fantastic!

If you liked this, you should read...