Not a Tiny Baby Anymore…

written by Bump, Baby & You

It’s a big night tonight and despite the positives it will bring I do feel really sad. Tonight I put Molly to bed in her own room for the first time. Last night I knew it was her last night in her little crib next our bed but for some reason it didn’t really dawn on me until tonight how I felt about that.

How did she get to nearly 7 months old already? I haven’t spent a single night apart from her, with her anywhere else but right next to me and I’m already finding it quite hard.

There are so many reasons why this is a good thing. She’s definitely old enough and she has been sleeping through the night for 10 hours since she was 8 weeks old and in a regular bedtime routine since she was 12 weeks old. Molly has also, in the last month, begun to make a croaky complaining noise as she falls asleep and just prior to waking up so hopefully this move will mean more sleep and more restful sleep for me as I can’t wake up at every loud breath, snort or tiny cough that she makes. My Fitbit tells me I only get 5 to 5.5 hours restful sleep a night even though I’m going to bed much earlier! Tom and I can perhaps get our room back in a little more order as well! Poor Tom has had a sliver of free space between the wall and his side of the bed for months and months now and with the crib packed away we can make the bed a bit more central. And we can put clean washing away when she is asleep because now we can turn the light on! (I never thought I’d look forward to housework!)

We start bedtime at 18:30 with Molly in the bouncer in the bathroom while I run the bath and get her towels. I sing her a song while I’m doing that so she knows it’s bath time. Just some stupid nonsense lyrics I made up to the tune Frere Jacques but she does recognise it. She loves bath time as playing in the water has become more and more exciting the more she has been able to do herself. Now I take her out of her bath support and sit her up and keep arms either side of her in case she topples while she plays with (eats mostly) the bath cubes and splashes me. I lie her down too with my arm under  her head so she could be used to her head getting wet and her ears getting water in them for swimming.

After bath time I put on a sleep playlist of music from Harry Potter for getting ready for bed. Then it’s story-time. We used to read That’s Not My Fairy every night as it was the first short story we had and she is very used to putting her hands on the page for me to guide them. Then it’s German lullaby time with a cuddle from me and then into bed with Ewan the Dream Sheep (a best buy if there ever were one!) and a star light. Usually she is asleep in under 5 minutes. (I know some people may slightly resent how easy I’ve had it with Molly and sleep but I’m going to see it as karma for how difficult it was in the first couple of weeks or so after her birth.

Most other people I know moved their babies into to their rooms ages ago. I think I held onto Molly sleeping in our room for longer partly because of her condition and I felt more sensitive to her vulnerability (although she doesn’t feel it) but mostly because I wanted to be certain that her heart was ok. Our most recent cardiology appointment was a bit of a shock to the system as we were told Molly will need heart surgery at some point. I found this very difficult to swallow as it seemed out of the blue as the last appointment they’d said it was very mild and would probably solve itself. I had visions of them cutting into my little baby and found it unbearable that there are some things, like that, that I can’t protect her from. But I can’t hang on to Molly as a tiny baby forever. She’s not a tiny baby any more, she’s desperate to be off and more independent all the time so we decided come October we would begin to move her into her own room.

We’ve played in the cot and the nursery quite often anyway but this week I made a point of putting her down for her naps in there too. What stings is we followed her bedtime routine tonight and I put her to bed in a different room, in a much bigger bed and she’s already asleep as if it’s no different. I should be ecstatic but a part of me wishes it had been a little harder, probably because it’s harder for me and now I have to admit that that part of her life is over and she’s growing up so quickly.

Sleep well little one. Extra snuggles for you tomorrow (but they’re definitely more for me!)

And just because everyone likes a sleepy baby picture; here is a snapshot of Molly’s sleep each month since she was born. 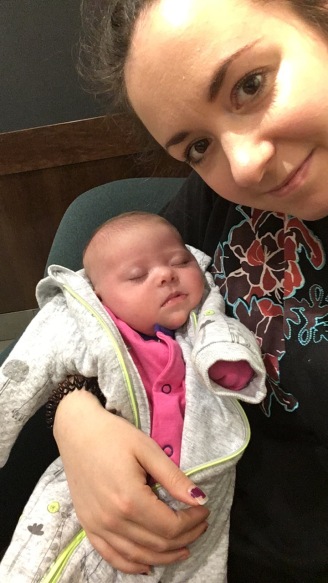 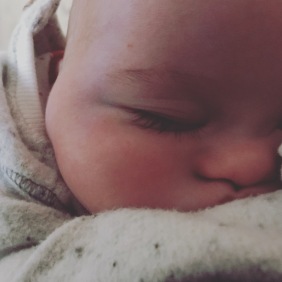 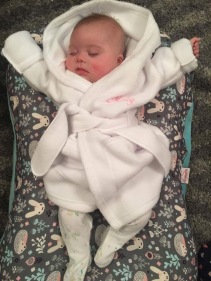 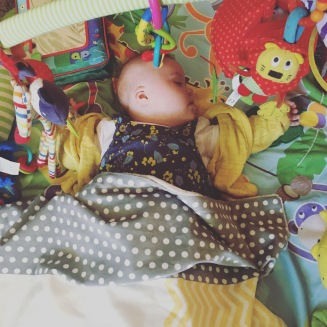 What to Put in Baby and Kids Christmas...

We’re in Love With The Christmas Collection in...

You NEED to See The Christmas Collection in...

Why We LOVE: Pura Baby Wipes