Written by Anna Jane Manvell for her blog, My Meaningful Motherhood.
You can follow her on Instagram here!

To any of you who follow my Instagram you will know that just over a week ago we started potty training. It has now been 10 days and our darling daughter has made it through to the no more nappies side. We are now fully dry throughout the day, however we are yet to tackle the night time!

Knowing when the right time is.

During last summer Isla was showing a lot of interest in where her “wee-wee” was coming from, what happens if she didn’t wear a nappy and what the potty or toilet were for. I honestly thought that she was ready. But later we discovered that it was in fact just curiosity. She really didn’t enjoy that feeling of having accidents without a nappy on, and would ask for a “pappy”, this is what she used to call it, to do her business! She slowly became more aware and quite stressed if we even mentioned using the potty, so we decided to hang up our potty training shoes and not push it.

Our joint decision was to just let it happen when she was ready, after all she was only just two years old. I didn’t want her to feel any pressure. We certainly didn’t want her to become frightened, because let’s face it. After doing your no.1’s and no.2’s in a warm snug nappy, then feeling them just disappear into what must seem like the biggest, scariest looking bucket, must be pretty frightening. And lone behold our decision to just let her decide when she was ready has undoubtably paid off!

At two and a half years old Isla has potty trained herself. She is now fully dry during the day and has been since the day she decided she wanted to use either the potty or toilet.

Over the last month Isla had managed the odd wee or poo in the potty but I really thought that it was all coincidence. They just happened to appear when she was having a sit down on the princess thrown, whilst Hey Duggee was on the television. Never the less we praised her and she was definitely happy to receive either her biscuit or sticker. Our decision still remained the same and we didn’t push her to jump into big girls knickers so we just let it be.

Ten days ago Isla woke up one morning and said she needed a wee-wee. So we took her to the toilet and she did her business. I asked her if she wanted to wear big girls knickers and she said yes! Throughout the day we had a 50% success rate, but when those few accidents happened instead of looking anxious or frightened she took it on her shoulders and knew that she needed to actually go find mummy and ask for some help. The next morning we got straight up and into big girl pants. Today was pre school day. Now seeing as she did so well the previous day, I didn’t want her to relapse in her progress so I took her there with four pairs of everything, and held my fingers crossed!

I collected her at lunch time and we had only one accident, a sneaky poo. But for being there for four hours and having no other accidents I was very impressed and so were pre school! I had taken in our own sticker chart from home, but pre school decided to make their own to make it extra exciting and special, which I agree was a lovely idea.

We left and made our way over to grandmas house which is where we set up camp for what was left of the day. I took our potty from home, left it by grandmas bathroom door and Isla couldn’t get enough of sitting on it. It was hysterical. She wanted to show off to Grandma that she was a big girl, and that she could be like mummy and Grandma. I was gushing with pride watching her taking herself off for a quick wee, or even just to try.

From that day we have had no accidents. She has managed walking into town every day, a bus journey and walking the doggies. She has 100% got the understanding of when she needs to go. We are so incredibly proud. It has really been such a relief that we haven’t had any trouble with the training, which I honestly wouldn’t have been surprised if we had done, because she is a sensitive child. But Isla has taken too it like a duck to water.

Our advice to you.

So for anyone who’s thinking of potty training but they’re little one is still very anxious or just outright refuses to use either potty or toilet, our biggest piece of advise to you is just to leave it. They will tell you when they’re ready, and as a parent you will know. Trust your inner instinct and you will get it right. It’ll only make things far more stressful for yourselves and your child. I don’t doubt that if we had pushed Isla in the summer it would have been an utter disaster. She would have become distressed and confused. But since she’s seen other children at pre school using potties and toilets, and her own level of understanding situations has matured, she has been able to pretty much potty train herself. Daddy and I have just purely been there to wipe her bottom, maybe not even do that sometimes!

The night times are our next step. We shall approach those in a couple of weeks. Her pull ups at night time are generally dry, and she has a big wee in the morning so I have no doubt that she will master night times very quickly.

Proud of our girl. 2.5 and out of nappies, our baby girl is growing up so quick. 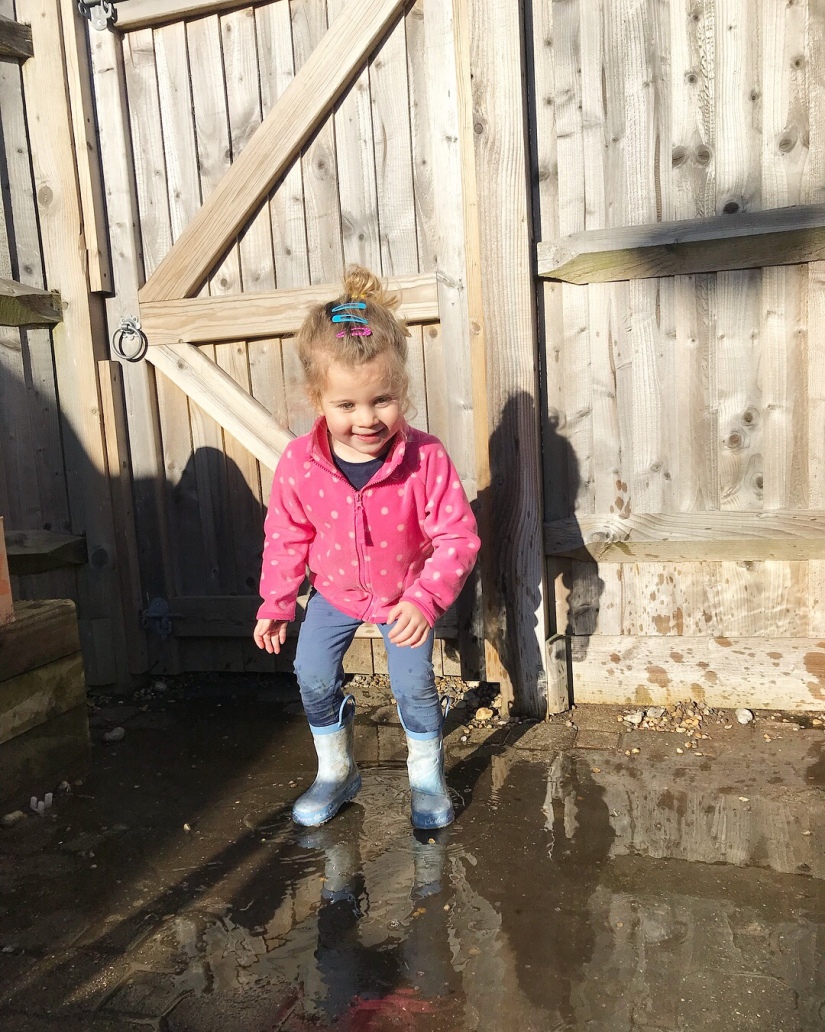 Reflecting On The Early Days – Tips For New Parents

Get Ready For Summer With These Adorable Tee...

We Found The Cutest Sandals In H&M

The Cutest Crib Shoes, ever!

These Gorgeous Dr. Martens Sandals Are A Must-Have!