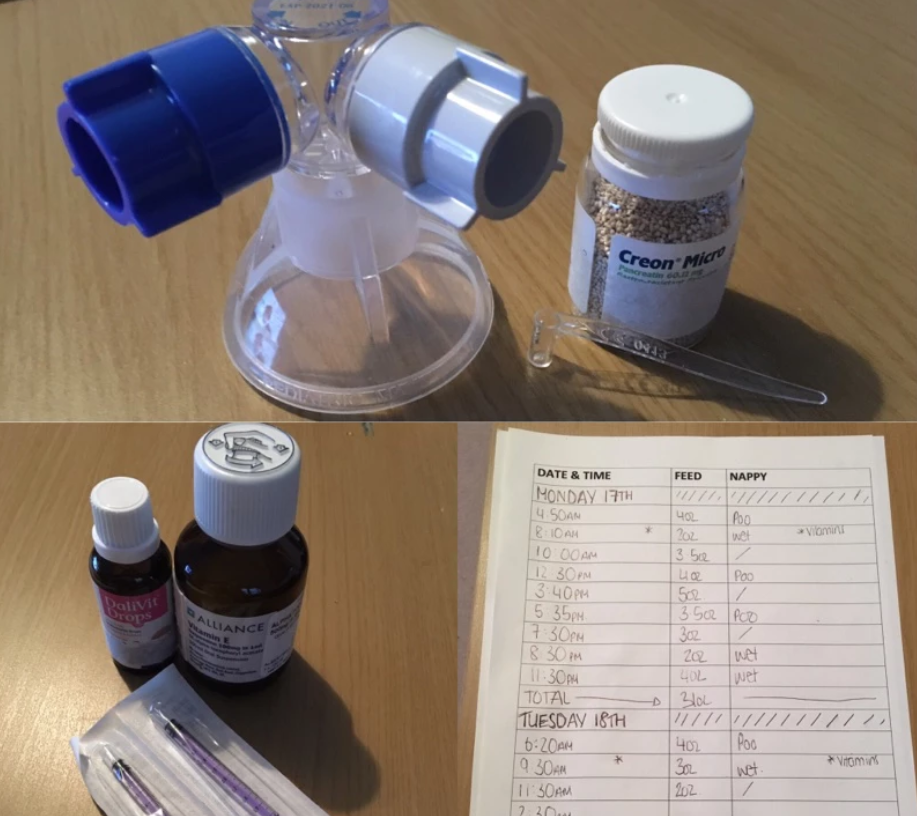 So I thought, seeing as I’ve mentioned about BB’s teeny tiny pot of Creon a few times, I should explain a little about his Cystic Fibrosis, how we found out and what we do each day to prevent his lungs from scarring and to ensure he can live life as normally as possible.

First of all I’ll explain a little bit about CF and what it is and what it effects. It’s an inherited disease that mainly affects the lungs and digestive system, it causes a thick, sticky mucus that clog them and can in turn cause inflammation and infections in the lungs and difficulty with food digestion. This is because the faulty gene that causes CF is supposed to carry water in and out of the cells in the body, but it doesn’t. In the lungs the thin mucus layer that non-CF people have is thicker in people with CF which is where the bacteria and infections get caught therefore creating a higher risk of being ill. A knock on effect of this is that with infections and a lot of coughing and wheezing the walls of the airways can become scarred and thicken which then drops the lung function, making it harder to breathe. Now in the pancreas the same thick mucus causes the tubes that transports the enzymes to be blocked, which means the enzymes become ‘trapped’ in the pancreas and can’t be used to break down the food. People with CF take Creon (or other variants) and will tend to need a higher calorie intake and require more fatty food in their diets. Anyway, that’s kind of a bit more than just the basics, if you want to know a bit more please do visit https://www.cysticfibrosis.org.uk, so let’s move on.

As I said in my introductory blog, The Story Of Country Mumming, he was diagnosed via his 5 day old heel prick test. We received a phone call from the hospital from the specialist consultant one morning about 10 days later, while I was lazing in bed, in my pyjamas and with my hair as greasy as a chip fryer! He explains the basics and I’ll never forget the words: “I’m so sorry to have to tell you this, but your little boy has Cystic Fibrosis.” We didn’t know how to react, the OM went straight to Google (Don’t do that!) and I put the phone down in shock. We took 5 minutes and had a coffee, with me asking “Is it my fault? Did I do something wrong while pregnant?”. With many questions and feelings in mind we got ourselves straightened out and made our way to the hospital to find out more.

We arrived and were introduced to Paul, our consultant, he asked how we were and how we were feeling and went on to explain the genetics behind it all. Me and OM are both carriers, which means at least one of our parents are also carriers and so on down our family tree. He further explains that 50% of my eggs and 50% of OM‘s sperm carry the mutation for CF, the two that met were one of each of the 50% that carried it which is why BB has CF. If one of either my eggs or OM’s sperm that carried the mutation met the other who didn’t carry it BB would of just been a carrier and finally if neither my egg or OM’s sperm that carried the mutation met BB wouldn’t of been a carrier or have CF. So it was a 1 in 4 chance that BB would have CF and out of the whole of the UK it was a 1 in 2500 chance that he would have it, and our little bundle of joy, who we still believe is my only chance at being a mum, went against the odds and had CF. Now to break it down further, it was a 1 in 25 chance that both myself and OM were carriers as neither of us have a history of CF within our family and even more unlikely that we, as two carriers, would meet as only 100,000 people in the whole world have CF!

So, as you can imagine, me and OM were feeling very overwhelmed by all the information we had received. It was explained that BB would have to take Creon before each meal, Creon is an enzyme which, in places like Germany is available to buy over the counter, BB’s pancreas does not produce due to his CF and is needed in order to break down the proteins and fats correctly in his diet. We were prescribed that and 2 days later started administering it before each feed using the small scoop, we started on one scoop per feed and had to monitor his bowel movements. If BB wasn’t getting the correct amount of Creon his stools would be greasy, almost like vegetable oil (sorry for that image!) So we monitored and slowly upped the dose to 2 scoops. As his daily intake of food goes up we will have to continuously monitor his stools and up the dose as necessary. The next thing was Vitamins, due to BB’s pancreas not working quite correctly, even with the Creon, his body may not absorb the vitamins he needs therefore we have to administer two lots every day, 0.5ml of Vitamin E and 0.6ml of a multi vitamin, via small syringes, can you imagine how hard it is to administer these to a newborn?! It’s like wrestling a baby tiger in to a head lock and forcing vegetables in to its mouth! Then, the final thing, is his mask. Every day, at least once but preferably twice, BB has to spend 5 minutes each time with a mask that has a special resister on it over his nose and mouth. This is to help strengthen his lungs and vibrate the lungs to help move any stuck bacteria and rubbish that he can’t move himself. Our little boy has really surprised me with this, we have to hold it on fairly firmly and I’m sure most babies would not be happy about it, but 90% of the time he’s is good as gold and is a pro! Obviously there are moments he creates and gets very upset and that kills me inside, he’s too young to explain to him why we are doing it and his Mummy and Daddy are holding this unknown thing on his face and he’s trying to tell us he doesn’t understand but we have to persist. It’s absolutely heartbreaking!

So we were all set up with everything, we’d been introduced to each member of our specialist team, our specialist CF Nurse who visits us at home and is always a text away if we need anything, our Physio who helps us with the mask, our Dietician to help us with Creon doses, feed intake and bodily fluids and our Consultant. Every single one of them are simply amazing, they are always on hand and answer all our silly questions and musings. We saw them every week for a month to check that BB was putting on weight correctly, that his lungs were clear and that we were still happy with what we were doing. We’ve now dropped to only going in once a fortnight and hopefully in the New Year it’ll be once a month. So far BB is doing fantastically, he’s piling on weight and he is fit and healthy, his immune system seems good as both me and OM had chest infections the first week we came home from hospital and he didn’t catch a thing! It’s hard and most likely will be unpredictable for a while until we get into a routine (We may begin noticing that he’ll pick up infections at particular times of year), but we remind ourselves everyday that everything we are doing is preventative, to ensure that he grows up with the least damage to his body as possible and we won’t let it effect him, he will be able to do everything anyone else can.

Written by Lauren for her blog, Country Mumming.