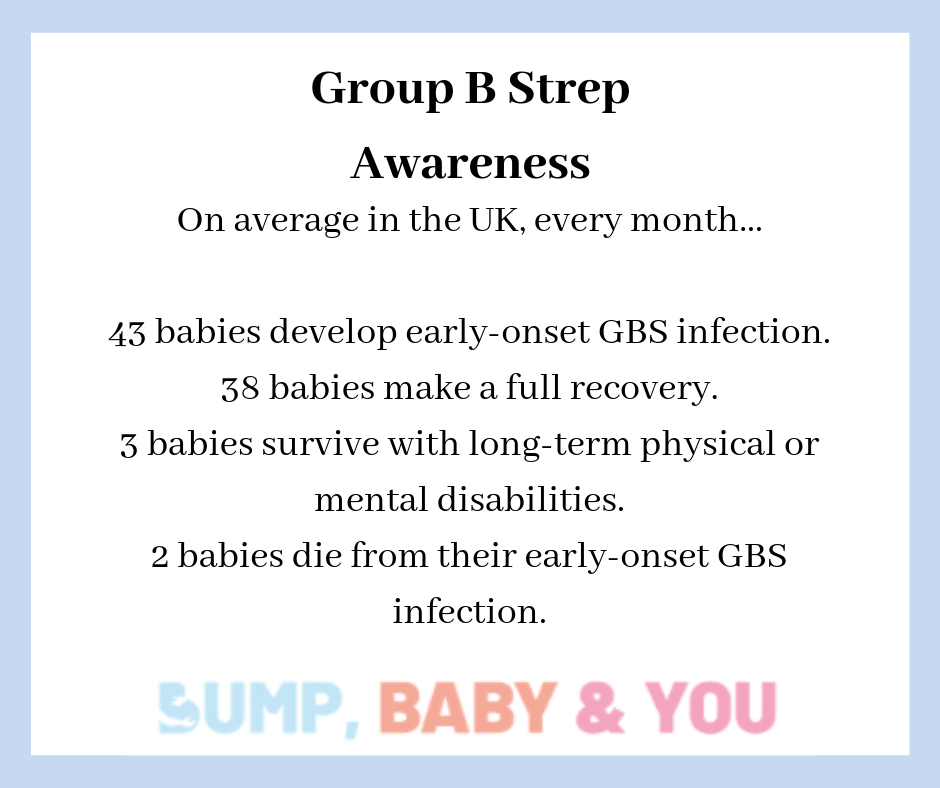 Group B Strep is something that many mummies have been blissfully unaware of, until it has affected them and their baby. It isn’t routinely tested for in the UK, and it can have horrendous complications if your baby contracts it during labour, which is why here at Bump, Baby & You, we passionately support awareness raising!

What is Group B Strep?

Group B Streptococcus (GBS) is a normal bacteria carried by 20-40% of adult males and females, usually in the gut, and for up to 25% of women in the vagina. There are usually no symptoms or side effects of carrying GBS, and it is not a sexually transmitted disease.

Around 150,000 pregnant women in the UK each year will carry GBS during their pregnancies, which will pass to some babies during labour. Often, this causes no issues, but for some babies it can be very dangerous.

Around 1 baby in 1750 in the UK and Ireland is diagnosed with early onset GBS. This can lead to sepsis, pneumonia, and meningitis.

What is the aim of this awareness month?

“July’s Group B Strep Awareness Month is a great opportunity to improve awareness of group B Strep. Too many people don’t know about group B Strep, yet it’s the most common cause of serious infection in newborn babies in the UK.

On average, two babies a day develop group B Strep infection, and 62 babies will do so during July. We are grateful to organisations like Bump, Baby & You for highlighting this important issue.

For more information about group B Strep, please visit our website at www.gbss.org.uk”.

The GBSS organisation aims to;

“While we believe this would prevent more GBS infection, disability and death in newborn babies, it is the UK National Screening Committee’s responsibility to recommend for or against screening. Sadly, despite most developed countries using the screening approach to GBS prevention and seeing major reductions, the UK NSC has rejected international evidence. Their next planned review is 2019/20.” GBSS

Why isn’t it routinely tested for in the UK?

As GBSS stated above, the UK National Screening Committee has decided against standard screening. Why is this?

The current testing most commonly available is deemed inaccurate by the UK NSC, as it can show positive and negative at different stages of the pregnancy. More accurate testing such as the ECM (Enriched Culture Medium) aren’t yet widely available within the NHS. However, some argue that in the instance of even a single positive reading at one point, antibiotics during labour should be offered to mitigate any risk. The UK NSC sees this as as problematic however, stating that the current screening could lead to many women being given unnecessary antibiotics during labour.

“At the moment there is no test that can distinguish between women whose babies would be affected by GBS at birth and those who would not. This means that screening for GBS in pregnancy would lead to many thousands of women receiving antibiotics in labour when there is no benefit for them or their babies and the harms this may cause are unknown.

This approach also cuts against the grain of ongoing efforts to reduce the number of people receiving unnecessary antibiotics. Much better evidence is needed on such widespread antibiotic use among pregnant women and whether it is possible to find a more accurate test.”

I tested positive; what will happen?

Sometimes, there may be an instance where you are swabbed for other issues, and GBS is detected. In this case, the current UK guidance dictates that you should be offered intravenous antibiotics from the start of your labour.

Where can I buy a home testing kit?

You can buy a home ECM (Enriched Culture Medium) testing kit to do at home. These kits are approved by the UK Standard For Microbiology Investigations B58.

You can buy a home kit here!

It’s worth asking your booking hospital first before paying for a test – since 2017, The Royal College of Obstetricians and Gynecologists has reccomended that selected women are offered the ECM test for free, so you could ask for it. Many maternity units still use a less sensitive test that can miss half of GBS cases, so it’s worth reading this and looking into your testing options.

Our guest blogger Hayley has shared her story with us here. She is a vocal advocate of getting testing routinely offered to expectant mummies, which we wholeheartedly support. You can sign the current petition here.

If you’re a parent who has been affected by Group B Strep, and would like to share your story with us and our followers, we’d love to hear from you. For more info, email [email protected]

Love from Katie and GBSS.org. Xx