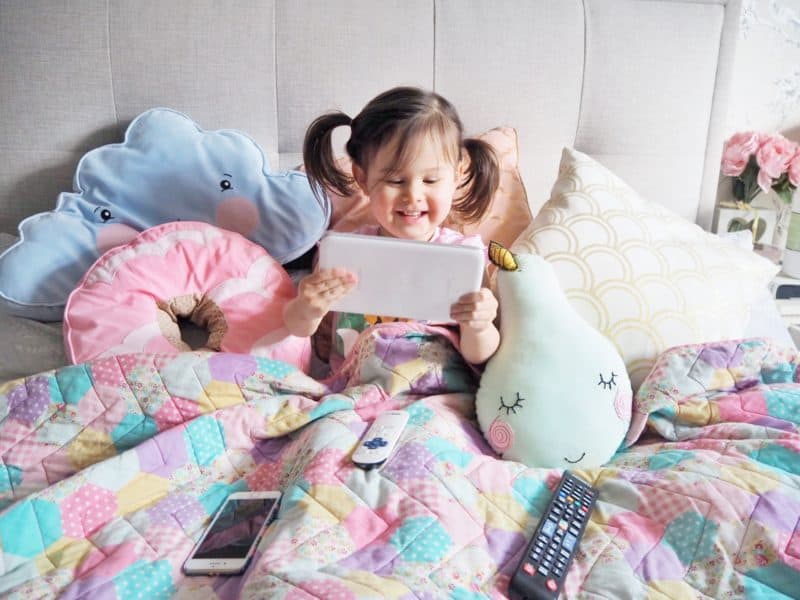 How To Reduce Your Child's Screen Time

Written by Kate Mai-Lyn for her blog, Ever After With Kids.

Let me start by saying that I am in no way against screen time.

I couldn’t survive without being able to put a movie on for the kids so I can put the laundry away, or letting them play a game on my phone to keep them quiet while we eat our food in a restaurant. For me, someone who has zero help with childcare on a day to day basis… screen time is my emergency babysitter.

I also believe it can be really beneficial for children to watch movies and play computer games sometimes. My daughter’s imagination explodes whenever she watches a new movie, and some of the games she plays on my phone have really helped develop her counting and problem solving skills.
Used correctly, screen time can be a fantastic tool for educating and entertaining your children.
But what happens when the kids start to prefer screen time to all other activities? And what do you do when your child wants to watch television or play on your phone or tablet constantly?
As parents we all know instinctively that excessive screen time is bad for kids, so what can we do to gain control over it and ultimately cut it down?

Monitor what is being watched

With services like Netflix and Youtube being the norm now our kids have access to an array of content like never before. I remember when I was a kid there were only four television channels and children’s shows were only on for about two hours a day…you didn’t get much choice what you watched…what was on was what was on.

But now there are so many thousands of movies and shows available it is mind boggling. Make sure you know what your children are watching, make sure it is age appropriate and suitable.

This is especially important online. So many parents allow their children to freely watch Youtube videos without vetting them first. I don’t allow my kids to watch Youtube full stop after some questionable videos started auto-playing whilst my daughter was watching nursery rhymes and made me feel really uncomfortable. (You can download apps that filter videos so that only age appropriate content can be viewed but I have decided to cut it out completely at this point.)

Choose educational games for your phone or tablet

Make the time your children do spend playing computer games count. Try to choose games that teach skills or require some mental effort, learning to spell for example.

If I didn’t have a security code on my phone or on the tablet my children would be on them any time my back is turned. This way they have to ask my permission. You can also keep remote controls for the television up high out of reach.

Your kids are unlikely to take you seriously if you yourself are constantly on your phone or tablet, or watch television for hours and hours each day. Remember that old saying, children don’t learn what you tell them, they learn what you are. Show them you mean business by cutting down your own screen time.

I like to record my children’s favourite shows or have their favourite movies on DVD so that when they end they end. One problem I find with Netflix and kid’s TV channels is that they just go on and on indefinitely. With recordings and DVDs they come to a natural end. I find this helps young children to accept screen time is over.

I used to have all my kid’s toys out at all times so they could play with whatever they wanted whenever they wanted. However, rather than this creating an amazing environment for play I found it meant the kids got bored of their toys really quickly. They saw them all constantly so they sought novelty from the TV or tablet instead.

Pack away two thirds of your kids toys in to boxes or bags and store them out of reach. Then every week or so, bring out some of the stored toys and pack away the ones you left out. This creates a constant sense of novelty and means your kids are much less likely to get bored of their toys.

Have a go to set of activities ready for when your child is bored and moaning for screen time. We have things like play-doh, magic sand and baking kits that we only get out occasionally which the kids see as special and exciting.

I love nothing more than watching out of the corner of my eye my daughter playing with her figurines in her dolls house, chattering on about the wild adventures they are having in space or dinosaur hunting. Once she gets going, she can be lost in her own little world for hours. But sometimes she needs a little help to get there, so I try to start off her games by setting up a scene with her toys and action figures and giving her some ideas about what might happen next. Also, showing children how to stretch their imagination. Show them how a laundry basket can be a boat or how the under the dining table can be a secret cave.

Have a strong routine and phase long periods of screen time out of it. Children like to know what they are doing and when, if they have a schedule that is stuck to which doesn’t include screen time except for one hour late afternoon, etc, they will stop expecting it. Make limited screen time the norm.

If you have decided on no screen time at a particular time, or it is time to switch off and you are meeting with resistance – stick to your guns. Kids are kids, they will probably protest and throw a tantrum, but don’t give in or they will learn that behaving this way works and gets them what they want. It’s hard but you are doing this for their well-being so suffering through it until they become used to it will be completely worth it.

Acknowledge when the kids have behaved well and switched off the TV without protest. Tell them you are proud and happy. Reward them with some one on one time and extra attention. Read a book or do some drawing together, make the end of screen time a positive time.

child screen time technology phone tablet remote tv parentingPin this image on Pinterest
As I said before, I don’t believe that screen time is the devil. I do think however that it can very easily become a huge part of a child’s life if left unchecked. I’m a firm believer in ‘all things in moderation’ and screen time is no exception. Setting boundaries allows for children to develop interests and skills you just cannot gain from television or video games.

Children need a wide range of experiences and skills to become well rounded people, too much of anything would inhibit that. Hopefully, these tips will help to effectively reduce screen time in your home and make room for other kinds of fun!