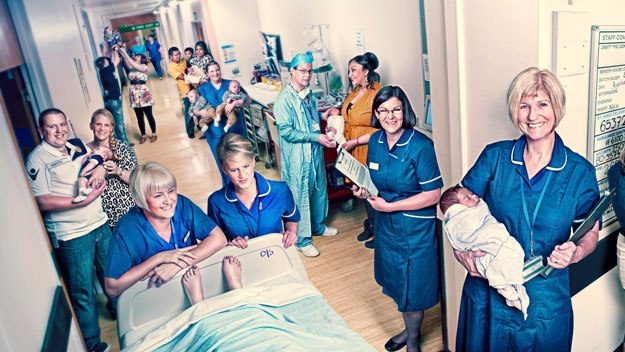 My One Born Every Minute Experience

Have you ever done something without giving it much thought, because the thought of it actually happening is near to impossible to imagine? Well, that’s sort of how my experience started. I was scrolling through Facebook with a cuppa resting on my big fat baby bump when a notification popped up, a friend had mentioned me on a comment on a post asking if mummy’s due between November and December might be interested in featuring on a TV show called One Born Every Minute.

I had watched the show throughout my pregnancy on catch up, I found it very helpful and informative. With a laugh I imagined how funny it would be to be on the show myself and submitted my details. That was the last thought I had on it, they probably had thousands of applicants and why would they take an interest in me? I wasn’t anything interesting, I wasn’t carrying twins or triplets, my pregnancy was your basic straight forward pregnancy nothing unique about it.

So I went about my week like normal. Towards the end of the week I noticed they had responded, clicking it I was almost sure it would say that I was unsuccessful but much to my surprise they asked for my number to call me and do a telephone interview! Nervously I agreed and waited for the call. We were on the phone for over an hour! They were asking me about how I met my partner Nick, if the baby was planned or not, basically getting to know the ins and outs of our relationship and pregnancy. At the end of the phone call they informed me they would like us to be on the show!

When Nick got home from work that evening I couldn’t wait to tell him, as soon as he walked to the door I excitedly chatted away about all the questions and the fact they wanted us on the show! Nicks blank expression made it evident that he wasn’t sure about it. He explained that it was an amazing opportunity however he felt as if the birth of our first born should be an intimate moment between us and not the rest of the world. I won’t lie I was very disappointed, but how could I go against his wishes? This was as much his baby as it was mine. So the next day I called the one born team and explained what had gone on, they asked if they could speak to Nick, after Nick agreed I passed the phone to him. Finally we all came to an arrangement that we would go ahead with filming as before the episode is aired they come and show us our story and we have the chance then to back out, where as if we said no now and then changed our mind later on it would be too late.

A few weeks went by and eventually the One Born team contacted us to ask for a date to come out to do our home interviews, a week later they came out and filmed us, they asked us very in depth questions similar to the ones from the telephone interview, I was extremely nervous and kept stuttering. Nick was a pro, he cracked a few winning jokes and chatted away.

So that was it, the next time we would take the next step in our one born journey was when I was at the hospital having our little boy. Fast forward to that day! Between the interview and the big day our midwife had insisted we change our hospital from Liverpool women’s to Whiston, and she waited until the very last moment to tell us which only added to the stress. We informed the one born team with great disappointment however they promised to keep us on record in case of the off chance things change. An entire day of contractions and my sister in law finally suggested we phoned the maternity ward, I rang Whiston to explain the situation, the lady on the phone explained that there were no beds and suggested that I come in and they would give me a shot to stop my labour, I was furious! I was full term and baby was ready to come now. I didn’t even bother to reply I just hung up the phone and called our One born team! They saved the day! They sent us out a taxi they had paid for and brought us to the hospital where we were escorted to our private room! There were hidden cameras everywhere!

The midwife came in and assessed me, she suggested that I go home for the night as I was only 3cm dilated. Reluctantly I agreed, I was in agony but it wasn’t enough to stop my excitement and I was disappointed to be sent home without a baby.

That night was the most painful night of my life, I spent the majority of it in a warm bath as that seemed to ease my pain a little. Around 10am we headed back to the hospital as it was clear to see I needed some pain relief as I was struggling to cope. Again One born send us out a taxi and we headed to the hospital and to our private room! The midwife checked me and I was 5cm dilated. Around 7 hours later my baby boy Isaac Robb Shirley was born weighing 7lbs.

I can honestly say I am 100% glad that we went through with One Born Every Minute, the team were all so lovely and accommodating, they sorted our transport to and from the hospital out and even arranged transport for my partner to come visit the next day. A few months after they had filmed they came out with the DVD for us to watch. It was strange seeing myself on TV and even stranger watching myself give birth but towards the end of the DVD I felt rather tearful and emotional, they captured the laughs (provided by Nick) and the magic of bringing a new life into the world. There was nothing on there I was overly embarrassed about ( maybe my push face but there was no way I could look glamorous pushing a baby out.) Nick gave the thumbs up for it to be aired and although we were not allowed to keep the DVD they have promised us that as soon as our episode has been on TV we would get it sent to us in the post as a keepsake. We are so fortunate and lucky to of had this opportunity and now we will have the video to look back on.

So a massive thank you to our One Born team and a huge thank you to Bump Baby & You for giving me the opportunity to tell you about this wonderful experience!
And a thank you to you for reading
Holly xx
birth storybloggerLabourmummy bloggerone born ever minute
Tags
Birth StoryBloggerMummy BloggerOne Born Ever Minute