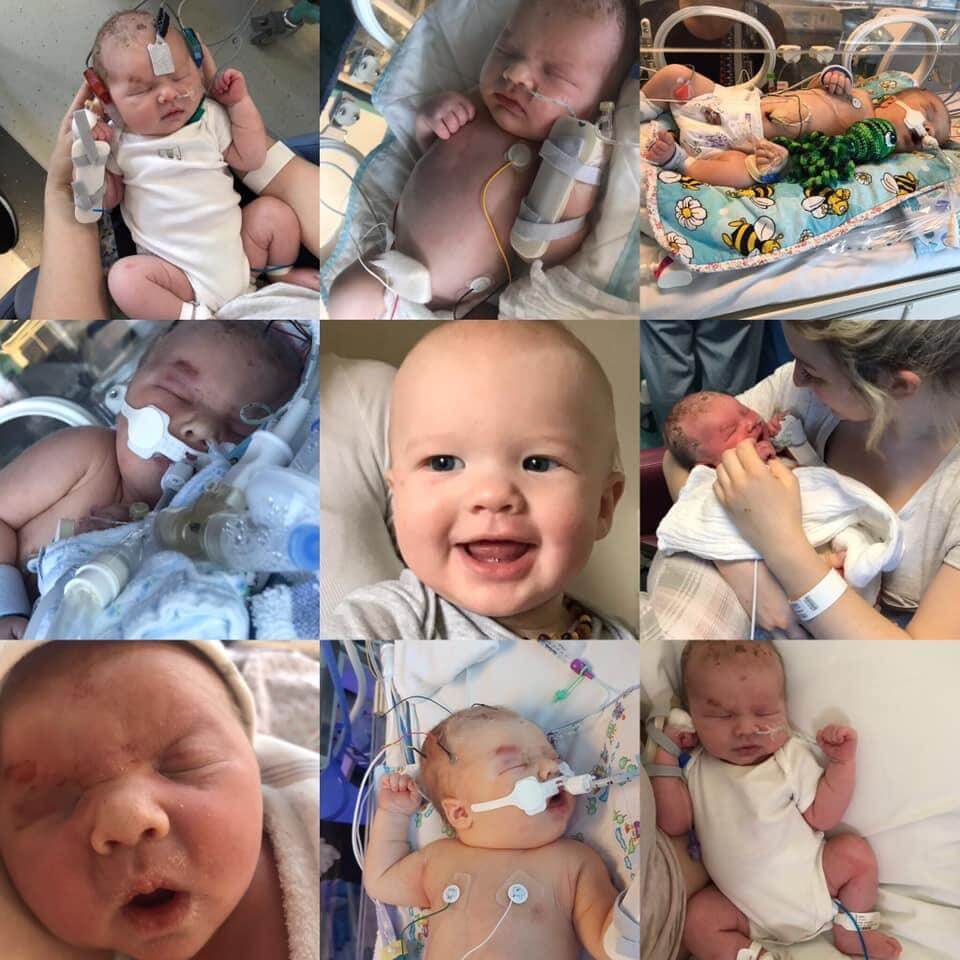 Sarah Smith and fiancé Richard Townsend from Sandhurst in Berkshire are calling for all expectant parents to be better informed about Group B Strep, which almost killed their newborn son, Joshua.

Group B Strep is the UK’s most common cause of severe infection in newborn babies, causing sepsis, pneumonia, and meningitis.

Joshua Smith was born on 12 April 2018 at 40 weeks at Frimley Park Hospital, and at first everything seemed fine. However, three hours later, Joshua was desperately ill with uncontrollable crying, fast breathing as well as making a strange grunting noise.

At 18 hours old, Joshua stopped breathing and started having seizures. He was rushed to the neonatal unit where his seizures continued and he ended up being heavily sedated and ventilated. Joshua was then transferred to Ashford and St Peters Hospital in Chertsey, which had a higher level neonatal intensive care unit (NICU).

Sarah Smith said: “By this point I could barely stand and was cold and shaky so they wouldn’t let me go with Joshua. Group B Strep was mentioned for the first time and bloods and swabs were taken from me.  We were told they suspected Joshua might have it too and he could have caught it from me. Richard and I hadn’t slept for 36 hours and we were in such an emotional mess that we couldn’t take in what the doctor was trying to say to us. All I could say was, “please can you tell me if my baby is going to be okay?”. He told me he couldn’t answer that and that memory still haunts me now. No mother should have to hear this.”

Joshua spent just over 2 weeks in NICU, where he had to undergo a multitude of tests including a lumbar puncture, MRI scans and blood tests.

Before Joshua was born, Sarah had asked her midwife about group B Strep, but it was, “brushed aside” and she was told not to worry about it. “She told me where I could find further information out,” said Sarah Smith, “but because she was so blasé I didn’t think to search any further into it myself.”

The UK does not routinely test all pregnant women for group B Strep, unlike the United States, Canada, Germany, France, Spain and many other developed countries. Each week in the UK, one baby dies and another is left with a long-term disability, like cerebral palsy or hearing or vision loss, as a result of group B Strep infection. The bacteria can be passed unknowingly from a mother to her baby around birth.

Sarah Smith said, “I would urge all mothers-to-be to get tested for group B Strep or at least read up about it. I’m working with my local hospital now to ensure that leaflets are given to pregnant women and their families. What happened to Joshua will never leave me. My anxiety about him is so high and I still have flashbacks of that first day. Thankfully though, Joshua seems completely unscathed. We were warned that he could be delayed in his development but if anything he is advanced. He could roll both ways at 11 weeks, crawl at 5 ½ months and walk by 10 months. We are so lucky but not everyone is as lucky as us.”

Jane Plumb MBE, founder and Chief Executive of charity Group B Strep Support, said: “We’re so sorry to hear about the terrible experience that Sarah, Richard and baby Joshua endured.  Most group B Strep infections show in the first 12 hours after birth and typical signs include the baby being floppy and fretful with a high pitched or whimpering cry, or moaning with a blank, staring or trance-like expression and a tense or bulging fontanelle (the soft spot on babies’ heads).

“The UK’s rate of early-onset group B Strep infection in infants is double that of other high-income countries* and shows that our prevention strategy is not working. Until the UK adopts a better policy, it’s essential that we educate new and expectant parents about group B Strep so they can make informed choices about their care.”

Since 2017 the Royal College of Obstetricians and Gynaecologists has recommended that all pregnant women should be provided with a leaflet on group B Strep during pregnancy. (This leaflet can be downloaded from the Group B Strep Support charity’s website).

You can read more about Group B Strep on the NHS website HERE.

Key facts about group B Strep

• Group B Streptococcus (also known as group B Strep, GBS or Strep B) is the most common cause of life-threatening infection in newborn babies.

• It causes a range of serious infections including sepsis, pneumonia and meningitis – it is the most common cause of severe infection in newborn babies and of meningitis in babies under 3 months of age.

• If left untreated, a GBS infection can kill a newborn baby within hours.

• Most GBS infections in newborn babies can be prevented by testing during pregnancy and providing intravenous antibiotics during labour to women whose test results are positive.

• The UK does not routinely test for GBS, unlike the United States, Canada, Germany, France and Spain.

What is group B Strep?

• GBS is a bacterium carried by many adults, commonly in the gut or in the vagina. ‘Carriage’ is not an infection or illness, rarely causes any symptoms, and does not need to be treated. Carriage should therefore be regarded as ‘normal’.

• It can cause infection in newborn babies when the bacteria are transmitted to the baby around labour (in very rare cases, it can also cause infection in adults whose immune system is depressed, either through old age, other illnesses, or medical therapy).

Testing for group B Strep carriage

• Pregnant women can take a simple, safe test for group B Strep between 35 and 37 weeks.

• The most effective test for group B strep is an enriched culture medium test (ECM test) and is available from several home testing services and private clinics (see www.gbss.org.uk/test).

• Although at present the NHS does not routinely test all pregnant women for group B Strep carriage, in late 2017 the Royal College of Obstetricians and Gynaecologists updated their guidance and recommended that women who tested positive in their previous pregnancy should be offered testing specifically for GBS, using the ECM test, in their next pregnancy. As a result, the ECM test is increasingly becoming available in NHS hospitals.

• The ECM test is highly sensitive – it will detect almost twice as many women carrying GBS than the all-purpose swab test used in the NHS to investigate vaginal discharge.

• Most GBS infections in newborn babies could be prevented by identifying carriers during pregnancy and offering them intravenous antibiotics during labour.

• Giving women antibiotics (usually penicillin) in labour reduces the risk of a baby developing a group B Strep infection by up to 90%.

• The UK does not routinely offer antenatal testing for group B Strep, unlike most high-income countries, including the United States, Canada, Germany, France and Spain.

• Currently in the UK health professionals consider a range of risk factors to determine whether a woman should be offered antibiotics in labour, rather than testing for the presence of GBS. Latest RCOG guidelines are at https://obgyn.onlinelibrary.wiley.com/doi/full/10.1111/1471-0528.14821.

• The rate of early-onset GBS infection in newborn babies in the UK is currently two and half times (2.5x) that of the United States. The rate in the United States dropped by over 80% following the introduction of routine testing.

• If the rate was reduced in the UK in the same way, we could prevent GBS infection in approximately 350 babies every year, saving 15 babies’ lives and protecting another 15 from life-changing disability.

• Depending on where she lives, a woman may not have access to the right kind of test (an ECM test) or be offered antibiotics in labour- it’s a postcode lottery. Group B Strep Support campaigns to change this and to introduce a proper testing regime in the UK.

Who are Group B Strep Support?

• Group B Strep Support is a national charity, working to stop GBS infection in babies.

• Set up in 1996 by Jane Plumb after her newborn son, Theo, died from GBS infection aged 17 hours. We work with families affected by GBS and campaign for a proper testing regime to be introduced in the UK.

The GBSS website offers information about GBS infections, testing and treatment. All information is approved by an expert medical advisory panel.

If you need support or information on Group B Strep you can contact the GBSS helpline:

Do you have a Group B Strep Story you would like to share with us? Please comment and let us know if you do or email [email protected]