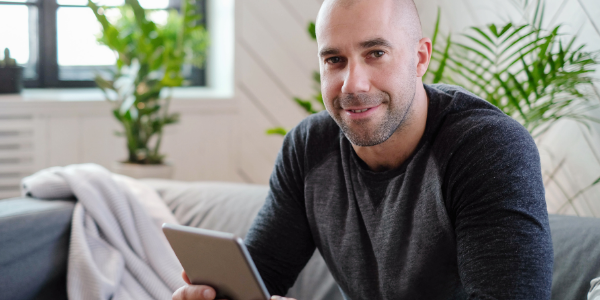 A man from Whitley Bay was overwhelmed with emotion this weekend when he was granted the Freedom of the City of Newcastle.

The 40 year old father was given the accolade because of an  act of extreme unselfishness one Saturday evening in August 2021, when he agreed to babysit his own kids. Our roving reporter Hope Springs-Eternal was at the ceremony and brings us all the details.

Ron Hews was honoured with the award in a glitzy ceremony held in a swanky Quayside hotel and when he stepped onto the stage to collect his award he gave a powerful speech that appealed to fathers everywhere. Clutching his trophy and with tears in his eyes Mr Hews addressed the enthralled audience:

“I am just an ordinary man. I don’t claim to be anything special. But on the night of August 28th 2021, I stepped up to the plate. My wife, she approached me, and she just came out with it: Ron, she said, the girls from work are going to Bongo’s Bingo and there’s a spare ticket. I knew then and there she wasn’t meaning the ticket was for me… It was like a horror film if I’m honest. Time slowed down, I felt hot, cold, shaky, all at the same time. A voice came out of me that I barely recognised, but at the same time I knew it was my own… I’ll do it I said, I’ll babysit the kids.”

At this point the room erupted in the loudest applause of the evening. Quite something when you consider the other recipients of the awards that night were a Firefighter who had saved a family of five from a burning building, and a teacher who had set up her own breakfast club for socio-economically disadvantaged children.

Mr Hews was carried out of the venue on the shoulders of the local mayor to chants of Hero! Hero! There were unconfirmed reports that his wife Mrs Hews had to be removed from the hotel in handcuffs after heckling her husbands speech and screaming repeatedly “It’s not babysitting if they’re your own bastard kids.”