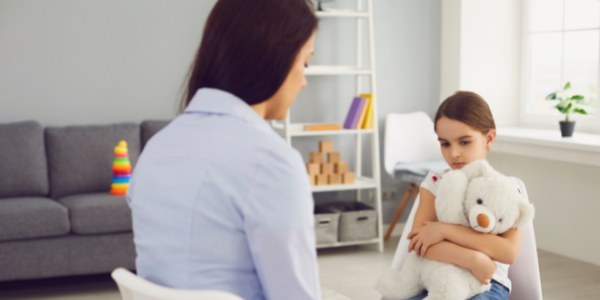 Data from the BBC has shown that there has been a 77% rise in the number of children needing specialist intervention for severe mental health concerns.

Between April and October 2021, around 409,347 children under the age of 18 were referred to the NHS in England in need of specialist care for mental health issues such as suicidal thoughts and self harm. There have also been reports from head teachers that there has been a huge rise in less severe mental health issues in school aged children. To tackle the crisis, the government plans to instate 400 mental health teams intended to support schools by 2023, which we think is a smart move.

The Royal College of Psychiatrists analysed the NHS Digital referrals data for the BBC. This data includes the most urgent cases of mental health crisis where the child is in immediate danger due to an eating disorder, self-harm or suicidal thoughts. Compated to the same six month period in 2019, there were 230,591 referrals, almost half the figure from the 2021 data which has caused concern amongst professional bodies.

By the end of October 2021, a record breaking 349,449 under 18's were involved/under observation by the NHS child and adolescent psychiatric teams, but only those at the most urgent level of need were referred onwards to specialists. With schools reporting a huge surge in cases where pupils don't meet the threshold for a specialst referral but still in desperate need of extra support, teachers and heads are calling for more support. 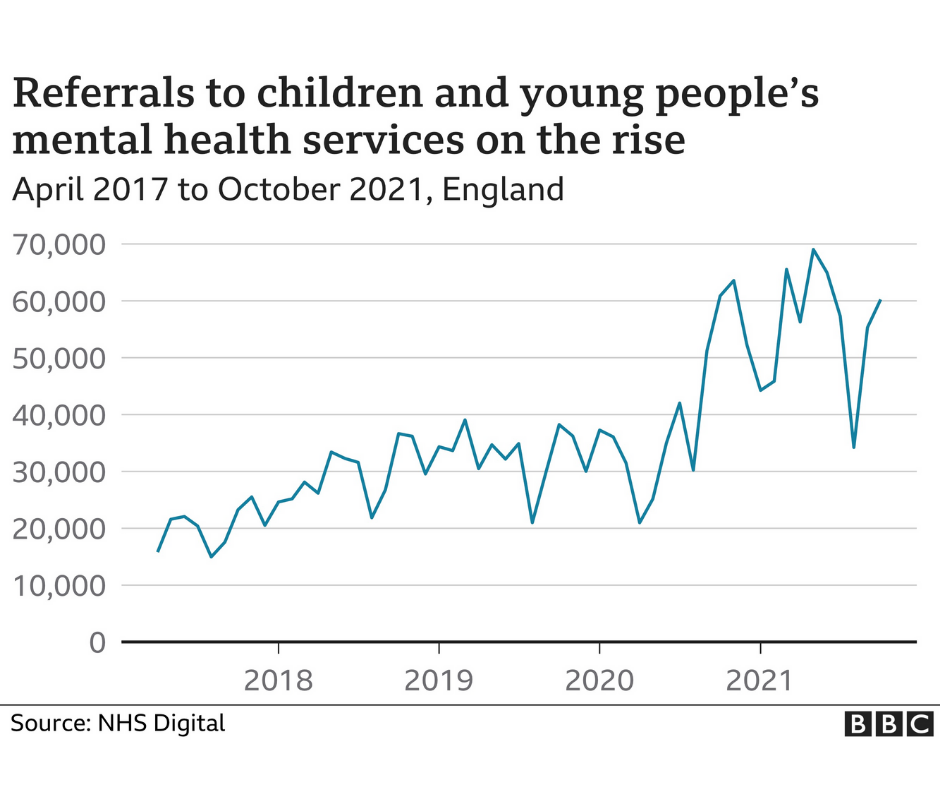 A survey undertaken by the children's mental health charity Place2Be and the National Association of Head Teachers, looked at responses by around 1000 teachers and other educational staff. The responses to the survey showed that the majority of participants have noticed an increase in emotional and mental health issues amongst their pupils since the start of the Covid-19, pandemic, with anxiety and depression being rife. 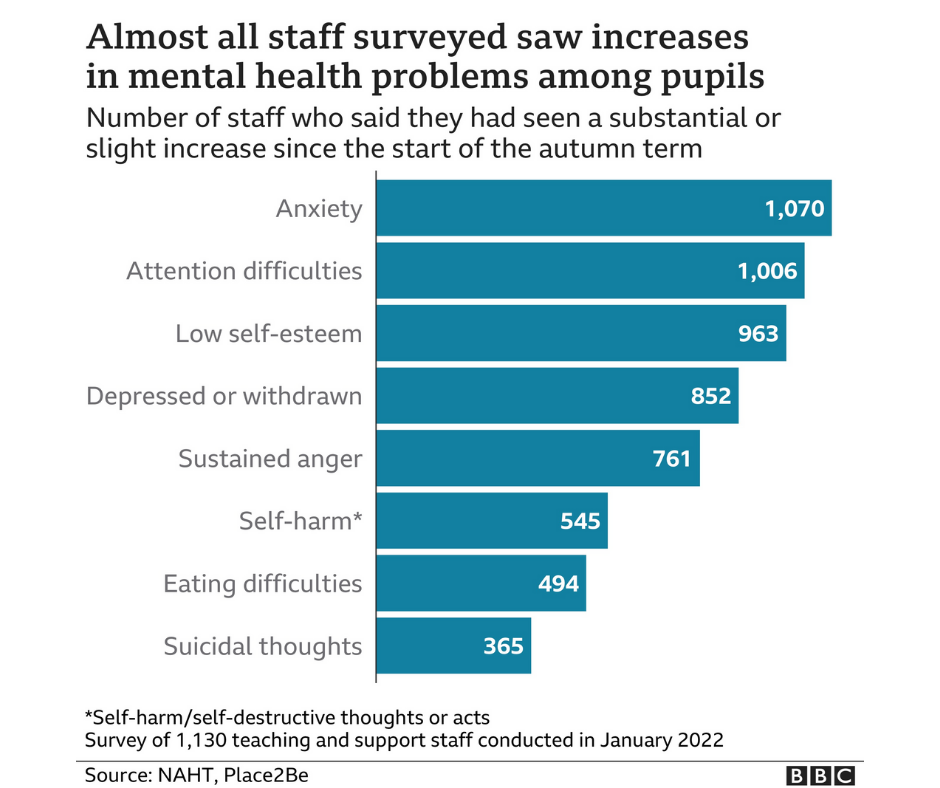 The BBC spoke to some Seascape Primary School pupils about how their mental health has fared with the pandemic...

7 year old Isaac told the BBC that "Covid is trash" whilst showing a drawing of flies buzzing around a bin on fire. He says that he feels 'trapped in the telly', and shared that his grandmother tries to 'scare Covid away' for him. His drawing was part of a mental health workshop that his school was doing. 8 year old Grace drew herself in curled up in the corner of a prison cell, because she feels 'trapped in lockdown'. Uusually, counsellors at Seascape Primary School see around 100 children a year but in the autumn term alone, they saw almost that many, which shows just how much of an impact the pandemic has had on the mental health of children.

Seascape School, as well as holding mental health workshops, is doing other things in an attempt to boost mental health of pupils, such as bringing back music lessons, holding football tournaments and fun trips out. 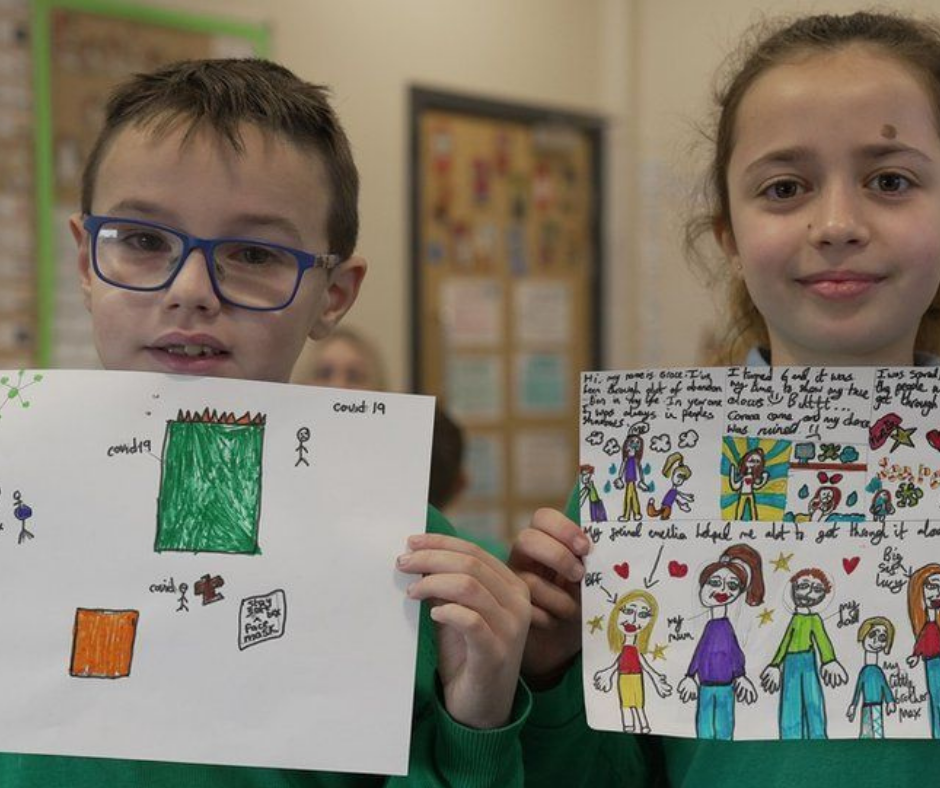 Secondary school pupils are also under immense mental health pressure due to the pandemic.

Those of you with teenagers might have noticed that they're struggling too, in different ways, particularly those with GCSE's this summer. Almost half of secondary schools have stated that pupils' mental and emotional health was the biggest hurdle in supporting them in catching up with learning before exams. The English government has committed an additional £79 million towards mental health support, and as previously mentioned, promised 400 new mental health teams for schools by 2023 to ensure there is more capacity for counselling. 183 are already up and running with staff in training, which is excellent news.

Whilst the new mental health teams have been praised and welcomed, charities in the Children and Young People's Mental Health Coalition have warned that these teams will only cover about a third of England's school pupils! In the meantime, pupils who are struggling are having to rely on what their school can currently provide, with many pupils having really positive feedback about the support their teachers and other support staff are providing, which is excellent news.