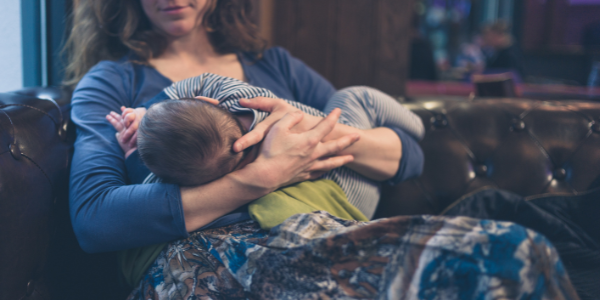 One of the most annoying things that breastfeeding mums could be told is to 'cover up'.

After all, we don't expect adults to cover their heads when eating, right? Generally speaking, when breastfeeding, baby's head 'blocks' out anything that pearl clutchers could possibly take offence to, and it's also worth noting that putting a blanket over a feeding baby could cause problems depending on the situation; overheating, discomfort to baby, hard for mum to view latch etc. The list goes on; fundamentally, if you prefer to cover up when breastfeeding, that is your prerogative and no one has the right to make you feel pressured.

One mum took to Reddit to share her wickedly hilarious reaction to being told to cover up at the dinner table...

"My wife and I had our second baby two months ago (nine weeks) and as with our first I am breastfeeding. The first time round my family were meh about me nursing. I was much more conservative and covered up, until we had a dangerous situation where my daughter overheated and breathed milk in. Very scary, she's fine now, though.

Anyway, this time around I have warded off all types of covers. I am boob free and my daughter has a much easier time nursing. My family formula feed, so this is all new for them.

My brother in law is less happy with my recent confidence. We all got invited out for my dads birthday dinner, and obviously I took my little ones with me. While there my baby got hungry and I fed her, as one does. Afterwards my BIL mentioned how "things like that" make him uncomfortable, and asked if I'd cover up if baby nursed while eating. I told him no, and we ordered.

Food got there and she got hungry again, so I popped a lady out to feed her, yknow. He made another comment about not wanting to see a boob while he was eating. I was pretty annoyed and so I apologised with a smile and said something along the lines of, "Sorry, I'll just get this covered for you," and flung the blanket I had on my lap over his head.

I'm still proud of myself for managing it tbh. Even if it was an asshole move, it was a damn good throw.

A few people outside our family started laughing, and in his flurry to get it off, dropped it into his meal and had to reorder, so we all ate while he had to wait for his food again.

I made things pretty tense, but no one mentioned it again. Afterwards my dad told me I was immature and he wouldnt be inviting me to a family meal again if that was how I was going to act.

Following that everyone is upset, some even going as far as to call me a bad mother because I was petty. I personally am not super sure I was in the wrong, as my wife nor anyone we've told thinks so, but they all tend to be quite nice to me post baby due to hormones. I also cant tell if its my hormones making me feel like a shitty person.

Obviously I feel bad about making him wait for his food, but that wasnt directly my fault? He was pretty humiliated with people laughing at him as well, but I do kind of feel it was deserved.

Mummy was voted NTA - not the asshole - by thousands of voters on the Reddit board, with many jumping to her defence to maintain her right to feed her baby without that right being infringed for trivial reasons. Our favourite comment by far was...

Not the asshole, without a doubt. This is the point-making scenario that many breastfeeding mums would absolutely emulate in the same situation; there are plenty of memes of similar yet figurative situations on social media, so it's deliciously satisfying to see this played out for real. Don't get us wrong, it's actually ok to be uncomfortable with things that others are fine with. However, the decent thing to do is not look, and certainly not make a snarky comment, given the fact that there's a tiny baby reliant on being fed by mummy. We hope that he gets over his obvious hang-ups pertaining to human anatomy - hopefully his sister in law will be the perfect person to teach him.

Trending
Having a Baby in 2022?
The 'Playing Out' Age is Rising
The Proposed New 'Schools Bill' Explained
Mum Faceplants & Moons During Sports Day Fiasco!
ProductsAll
Too Big For Your Boots at schuh
Favourite Finds: Garden Playhouses
Favourite Finds: Garden Furniture for Little Ones!
The Best Baby Pools
Keep reading...
We've selected some similar articles you might find interesting