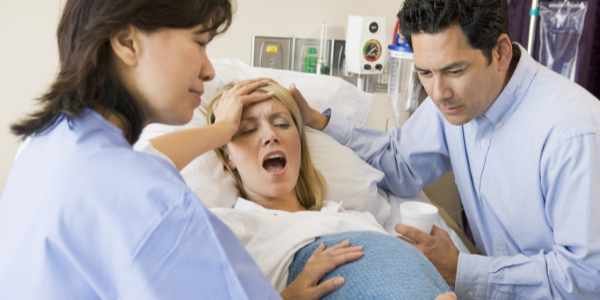 A mum has taken to TikTok to share here shocking experience of being shouted at for making lots of noise during her labour...

Every woman reacts to the pain of labour differently. Some of us moan, some of us moo like a cow, some of us scream and feel wildly out of control, and some of us, interestingly, go into ourselves and maintain a state of apparent 'zen'. At the time of writing, 66% of the mums in our online community shared that they made noise that they couldn't help during their labour!

Whichever mum you are, we're sure that you'll agree, it's NOT ok to shout and belittle a labouring woman.

Mum Yasmyn Switzer shared a video to TikTok detailing her experience, saying that the doctor delivering her baby "yelled at me to be quiet" as she went through a contraction. With more than 5.1 million views and a barrage of outraged comments, Yasmyn took to her Tiktok account to give more details and context to the story, which was her third birth after two previously unremarkable births.

She continued to describe the turn of events, sharing that she was asking for water while she was in labour but it took over half an hour for them to assist her, before demonstrating a dilation check on her in front of a trainee midwife without checking that Yasmyn was comfortable with this. Then, to make matters worse, the doctor arrived just as she reached the stage of pushing...

"The doctor came in right after my water broke, right before I started pushing. And as I'm pushing, I'm not screaming or being that loud but I'm moaning along with when I'm pushing my water out. I'm just kinda listening to my body as far as pushing with the contractions and everything.

In the middle of one of my contractions, as I'm pushing her out, I'm making noise and the doctor says something along the lines of, 'I'm going to need you to be quiet so that I can hear'. It was so rude. I've been with this doctor a lot throughout my pregnancies and she's always not had the best bedside manner.

I blacked out for a minute after she said that because I completely lost my focus and rhythm with my pushing but luckily one of the nurses snapped me back into focus and said, 'Just hold your breath and push' and I just looked at the ceiling and just pushed her out... I was pretty mad about the experience with the doctors and nurses."

Yasmyn's followers rallied to support her and validate her unhappiness in the comments.

Thousands of viewers commented encouraging Yasmyn to make a formal complaint, with one comment stating; "I would write the hospital a letter. So uncalled for! Especially at such a vulnerable time for you."

We were shocked to see other mums sharing similar birth stories, with many having being told off for making noises by hospital staff out of fear of 'scaring/disturbing other patients' - despite the obvious factor of them being on a labour ward, where surely birthing noises are to be expected!

On the other hand, a small number of people chimed in to - gently - point out that whilst the doctor does need a lesson in bedside manners, many professionals advise to hold your breath and bear down during a contraction, and by screaming, that energy is being expended elsewhere! However, there is no hard and fast rule when it comes to dealing with labour, so the unanimous verdict is that this doctor was unprofessional and lacked compassion - two very important factors when it comes to working with patients, especially those going through the most intimate and vulnerable times of their lives!

Trending
Having a Baby in 2022?
The 'Playing Out' Age is Rising
The Proposed New 'Schools Bill' Explained
Mum Faceplants & Moons During Sports Day Fiasco!
ProductsAll
Too Big For Your Boots at schuh
Favourite Finds: Garden Playhouses
Favourite Finds: Garden Furniture for Little Ones!
The Best Baby Pools
Keep reading...
We've selected some similar articles you might find interesting