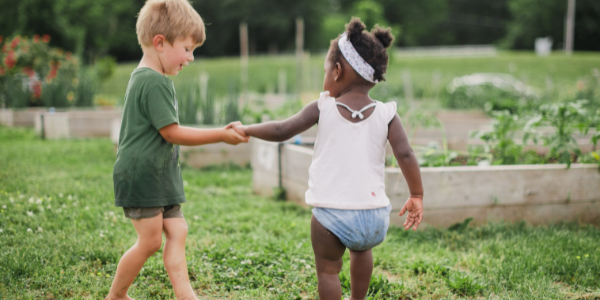 How to Help your Toddler Develop Friendships

Or maybe your child is the one sat playing alone in the corner.  Either way, helping your child foster healthy friendships is a great thing to do.

When do toddlers make friends?

You might have a bunch of friends whereas your friend might only have you as their bestie. Just like adults, kids vary in how they approach friendships. And they really don’t get going with friends until they’re about 3. Until this age you might see them play alongside other kids or actively ignore them, this is all normal.

Once they hit 3 they might start to meet other children at nursery or playgroup and ask to play with them using their name. But depending on how social your child is they might not be interested at all.

Once your child turns 4 you might see more of them differentiating between ‘friends’ and other kids they just know. But it’s common for children to just watch instead of joining in and friends can change on a daily basis. They might play in big groups or have one child they always gravitate to. However they play, you can help them learn to listen, share, be kind and learn the ground rules of friendship.

How can I help my toddler make friends?

Friends are important because they build your child’s self-esteem and confidence. It’s an important part of everyone’s social development so get those play dates booked in and make some new mum friends too.

Mum of a toddler and need some help and support? Join us on Facebook, 70,000 mums who know exactly where you’ve been.

Travelling With a Toddler

Surviving Pregnancy with a Toddler

Dealing with a toddler and a Newborn