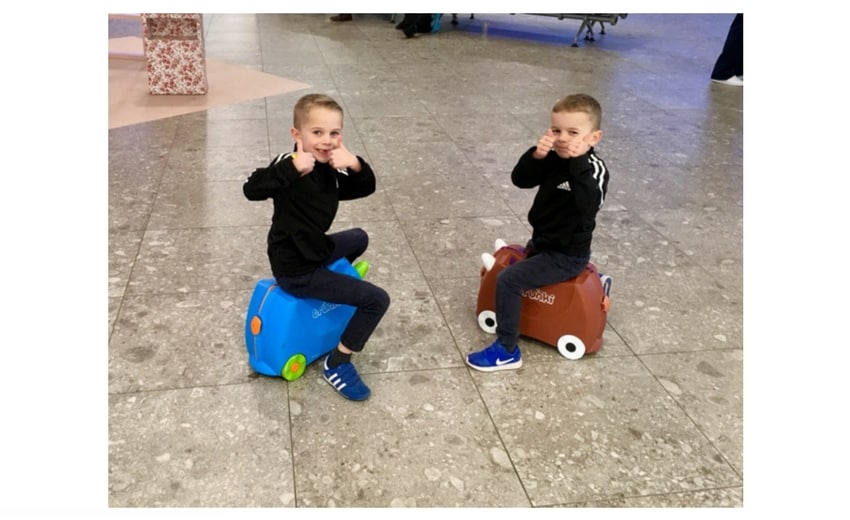 Travelling With Kids Id Rather Rub Wasabi in My Eyes Thanks.

I was absolutely thrilled to hear that while I was away in Tenerife with my very own seven year old Storm Dylan; there would be an actual Storm Dylan battering the north east coast. Call me a sadist but I always find a sunny holiday so much more fulfilling if you know the folks back home are having to install flood protection barricades, battening down the hatches and listening to the gales blowing off their roof tiles. I’m nice like that.

Rob checked in online for us the day before the flight. Again; I was absolutely thrilled to find out we’d all been allocated separate seats at opposite ends of the plane. Normally I had to deal with all three of my children while they’re going crazy with cabin fever, but not this time! Some other poor sucker was going to have to listen to Jonah ask ‘how long til we’re there?’ approximately every seven minutes. Some other poor schmuck was going to have to wipe up Dylan’s barf when the travel sickness kicked in. Result!

Packing for five people really is such a joy. I can’t tell you how much I enjoy it. Especially three days after Christmas when the entire contents of Toys R Us are in your house and you have nowhere to put them unless you build an extension or put your kids up for adoption so you can use their rooms for storage. Tempting, but frowned upon.

Anyhoo. Mustn’t grumble! We are very lucky indeed to be setting off for the sunshine, I told myself. By the morning of the flight I was almost as excited as the kids. This was going to be a brilliant day!

We got through check-in ok and headed up to security. Isn’t it fantastic now how you have to take your shoes off!? And the shoes of your many children of course! I love that. And belts. And hoodies. Empty your pockets. Fold up the buggy. Pass your baby to that stern looking woman so he screams his head off. Take your bobble out.

I love it all. Really makes for a stress-free transition into my favourite part of the airport…

Duty Free. Ahhhh I bloody love Duty Free (not even being sarcastic this time, I actually do). I love the smell of that perfumed ‘you’re almost on holiday air.’ Rob had stomped off ahead (standard) and I was pushing the buggy. Ooh I’ll just have a try of that new perfume I fancy I thought, and I might treat myself to a new lipgloss so I’ll go and check those out.

In the midst of my fragrant reverie I heard a clatter then a scream. I had done it again! Forgotten that I already had those two other children before Perfect Ellis. And those other two children had just had a race through duty free on their trunkiis (worst invention ever), one crashing into a lady’s wheelchair and the other into a stand of mini vodka bottles. Awesome.

We rammed some crap burgers from the airport bar down our necks because we didn’t have time to go to the nicer place since we were late for our gate opening (not that we should’ve worried about that as will later become clear).

We got downstairs into the hot stuffy overcrowded departure gate. Only 15 minutes before boarding! Excellent timing I thought!

The boys needed a quick wee and since I’m trying to foster their independence with that type of stuff, I said they could go in without Dad as long as they stayed together and came straight back. Well; that was a mistake. Five minutes later Dylan burst out of the loo howling laughing with Jonah following behind with a face-full of foamy soap in his eyes shouting ‘Maaam!!! I’m bliiiinnnddd!’ in true retro-Byker Grove-‘Duncan man I’m blind’- style. (I realise that sentence will mean nothing to a lot of people but I’m sticking with it. YouTube it. It’s a classic. You’re welcome.)

‘How the hell has that happened!?‘ I screamed at Dylan?

‘I just had soap all over my hands and I accidentally tripped and my hands somehow landed on Jonah’s eyes. It is funny though isn’t it?‘

It was at that point that the first ‘ding dong’ tannoy announcement came on that there was a provisional 25 minute delay. I could take you through the ludicrous excuses/announcements one at a time but it’s still too early for me to relive that particular horror, so I’ll just cut to the chase and say we took off five and a half hideous hours later.

As if the delay itself wasn’t bad enough; the bastards at easyJet had ‘helpfully’ done a call over the aeroplane tannoy to say that people needed to volunteer to swap seats so that our family could be together since they were not happy about the children flying solo, so to speak. You can imagine how very popular this made us with the other passengers at that stage of the proceedings.

I took my seat next to a perfectly nice looking old lady. She welcomed me so warmly by looking at Ellis and audibly groaning to her husband. ‘Oh God. Please tell me he’s a good baby?‘ she said to me.

Ooohhhh she was on dangerous ground here. Don’t even think about having a pop at my treasure pot, lady. Just you thank your lucky stars you’ve not been put next to those two little arseholes that my husband has been lumbered with. You know the two don’t you? Surely you can hear them!? Yes that’s them!

Rob: How many times do I have to tell you Dylan!? You cannot say FAGGOT!

The rest of the flight went fairly smoothly to be fair. The little arseholes turned out to be legends actually, and whinged way less than some of the adults onboard.

As we waited for our baggage, a woman came over and squeezed my arm; ‘I just wanted to say, those boys have been fabulous considering the day they’ve had, and your little girl is absolutely beautiful.’

I thanked her profusely. We might have had a hellish day, but at least at the end of it I had the daughter people are always telling me I must’ve wanted. Every cloud and all that!

A horrible twisty nauseating coach journey later and we finally arrived at our lovely hotel at 2.30am. The kids were very pleasant by that point owing to them being too tired to speak, and we all fell into bed with our clothes on.

The next morning Rob said to me (and this was no joke); ‘I definitely think we should go long haul next winter babeh. Yesterday showed that the kids can take it.’

Rob can find a new wife for that trip.