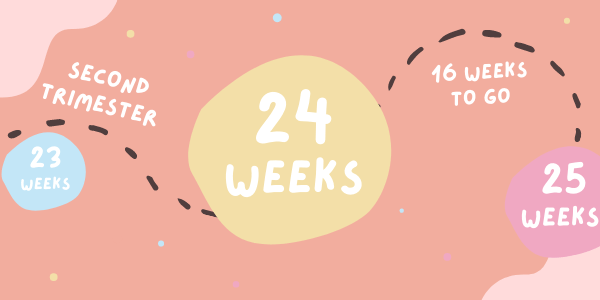 You’ve done it, six months down, three to go. And you’ve only got a few weeks left in your second trimester.

If your baby was born today they’d have a chance of survival. Before 24 weeks your baby’s lungs, heart, kidneys and other organs aren’t developed enough. But suddenly this changes and although they’d be very tiny and possibly face challenges they could survive.

This could be the week you have a glucose tolerance test if your midwife thinks you might be at risk for developing gestational diabetes.

And don’t be surprised if you suddenly can’t fit into your favourite shoes. It’s normal for your feet to go up a whole size during pregnancy because of your bones spreading and swelling. They often go back to your normal size after you have your baby.

With 16 (or so) weeks to go your baby now has a perfectly formed face. They’ve hit 30cm and it’s common for them to have gained a whole 100g from last week. That’s about the size of an aubergine, just be careful who you text that emoji to!

This week one of the biggest changes is your baby’s lung development. The branches inside are starting to form and the cells that let the teeny air sacs inflate are growing.

If you go into labour before you’re 37 weeks it's called premature labour. This only happens in about 8% of births but it can be a niggling worry.

Over the last few years doctors have got much better at treating preemie babies with around 60% surviving if they’re born at 24 weeks. This jumps up to 89% at 27 weeks, and at 34 weeks your baby stands as good of a chance as a full-termer.

It’s hard to predict how teeny babies will do, some don’t have any problems but around 1 in 10 have a disability like blindness or cerebral palsy. Sometimes there are reasons you go into premature labour, like an infection, but often no one knows why it happens. And very sadly some babies don’t make it, before 24 weeks this is classed as a miscarriage and after it’s called a stillbirth. There's lots of help and support out there if this happens to you.

And if you want to chat to others mum going through the same thing join our Facebook community.