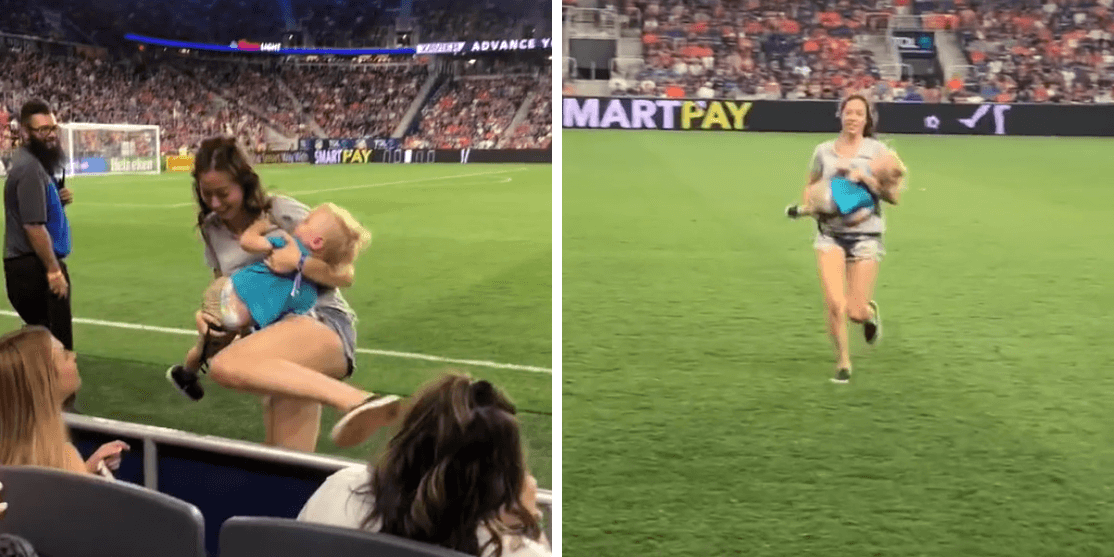 We’ve all been there… One moment the kids are right next to us, and the next they’ve vanished into thin air!

One particularly errant toddler was captured on camera making a run for a it at a Major League soccer game over in Moshow, Ohio. We have to say, we are particularly impressed by the determination two year old Zaydek Carpenter showed to get involved in the action, although his mums quick actions and slide tackle absolutely won the moment for us!

Check out the hilarious TikTok video below…

We think that mum Morgan Tucker showed some serious sporting prowess with her heroic dive to keep Zaydek away from potential injury!

After spotting that Zaydek had escaped their front row seats and was attempting a renegade pitch invasion, she leapt into action and managed to bring Zaydek to the grass before bringing him to safety, much to the amusement of onlookers. She told the media that it was his very first soccer game, and that her employer had invited them to enjoy the game.

During a chat with Good Morning America, Morgan said;

“I literally looked away for one second and saw he was under the fence and I was like, ‘Oh my gosh,’ I had to jump over the gate and then sprinted after him. When I slid and tackled him, I did not feel any pain but the next day I was sore for sure.

“I was so scared he was going to get hit in the head with a soccer ball. When I got him back over the fence I said, ‘What were you doing?,’ and he said, ‘Mom, soccer ball!'”

We hope that little Zaydek enjoyed the rest of his first live sports event without any further attempts to escape his mummy, and applaud Morgan for her quick thinking and calm handling of the situation.

Has anything similar ever happened to you? Do you have any great videos capturing the events? Drop us an email at hello@bumpbabyandyou.co.uk for a feature!

Tags
Life With A ToddlerToddler

Travelling With a Toddler

Surviving Pregnancy with a Toddler

Dealing with a toddler and a Newborn