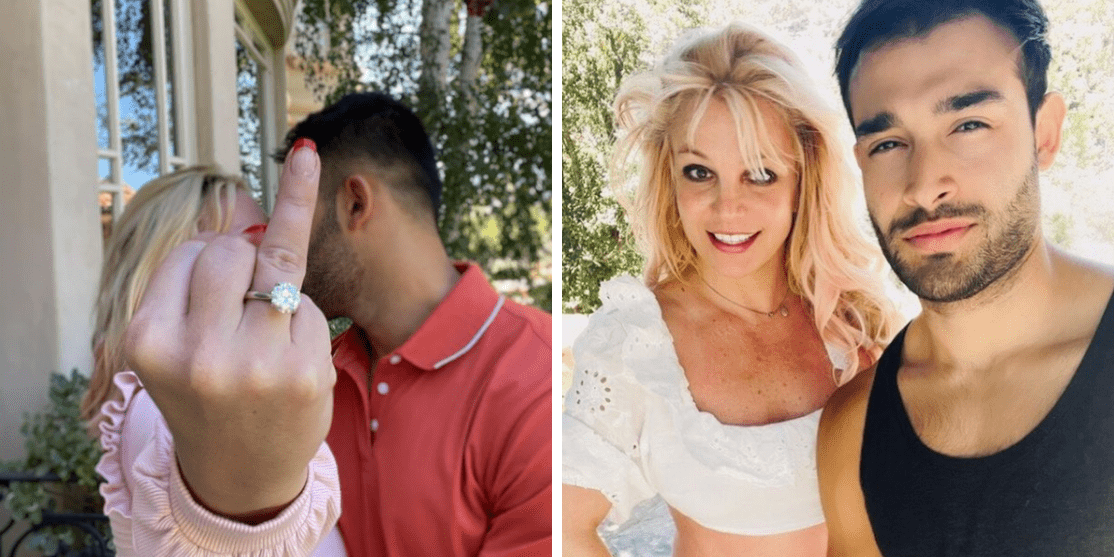 We’re so excited to share the news that Britney Spears is engaged!

A favourite of 90’s babies everywhere, most of us grew up listening to Britney – we’ve seen the highs and the lows of her life, from her pop superstardom and motherhood, to her very public mental health and conservatorship battles. Many of us can relate to her struggles! Britney has been through some wars, and we’re over the moon to see her coming out the other side on top with her new fiancé Sam Asghari.

If you’ve not been following the news over the past few years, here’s a catch-up…

In January 2008, Britney was admitted to hospital twice under a ‘psychiatric hold’, similar to what we would refer to as ‘being sectioned’ here in the UK. On the 1st of February, Britney was put under a temporary ‘conservatorship’ with her father in charge of this arrangement, meaning that he took over all decisions regarding her finances and life alongside an attorney.

In November 2020, Britney formally asked that her father be removed as her conservator and stated that she will no longer perform as long as her father has control over her career – a clear indicator of the state of affairs. She also told her attorney that she was ‘scared of her father’. In April 2021, Britney was granted the right to speak in court about her feelings, with documents being made public in June showing that Britney has indeed been fighting the conservatorship behind the scenes as fans suspected for years!

In June 2021, Britney gave her heart-breaking version of events in court, stating that she believes her father should be jailed for his actions, that she has been FORCED to have an IUD (contraceptive device), and not allowed to get married. Jamie Spears stepped down from the conservatorship in August, and he filed to end the conservatorship on the 7th of September.

Britney’s engagement is the clearest sign to date that she is getting control of her own life back!

After years of not being allowed to marry, it’s wonderful to see that clearly positive changes have been made for Britney going forwards. It’s really important news because Britney is a grown woman and a mother, regardless of her mental health status. So many of us mummies and daddies have our own mental health hurdles in life, it sets a dangerous precedent if our lives and finances can be taken over to such an extreme, and further adds stigma to mental heath conditions. Britney has been with Sam for over four years, and clearly they’re ready to make the next step in their future together!

We wish Britney and Sam a HUGE congratulations on their wonderful wedding news!

Watch this space for wedding updates… what colour do you think her dress will be? We can see her wearing something bright and exciting!

If you loved this, we think you’ll love…