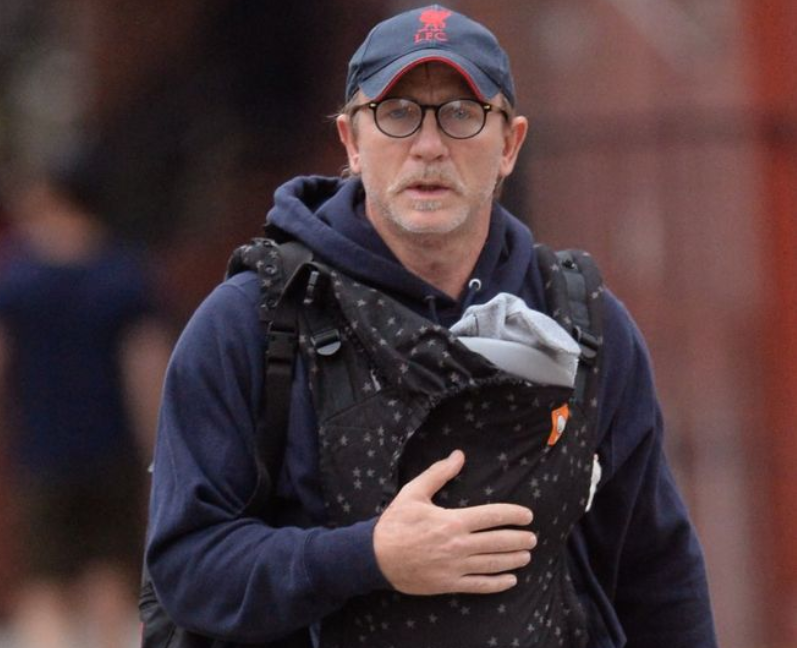 I’ll start off by saying that belittling Daniel Craig for babywearing doesn’t make you any more manly or masculine… it just makes you look like a total catty biatch, as well as old fashioned and completely uneducated on the benefits that baby wearing (and physical nurturing in general) has to offer.

Just look… yes, he looks like a typical knackered new dad. His participation in nurturing his daughter is great, there is literally nothing here to mock.

You hashtagged your Tweet with “Emasculating”… I would put good money on you being one of those parents who would never let their son push a toy pram or have anything pink as a young child, because it’s ‘girly’ and you feared it would make your son effeminate. Describing parents who disagree with you as a “shrieking twitter mob” just adds fuel to the fire. You put that tweet out there into the internet, so therefore YOU courted the response, you left yourself open to negative responses.

“I just hate papooses”… why? No explanation, no detail – if that is your closing response to defend your initial tweet, I have a feeling that your blustering response is you just trying to save face because you thought you were being hilarious and ironic, and it all backfired on you badly. Wearing a baby is just an alternative to pushing them in a pram – would you call him emasculated if he was tootling along with his daughter nestled in a Silver Cross? I don’t think so. He merely chose an option that is often more convenient for parents (especially in busy cities) and just so happens to have attachment benefits. There is literally NO link between gender/emasculation and how a parent decides to transport their baby.

We’re in 2018. Long gone are the days of women being barefoot and pregnant, doing all of the child-rearing whilst the rough rough daddy went out to work all day – some men still lack confidence and need support & encouragement to take an equal share of baby raising, and tweets like yours don’t help the cause at all.

Daniel Craig, you’re brilliant (not that we should be praising dads for doing what dads should be doing anyway) and setting an excellent example to new and expectant daddies everywhere. You keep on wearing that gorgeous baby and ignore daft pricks like Piers Morgan.