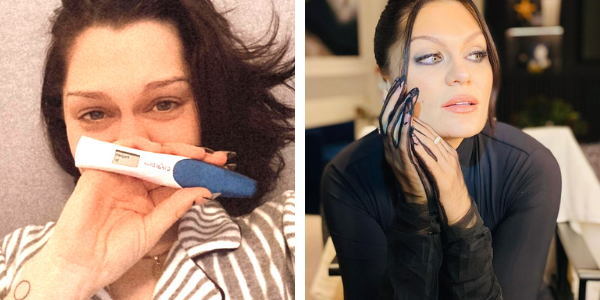 After a long journey with adenomyosis, and having been told that it would be unlikely that she would ever concieve, Jessie recently became pregnant unexpectedly, but much to her delight as she has always openly shared her dream of motherhood.

At her latest scan, Jessie's heart was shattered when she learned that her baby's heart had stopped beating. Jessie hasn't shared how far into her pregnancy she was, but she was devastated to be told that there was no longer a heartbeat during her third ultrasound scan. Jessie also revealed that she had decided to have the baby on her own after years of wanting to become a mother, and health problems affecting her fertility.

In a poignant Instagram post where she's showing herself holding a positive digital pregnancy test, the singer shared with fans;

By yesterday afternoon I was dreading the thought of getting through the gig without breaking down… After going for my 3rd scan and being told there was no longer a heartbeat.

Jessie went on to share that she had decided to have her baby on her own, after years of health issues impacting her fertility, and that whilst she was overwhelmed with sadness, she knows that she will exprience pregnancy again in future. We're absolutely rooting for Jessie - she's already proven the doctors wrong once by becoming pregnant naturally against the odds, and we hope with all of our hearts that she fulfils her dream and welcomes a rainbow baby some day soon.

If Jessie's experience resonates with you, you're not alone, and we're so glad to see a public figure speaking out about their experience. There's so much comfort and value in community - people who can relate to your trauma and talk about it with you in a way that you both understand and appreciate, contrary to attitudes about keeping personal things like baby loss private. If you choose to do so, that is also perfectly fine, but it's now considered incredibly helpful to share experiences to raise awareness of things that, once upon a time, just weren't discussed. This meant that when things like baby loss did happen, people felt more isolated, alone and uninformed.

If you're in need of support and advice, firstly, don't feel embarassed or ashamed. In the very apt words of Jessie J's famous lyrics, "it's ok not to be ok".

You don't need to 'stay strong' - don't hesitate to contact your GP as they may be able to refer you for talking therapy and other resources to support you and your mental health after going through such a traumatic and heartbreaking experience.

Tommy's and The Miscarriage Association are two great organisations that you can contact and access fantastic resources from, if you're unsure where to turn.

We're very supportive of awareness raising for topics that affect the mummies, daddies and families in our community - here are the best articles that you may find useful.

We send so much love to all of you who have been through a similar experience to Jessie J - in our online community of over 70,000, you will find many other parents who can relate, and lots of fantastic support and advice. There's nothing better than finding people who really 'get it', and we hope that it helps you too.