Katherine Ryan has shared that she has potty trained her baby son at under eight months old!

The comedian, 38, has said that she knows she will receive ‘backlash’ from some people who don't understand or agree with potty training a young baby.

Katherine, who has 12-year-old daughter Violet from a previous relationship and little Fred with her husband Bobby, went on to explain that she tries to bypass the nappy stage completely with her babies and train them to use a potty from the get-go. It has sparked some interesting debates on social media, with some parents fully endorsing the method, with others remaining skeptical. She told her legion of Instagram followers;

'I hate to even write this because I know I’ll get backlash but for those who know about my potty training ethos and success with baby Violet… Fred reliably wees on the potty at under 8 months and we can count the amount of 2022 soiled nappies on one hand. I have explained my method everywhere – my book, my podcast, BBC Room 101…. It’s so simple but takes dedication and an open mind.' 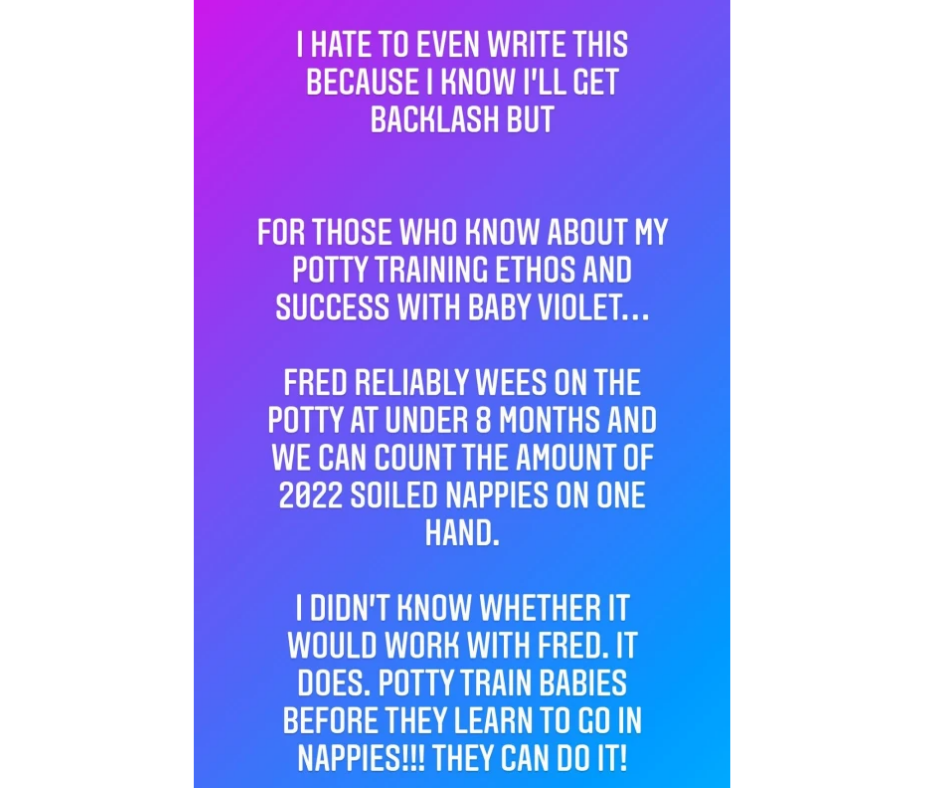 Katherine also shared a screenshot of a direct message from one of her followers who was considering trying Katherine's methods on her own 15-month-old baby. Telling her that she's 'too late' at this stage and explaining that a 15-month-old is 'smart and knows what he wants', she did go on to encourage the mum to give it a try, noting that it's 'impossible' to do once mum is back at work. 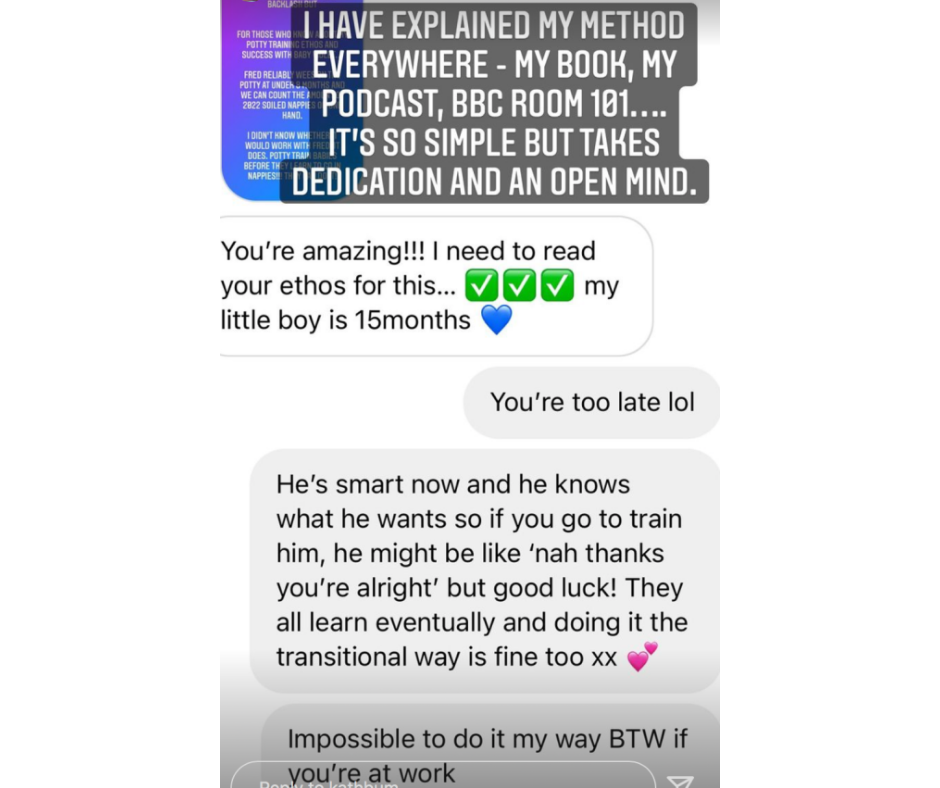 In the past, Katherine has shared her stance on Elimination Communication.

Explaining her theory that using nappies is 'training a child to soil themselves', she pointed out that children can be potty trained from a younger age than people often assume. In an interview with The Guardian, she admitted that she was planning to train Fred as soon as possible, stating...

‘Remember, the absence of training is still training. By putting them in a nappy you’re training them to go in a nappy. People can disagree, I don’t care. But I do care when I have to share a space with a four-year-old in a nappy.’

Katherine also touched on the topic in an interview with NME in 2015, explaining her journey with Elimination Communication and why she'd started to favour it over nappies. Her daughter Violet wore standard nappies at birth, but once on solids, Katherine was able to predict when Violet needed to poo, so she would place her on the potty and positively reinforce pooping on the potty with a happy celebration, followed by an 'hour of nappyless nudity'. We can definitely see the validity in this!

What is 'Elimination Communication'?

This article by The Nappy Lady explains the ins and outs of Elimination Communication really thoroughly, and it's well worth a read for anyone interested in giving it a go.

We asked the parents in our online parenting community what their thoughts are on Elimination Communication, and the majority were definitely sceptical. Could this be purely down to lack of information and that most people are just used to nappies being the 'norm'? Perhaps. It's a very interesting topic, nonetheless, with a small number of the mummies and daddies in our group using the method or being interested in trying it in future. We wonder if it'll become more normalised with time!