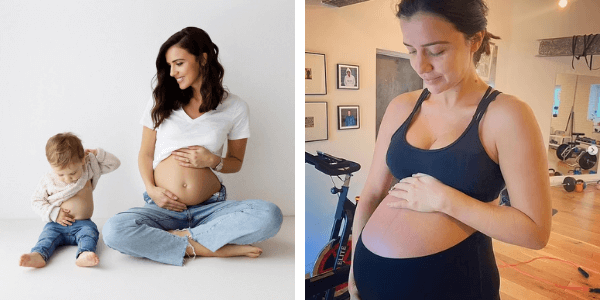 Lucy Mecklenburgh has announced that she is expecting her second Baby!

The 30-year-old former TOWIE favourite shared the exciting news with a picture of her baby bump on her Instagram grid on Monday afternoon. Lucy is already a mummy to her son Roman, who will be 2 early next year, and is engaged to Ryan Thomas who you may know from Coronation Street.

Their legion of fans and close friends were quick to share their congratulations for the famous couple; Coronations Street alumini Catherine Tyldesley penned 'Yeyyyy. Huge congratulations my loves', with thousands of other comments echoing her lovely sentiments. We're so excited to see Lucy and Ryan documenting their second pregnancy and becoming parents again - it'll be lovely to see Roman becoming a big brother too. We wonder how many of you have a similar age gap with your little ones!

Lucy shared a snap of Roman's cannulated hand accompanied by a scary array of tubes and wires, and in a screenshot of a note included in the reel of photographs, she explained that Roman was taken to intensive care and put on a ventilator after she found him 'blue in his cot'.

Lucy admitted she and Ryan may 'never fully recover' from the ordeal which we can totally understand. It must have been petrifying and we are SO glad that Roman appears to be recovering well. If there was ever a family deserving of a little good news after such a horrible time, it is this one!

Congratulations to Lucy, Ryan and Roman on their exciting news, and we also send all of our love to the family after the terrifying experience that they had too - it sounds like, beyond doubt, one of the worst nightmares of any parent.