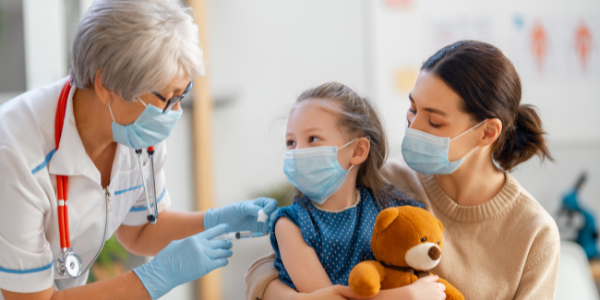 Parents are being urged to ensure that their children are vaccinated against measles.

It has been found that vaccine rates in England for measles are at their lowest in an entire decade, with more than one in ten school age children now going without the MMR vaccine which protects against measles, mumps and rubella.

It’s essential to get young children vaccinated against #measles, #mumps and #rubella to protect themselves and others from serious illness. Visit https://t.co/lq0LkKEfFg to learn more.#MMR #MMRVaccine 💉 pic.twitter.com/SC0PftTbeF

Figures show that between July and September last year, 88.6% of children in England had received their first dose of the MMR vaccine by the age of two. 85.5% had received both doses by their fifth birthday.

During the pandemic, over 22 million children missed their MMR vaccine

Parents were warned by the WHO and CDC of the potential for an 'explosive' global measles outbreak last November due to cancelled appointments and medics having to cancel or reschedule in-person appointments. The WHO took to social medial to spread the word and remind parents globally of the importance of vaccinating.

During the #COVID19 pandemic, millions more children around the 🌐 missed out on lifesaving vaccinations.

Why is it important to vaccinate against measles?

Measles isn't the mild, 'rite of passage' illness that some people may make it out to be for everyone! While most children can get through it without too many issues, for many children (and adults), it is a severe illness that comes with many very serious risks, which can be avoided by vaccinating. Since the vaccine was introduced in 1968, it has prevented an estimated 20 million measles cases and potential 4500 deaths in the UK!

Measles can cause the following complications;

Why has the vaccine uptake dropped?

As previously noted, the pandemic meant that a lot of surgeries were unable to see people in-person, so a lot of children missed out on jab appointents that were either rescheduled or cancelled, so please get yours rebooked if this applies to you!

Research undertaken by the Department of Health and Social Care and the UKHSA, as well as finding that there is a huge lack of awareness surrounding the complications of measles, also found that only 38% knew that measles can kill and that vaccinating gives 99% protection against measles and rubella.

Old debunked misinformation about the MMR vaccine is sometimes also given as a reason for reluctance to take the MMR vaccine, but this has been disproven, with autism now being known to have strong genetic roots.

Dr Vanessa Saliba, consultant epidemiologist at the UKHSA, has shared:

'The MMR vaccine offers the best protection from measles, mumps and rubella which is why we're calling on parents and carers to make sure their children are up to date with their two doses. Even a small drop in vaccine coverage can have a big impact on population immunity levels and lead to outbreaks.'

We hope that this information helps you all, and are really glad that the UKHSA, CDC and WHO have made sure to publicise this issue to ensure that we're able to protect our communities against nasty diseases.