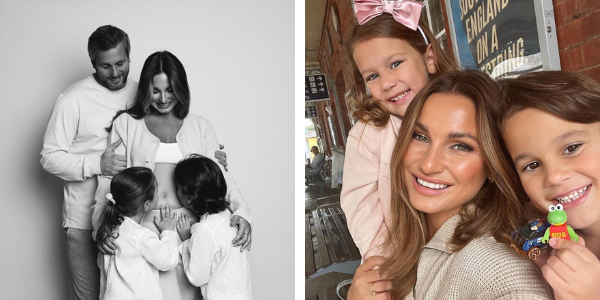 Former TOWIE star Sam Faiers has announced that she is expecting her third baby!

Mummy to Paul (five) and Rosie (four) with partner Paul Knightley, Sam has shared that she feels 'happy and blessed' to be expecting her third child.

Alongside a lovely photo of her two children kissing her baby bump, Sam also shared that they’d be keeping the gender of the latest addition a surprise. When previously asked about the age gap between her kids and their future baby plans, Sam admitted...

'Personally I found it a little difficult in the early days as I was breastfeeding Rosie whilst Paul was still in nappies and wanting my attention a lot. I wouldn't change it for the world. But when we have more I think it would be maybe next year? Who knows.. @PaulKnightley.'

The announcement shows that Sam has been dropping some little hints to her followers recently! Just days ago, Sam admitted that she gets 'so emotional with babies' when she and fellow reality star Luisa Zissman visited an orphanage in Moldova and spent time with the babies and young children living there, to help with awareness raising efforts and also to fundraise for things that the facility is desperately in need of.

They raised a huge £100k for the orphanage after sharing videos and photographs of their time there, urging fans to donate to the good cause - how philanthropic, well done Sam and Luisa!

Fans of Sam and her sister Billie were gutted when Sam announced that she would be quitting The Mummy Diaries in June, as the show has gathered a rather large fanbase.

We were also really sad to see Sam leaving The Mummy Diaries as we’re big fans. Her sister Billie posted on Instagram to confirm the show's new title will be ‘The Family Diaries’ and thanked their fanbase for their love and kindness after Sam admitted that she 'needed a break' from filming.

Billie wrote: 'As one journey ends another begins …. And What an incredible journey it has been ❤️ filming with my sister and family for the past 7 years has been the most wonderful experience and we truly have made the BEST memories all together Filming @mummydiariesoffical.'

We send all of our love and a huge congratulations to Sam, Paul & their kids and wait eagerly in anticipation for baby number three...