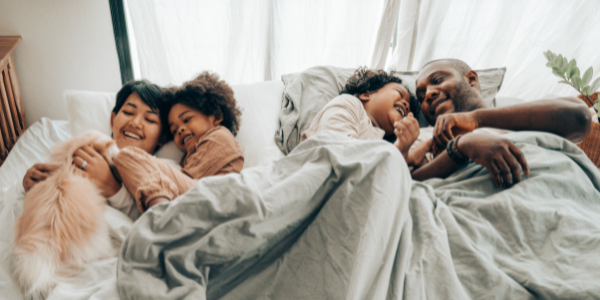 A TikTok couple have gone viral with their video explaining their sleeping arrangements.

Chrissy Clark took to the platform to 'normalise couples sleeping in separate beds' and the response was overwhelming! Hundreds of people leapt into the comments section to explain that they too have similar sleeping arrangements, with many making the choice due to...

Chrissy and her husband Tom have been together for 16 years, and started to sleep apart after Chrissy became unwell with a cough a few years into their relationship. In the end, they decided to continue with this arrangement due to their very different sleep environment preferences, with Chrissy needing a dark room and firm bed, and Tom needing natural light and a soft bed. She went on to share;

"Sleep quality has improved our marriage. I am not cranky, and neither is he. We still cuddle in bed and watch TV, but when it is time to sleep, he will go to his bedroom to sleep. Sleeping in separate beds does not equate to a bad marriage. If anything, it improves it for us."

@tiktockchrissy #stitch with @liddylidds we have been married for almost 14 years! We both need our beauty sleep 😴 #fyp #marriedlife #seperatebeds ♬ Claire de Lune - Ave Maria

This has us wondering... just how many of the parents in our community sleep separately, and why?

We shared a post in our private community group asking for insight. How many members have separate sleeping arrangements, and why? Our two poll options didn't take into account the small number of members who sleep apart from their partner for reasons other than choice - it's worth noting as some of you may relate! The main reason for this was co-sleeping, with one parent struggling to cope with little limbs prodding them all night, so they often traipse off to the spare bedroom.

Out of 747 votes, 7% revealed that they sleep separately. This doesn't seem like a big number, but it's not far off 1 in 10 couples, so in perspective, it's not uncommon at all. This is great for those of you who may have felt a bit odd for doing this! Lots of parents shared that sleeping apart doesn't affect their love life or intimacy at all, and that getting a refreshing nights sleep has helped them to actually be LESS irritable with their partner. Our favourite response explaining separate sleeping arrangements was from Kayleigh...

"If we had a spare room, I would definitely sleep separate! He snores like a walrus with asthma and I can't cope some nights!"

Oh Kayleigh, we really feel for you, and know that lots of readers will be relating to this conundrum HARD.

Sleeping apart is often assumed to be a passion-killer, but the reality can actually be the opposite. Fundamentally, there's more to romance and intimacy than sharing a bed, so if you're struggling to get a night of refreshing sleep, and you have the space... don't rule it out. At the time same, the majority of couples do still sleep in the same bed - whatever works for you and your family.