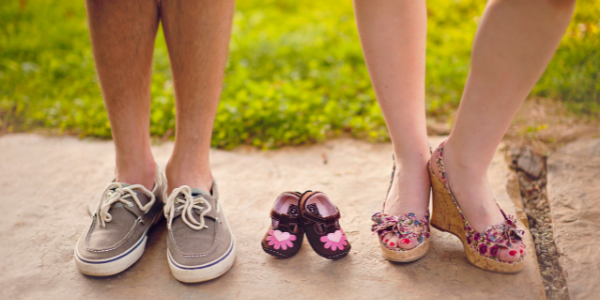 Anxiety about other people announcing your special news is commonly experienced by expectant parents.

It's one thing if it's a well-meaning, excited relative accidentally letting slip on social media, but what if it was someone not even related to you, who you'd not even told, but they had been having a nose at your private paperwork - in front of everyone you work with?! This expectant mama took to Reddit to ask... is she the asshole for threatening to report her colleague to her manager? Read on for the full situation. 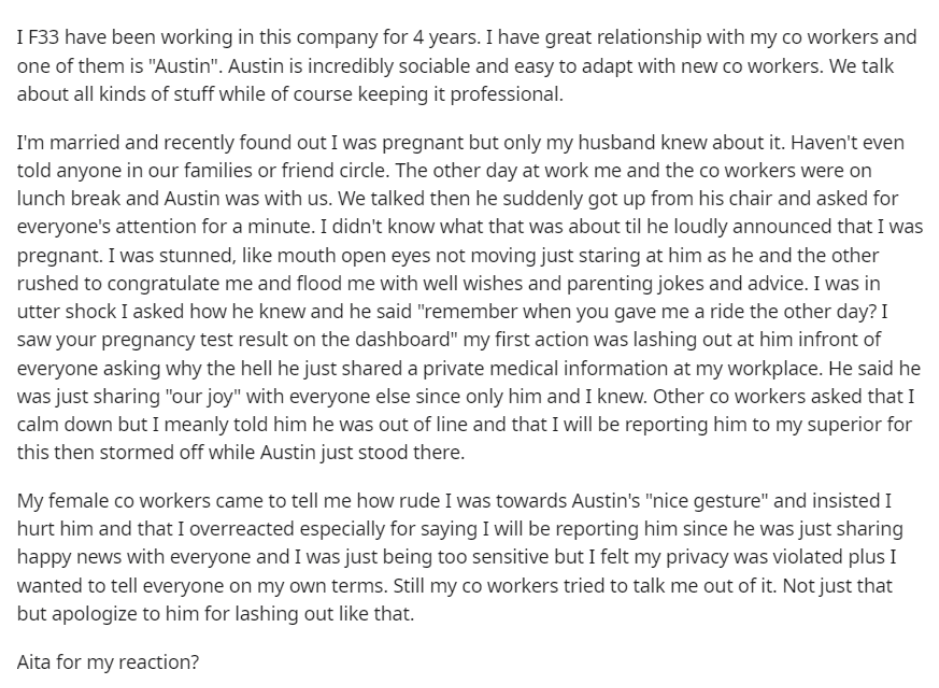 Ooft. It's hard to remain unbiased on this one, right? We're on team 'NTA'.

The expectant mummy paints a positive picture of Austin; he doesn't seem to be a malicious person, but he certainly lacks important boundaries. His actions are highly inappropriate, and we think that she would be doing the right thing to raise a grievance about personal information being shared with others. This could be addressed professionally, and it might even help Austin by giving him insight into his behaviour that he hadn't had before. Sometimes, you have to be 'cruel' to be kind.

As for reading private medical documentation, as it happened out of work, that would probably be off the record from where their employer stands, but again, mum is 'NTA'. This is a huge violation of her privacy, and the comments section on the original post fully agree with her, contrary to the colleagues that the poster mentioned chastising her for her reaction! In fact, a lot of comments pointed out that these colleagues are actually more deserving of the 'asshole' award than the poster, or even Austin!

Our favourite comment really hit the nail on the head...

Witchywomun took to the thread of 2500 comments to point out some very importany facts.

"It was not Austin’s story to tell. At the very least he should have confirmed it with OP, then she’d have been able to tell him not to say anything. A lot of pregnant people wait until the second trimester to say anything about their pregnancy because of the risk of miscarriage. Him blurting out news that OP was not ready to reveal just put her in an awkward position, especially if (Gods forbid) the worst case scenario happens. What’s she going to do, then, have him make a similar announcement for her? Nah, Austin is an asshole and needs to have a come to Jesus conversation about sharing news that’s not his to share."

Exactly! What if this pregnancy was at risk due to health problems, or, as another commentor pointed out, a past pregnancy that had actually been lost, leaving the poster in a highly awkward situation not to mention incredibly distressing?

NTA, without a doubt. We don't think that Austin is a malicious person, but he has a lot of learning to do, and the colleagues defending him are actually enabling his behaviour as well as discrediting the feelings of the poster, which we think is really unfair.