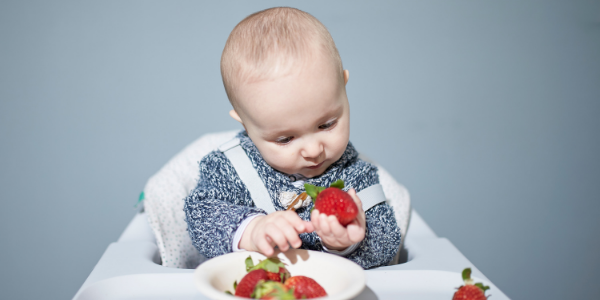 AITA: Dad Calls Out Mum For Lying To Doctor

That said, it's pretty normal to disagree with your co-parent (if you have one - we applaud you single parents) about things, every now and then. However, this Reddit dad's situation took parental disagreements to a whole new level!

In the UK, our safe weaning guideline is 6 months, unless advised otherwise by a medical professional. In the USA, some doctors don't follow the WHO guidance and advise weaning from 4 months, to clarify for our readers and give context for the post we're about to share. These guidelines were different in the past, but in 2003 the UK Government changed their official advice to 6 months to fall in line with the WHO, whose policy is based on advances in scientific research.

This protective daddy was really not happy with his wife, whom he caught lying to their daughter's paediatrician about giving her solids since ONE MONTH of age. He took to Reddit to ask, is he the asshole for calling her out about it in front of their paediatrician after lying about only giving their baby formula? 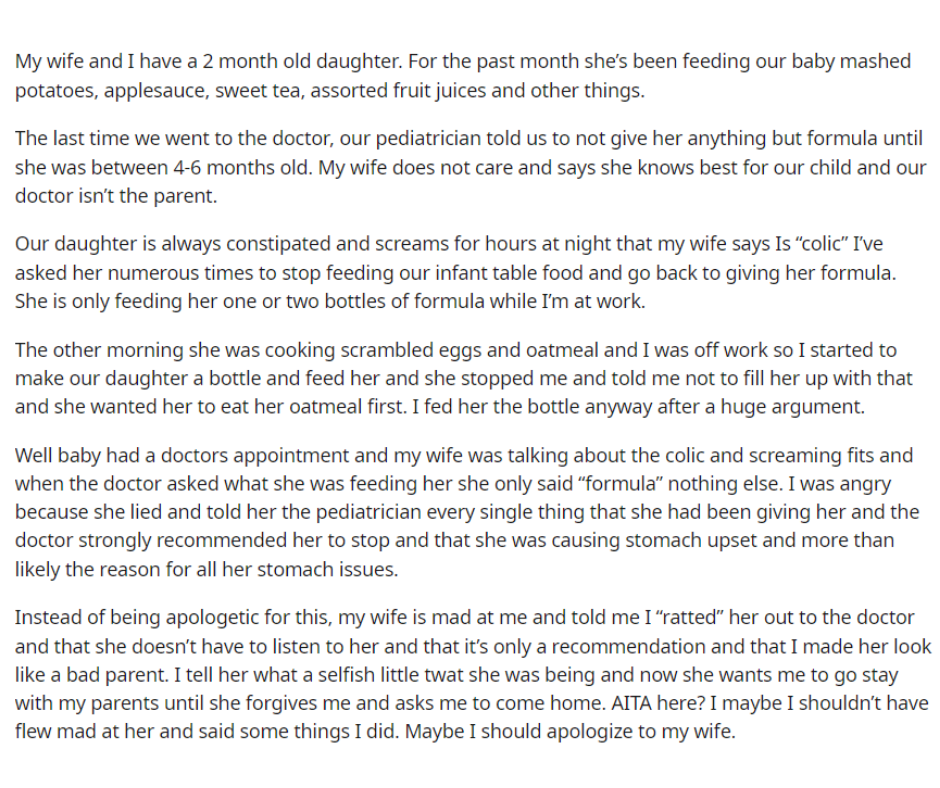 What was the overall verdict?

The general consensus in the comments was that daddy is 100% NTA - not the asshole - for telling the paediatrician what was really going on. A few comments pointed out that his wife might in fact be struggling with her mental health, given her reaction and refusal to stop giving the baby solids so young despite the stomach ache it is clearly causing. The top voted comment was...

"NTA. What your wife is doing to your daughter can cause long term damage to her digestive system. Not giving her formula can also contribute to her loosing weight and not growing. I would suggest you talk to your pediatrician away from your wife for her to get a full picture. Its abuse.

Edit: Because this is at the top, OP I urge you to supervise every feeding. Your daughter can choke to death having food, she’s not ready for anything but milk. This is extremely serious."

We're glad that this protective daddy took it upon himself to share his concerns with the paediatrician, and we don't think he's the asshole, but we also think that mummy may need some professional help and support too. Lying to the paediatrician to cover up what she was doing is concerning behaviour, but looking at the bigger picture, it sounds like it would help for her to sit down and talk things out with a professional.

One comment by the original poster in a later thread shared that his wife had seemed 'out of it' lately, and beyond the obvious cause of sleep deprivation, some comments pointed out that this could be a sign that there are mental health concerns going on. She's a new mum, and deserves some empathy.

We're glad that daddy is on the ball, that the paediatrician was firm in their advice, but hope that the mum is getting the right support too.

UPDATE: Dad's mother came to take the baby away due to worries about mum, a crisis helpline was called due to mum's behaviour after she locked herself in a bathroom, and there's no further update after that however it's good news that mum's health is being addressed.