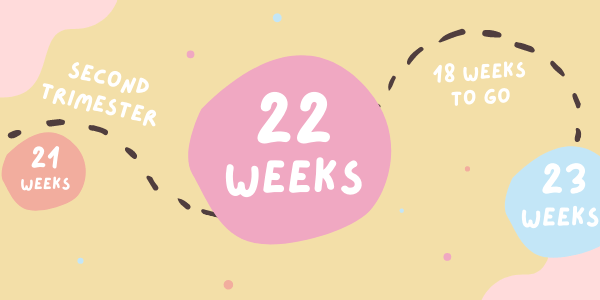 Are you going to have a baby shower or gender reveal?

You might love the idea of a fuss (and an excuse for a party) but if you’re a bit more low key give yourself permission to skip the festivities.

It’s normal to feel anxious at this stage, especially if you’re under pressure to do things you really rather pass on. Don’t be scared of making your feelings clear and saying you’d rather do something at later date.

Your baby is now 27.5cm. Lots of websites tell you this is about the size of a papaya (does anyone know what one of those actually looks like??)

Your baby now has tiny creases on their palms and is reaching out to touch things including stroking their face. If they hear a loud noise they might give a little jump or kick in response. And you’ll probably notice they’re falling into a pattern of wake and sleep. And yes, they do like to party at night because your movement in the day tends to rock them off to sleep.

I think I’m having contractions?

During your second and third trimesters, you can get sudden tightening pains in your stomach. They can be surprisingly ouchy and it’s easy to panic and think you’re about to go into labour. But it’s most likely these are false labour pains, also called Braxton Hicks. Not everyone gets them but if you do here’s what you need to know:

Want to chat to other mums about Braxton Hicks? Join our Facebook community.