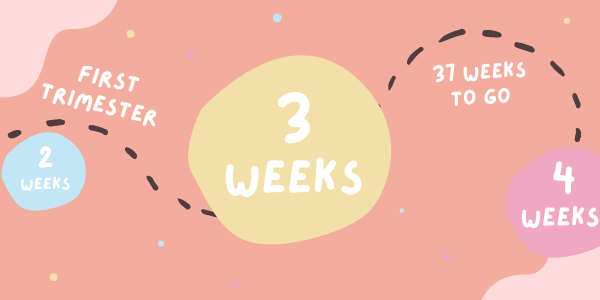 If you read Week 2 of our pregnancy countdown you’ll know you’re not (quite) pregnant.

But this is the week when it all starts to happen.

You won’t be officially pregnant for another couple of weeks (around week 4-5) but this is baby-making time. Your egg was released and if it's met up with some sperm then life begins. Fertilisation, when the egg and sperm meet, is how your baby starts life. It begins as just one teeny cell and this week grows into a clump of cells called a blastocyst. But you can’t see it as it’s about the size of a pinhead.

Your little fertilised egg, now called a zygote, goes crackers, dividing from one cell into two, two into four and on. It drifts gently down your fallopian tube over the next 3 to 5 days, landing in your uterus and becoming that lovely little blastocyst.

What are early pregnancy symptoms?

Your body is up to all sorts but you probably won’t notice anything different. You might get a bit of bleeding or spotting when the tiny egg implants in your uterus. It can be hard to tell the difference from a period and it doesn’t happen to everyone.

If you’re actively trying to get pregnant then waiting to do a test can be an odd time. It’s normal to feel nervous, excited and scared. If you need someone to hold your hand pop over to our supportive mum community on Facebook.

And we know it’s hard but try not to take a pregnancy test yet. Your body starts to produce the pregnancy hormone hCG (human chorionic gonadotropin) this week but you can’t wee enough out for a test to detect it. So if you pee on a stick this early and it’s negative you might still be pregnant.

If you’re having fertility treatment then this is your two-week wait. If you test too early you can get a false positive so as stressful as it is try to hold on.

The best thing you can do this week is keep relaxed. Swimming, yoga or walking are great for clearing your head. And don’t forget those veggies and pregnancy vitamins.